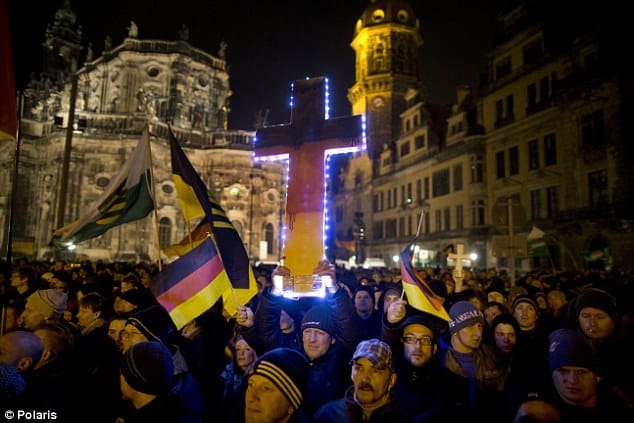 Last time PEGIDA (Patriotic Europeans Against the Islamization of the West*)  tried to rally their troops, it was the police that stopped them claiming that threats from ISIS is a hazard for public safety.  And while PEGIDA is hated by many in the German government including Merkel, PEGIDA persisted to whom even Merkel had to respond to an ultimatum: does Germany stand behind the right of assembly, or has Germany become Dhimmi buckling under Muslim pressure?  With PEGIDA, it was Merkel who buckled and vowed to protect the right of PEGIDA to demonstrate in Germany.

And while PEGIDA were accused of being “Nazi” and “Fascist” PEGIDA decided to debunk all such claims and brought in an Israeli flag in honor of the Jews when leftist announced that they were going to mount a massive counter-demonstration on Monday to disrupt the PEGIDA event. PEGIDA organizers had to act quick and within just 48 hours were able to muster the troops and decided to hold the demonstration on Sunday (today) instead of on Monday, their normal day, to avoid violence from leftists and despite what the media claimed, they brought in even more massive numbers than before.

AMAZING! Even more amazing, PEGIDA is spreading all across Europe. 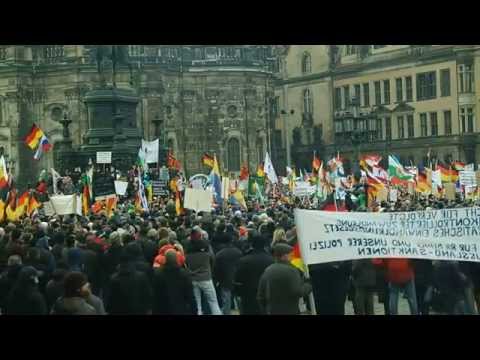 PEGIDA tonight proudly marched carrying a massive lit-up Crusader style cross, that every follower of Christ can be proud about:

For centuries the Saxony region of Germany has been a place where protests are born. It has been relatively quiet there for the last quarter of a century. but 25 years after German reunification, Leipzig and Dresden are once more igniting the flames of dissent, especially when PEGIDA proved itself today to the whole world, and against all odds stood up tall telling the Muslim world that Germany will be a Christian land and that Islamic immigration will soon be halted.

In Europe, the war on the righteous is ongoing and the future of the Islamization of Europe stands in the hands of an anti-Islamization group called PEGIDA which is primarily centered in Germany.

“Pray for us” writes Peter asking Shoebat.com’s viewers to constantly remember their brethren in Germany. PEGIDA requested westerners that since the liberal media is against them in Europe, they urge everyone to spread the word through social media in hope that all the West will arise against Muslim tyranny.

Indeed, if ISIS spreads terror through social media and Muslims march by the millions across the world against westerners for simply exercising their free speech; westerners sick of terror and liberal media can spread freedom and anti-terror through the same system.

So PEGIDA, using social media has become the latest and loudest voices against the Islamization of Europe calling themselves the Patriotic Europeans Against the Islamization of the West (PEGIDA). And as al-Qaeda and ISIS grows around the world, PEGIDA will lead the European masses and will hold the future of Europe, so long they carry the blessed holy cross and honor the rights of the Jews to live in Israel.

And despite all the odds, PEGIDA has led peaceful demonstrations that have been met with angry counter-protesters who have resorted to violence in an effort to halt PEGIDA’s mutiny against Islamization, one can see for themselves who PEGIDA is; the regular folk of Europe just as in the United States:

In much the same manner as the conservative revolt against media bias in the United States, PEGIDA, and its followers, use the term luegenpresse, which is German for “liar press.”

As with the “political correctness” of the media and the left in this country, PEGIDA’s grievances are largely the same.

Following a rally through the streets of Leipzig last Wednesday 40,000 demonstrators showed up and despite what was not reported it was the largest demonstration since those that took place back in 1989. And tonight, on an emergency rally, PEGIDA within 48 hours was able to muster 25,000 demonstrators.

“We were 25,000+ anti-Islamization demonstrators, the media is downplaying it and says it was somewhere between 17,000-20,000″ says Mr. Schmidt reporting to Shoebat.com adding “but at this Sunday afternoon the rally gathered even more people than on december 22nd!” adding “People came from all over and the organizer of the rally even had to ask 3 times to tell people to move closer together since more and more people were still trying to join the rally.”

“Since the PEGIDA team switched the rally from Monday night to Sunday afternoon and they did that on friday early afternoon and within 48 hours Pegida Dresden mobilized 25,000+ germans who had enough with islam, enough with political correctness, enough with the lying media and hypocritical politicians.”

Tomorrow will be a big day for PEGIDA (we will keep you updated so stay tuned) which called on Europeans to show up at rally points:

And it doesn’t stop here, on February 2nd, there will be the first Pegida Austria rally in Vienna.

“PEGIDA is far from being over, it is spreading everywhere” says Mr. Schmidt.

Geert Wilders, the founder and leader of the Party for Freedom which currently is the fourth largest party in the Dutch parliament sent an open letter which reads this:

“From Geert Wilders:
My dear friends in Dresden, What is taking place here in Dresden  is truly fabulous. Dresden is leading the way. All of Europe is watching you. You are not alone. You are part of something huge. In Germany, in  Holland, in all of Europe. You are fulfilling the hope of many. You are  the voice of the population against the elite. You are the people!

Enough of terror and hatred. Enough of attacks, enough of bloodshed. Enough of Islamization, which betrays our Judeo-Christian identity and our  traditions, which destroys the future of our children and which is  selling out our countries and our civilization. In all of Europe people are saying: “We are the people!” And we are sick of it!

I support you with all of my heart. Millions all over Europe support you. I am proud of you. We want what you want: a free people, a free country, a civilized country and no Islamization. Let us fight together for all this. No one can stop us. Long live freedom!
— Geert Wilders

Taking a page from the protests of 1989, the PEGIDA marchers employed strategies learned from their parents a generation ago using remarkable self-control and peacefulness. Joining the newcomers, some protest veterans, who also marched in ’89, were visibly proud of the heritage of their region with its historical ability to use massive dissent as a positive means of change.

The protest movement has gained considerable strength in the aftermath of the Charlie Hebdo attacks in Paris earlier in the month.

Europe has long used appeasement as its approach to dealing with immigration, especially within Muslim communities.

Now, as Oliver Lane says in an article for Breitbart News, “Many people in Germany are questioning the post-war consensus that unlimited immigration and multiculturalism (or ghettoisation) is inevitable and desirable for the first time in their lives, and the freedom of thought bug appears to be spreading. A PEGIDA march has even taken place as far away as Bulgaria, with movements planned in many European countries.”

In the United Kingdom, a PEGIDA march is scheduled in the next few weeks in a northern city in the country. As with France and Germany, Great Britain has also been plagued by the lack of assimilation by Muslims.

Here is a German song, composed by Walter von der Vogelweide, singing about Christendom’s crusade and holy war to take the Holy Land from the Muslims: 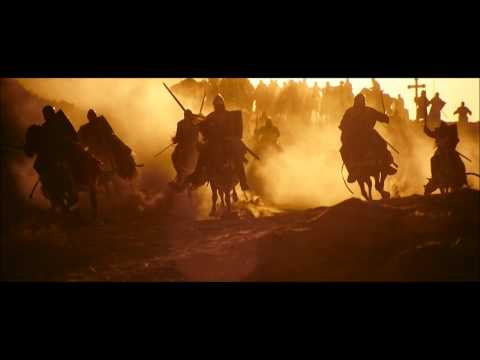 Here are the lyrics:

Now my life has gained some meaning
since these sinful eyes behold
the sacred land with meadows greening
whose renown is often told.
This was granted me from God:
to see the land, the holy sod,
which in human form He trod.

Splendid lands of wealth and power,
I’ve seen many, far and near,
yet of all are you the flower.
What a wonder happened here!
That a maid a child should bear,
Lord of all the angels fair,
was not this a wonder rare?

Here was He baptized, the Holy,
that all people might be pure.
Here He died, betrayed and lowly,
that our bonds should not endure.
Else our fate had been severe.
Hail, O cross, thorns and spear!
Heathens, woe! Your rage is clear.