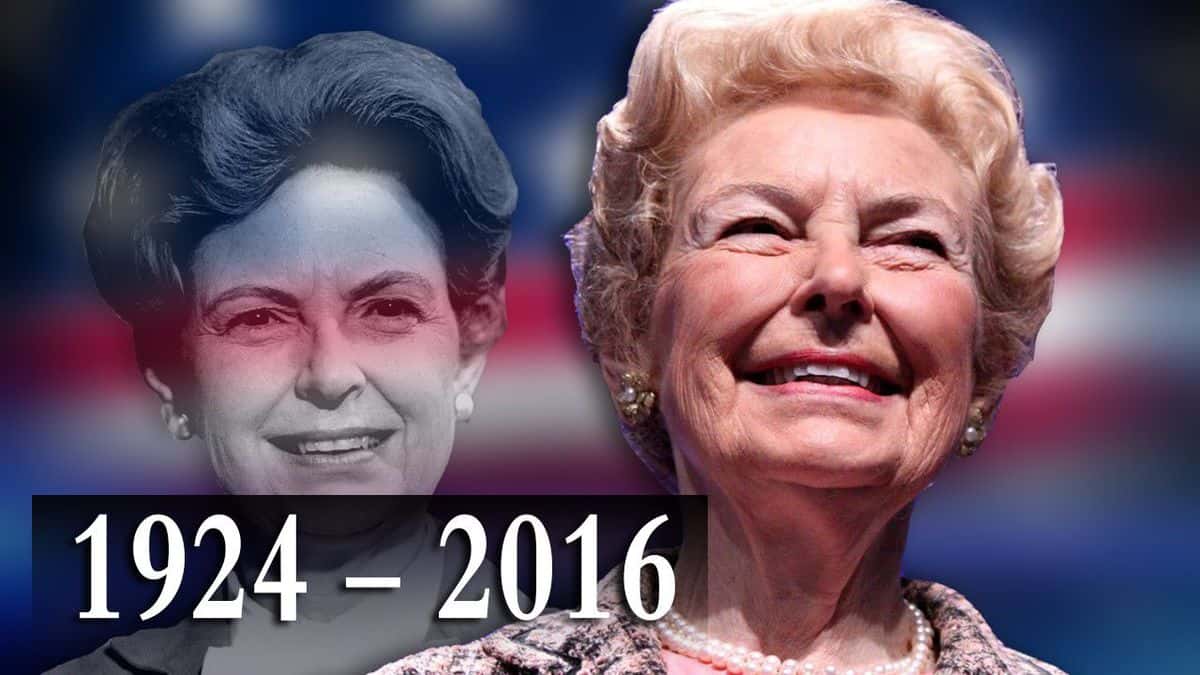 Phyllis Schlafly passed away this week at the age of 92. She was the matriarch of the pro-life movement. It might be safe to say that the national Republican Party would not even have a pro-life plank in its platform without the influence of Phyllis Schlafly. Founder of Eagle Forum, Phyllis was possibly the most influential woman of her era. She was a modern-day Abigail Adams. Our paths crossed several times. I never knew her to be anything but the perfect lady. She was a wife, mother, grandmother, great-grandmother, scholar, freedom fighter, and role model.

Sadly, the last few months of her life were enmeshed in betrayal and attack–not from her enemies, but from her so-called friends and even from a family member. They were angry with Phyllis because she publicly supported Donald Trump for President and not Ted Cruz. They were so vindictive and hateful that they attempted to wrestle control of Eagle Forum away from her over it–even to the point of taking Phyllis to court.

In my way of thinking, the attacks against Phyllis from her so-called friends–especially at her age–may have directly contributed to her sudden demise. No one but God will ever really know.

It is my personal (and I do mean personal) experience that Christian-Zionists–which is what Ted Cruz’s campaign mostly attracted–can be among the most mean-spirited, hateful, and vindictive people on the planet. They swarmed on Phyllis like sharks in a feeding frenzy.

Of all of Phyllis Schlafly’s bravest and most courageous acts (which were very many–including the way she recently urged Wisconsin voters to reject Neocon House Speaker Paul Ryan in his primary election), her decision to NOT support the Christian-Zionist, Ted Cruz, may have been her most heroic. And she may have paid for that decision with her life.

Back in April of this year, I wrote this about Phyllis and the attacks against her:

The matriarch of the pro-life, pro-family, Christian Right movement is the elegant stateswoman Phyllis Schlafly. She has no peer; there is no close second. At age 91, she remains the icon of America’s pro-life community.

Phyllis received her B.A. from Washington University, her J.D. from Washington University Law School, and her Master’s in Government from Harvard University. She worked her way through college on the night shift at the St. Louis Ordnance Plant testing .30 and .50 caliber ammunition by firing rifles and machine guns and as a laboratory technician investigating misfires and photographing tracer bullets in flight.

Mrs. Schlafly is an attorney admitted to the practice of law in Illinois, Missouri, the District of Columbia, and the U.S. Supreme Court. She and her late husband are the parents of 6 children and the grandparents of 14 grandchildren. Phyllis personally taught all of her children to read before they started school.

It is no exaggeration to say that Phyllis is the single person most responsible for defeating the Equal Rights Amendment and has been one of the most influential personalities in politics over the last half-century. She founded her Eagle Forum organization in 1972, and today over 80,000 people claim membership.

See this Breitbart report on Phyllis:

One would think that the pedigree, accomplishments, and lifetime efforts of Mrs. Schlafly would speak so loudly and clearly that no one–not even her political adversaries–could question her sterling character and steadfast convictions. At age 91, and after all of her hard work, Phyllis should be enjoying the most happy fruits of her labor and the most heartfelt appreciation and respect of everyone who knows her–and especially of the Christian conservative community throughout this country.

What, you ask, could be the awful sin, the horrific iniquity, the egregious act of malfeasance Phyllis could have committed to warrant such an attack? Answer: she endorsed Donald Trump for president.

Mind you, these attacks are not coming from the political left. They are coming from Christian conservatives within Eagle Forum. And from a political perspective, the people who mostly want to destroy Mrs. Schlafly are, guess who: the Ted Cruz supporters, that’s who.

Ted Cruz’s base of support is comprised mostly of Israel-First evangelical Christians. Prophecy preachers from all over America have declared Ted to be God’s “anointed” presidential candidate. These end-time evangelicals see Ted Cruz as their Elijah or John the Baptist to usher in the Millennial Kingdom. However, the fact that Cruz’s supporters are attacking Mrs. Schlafly in such a vile and vicious manner, shows that hell, not heaven, is in their hearts.

I am reminded of the words of King David:

Whether people agree with Schlafly’s decision to endorse Donald Trump is NOT the issue. To target Phyllis as an enemy because of her endorsement is the grossest and most vile attempt at character assassination that I can possibly imagine. Agree with her or not, Phyllis Schlafly is a paragon of integrity.

This leads to a very serious and all-too-common current reality: a sizeable percentage of our so-called “Christian” community is filled with a heart of hatred and war. They like to talk about peace and love, but what they are really about is war and hate.

I can’t keep from saying “I told you so” at this point.

When G.W. Bush and Dick Cheney began their propaganda war against Iraq and Afghanistan, I told my radio audience, “Because G.W. Bush professes to be a Christian, and because he has so much support from within the Christian community, Bush is going to change the definition and character of the word ‘Christian’ in this country forever.” And that is EXACTLY what has happened. And Ted Cruz is picking up right where G.W. Bush left off.

The Christian standard used to be “Blessed are the peacemakers.” Today the standard is “Blessed are the warmongers.” These Bush/Cruz, Israel-First cultists are prepared to not only blow up the entire Arab world, they are prepared to blow up Eagle Forum or any other organization or personality that does not subscribe to their brand of Israel-First obsession. Believe me, if these divisive, hate-filled “Christians” could get away with it, they would be as bloodthirsty and violent as any Muslim terrorist. But since they are unable to behead people such as Phyllis Schlafly or Chuck Baldwin (so far), they set out with all malice to destroy our work and reputations. Yes, I am dealing with many of these same hate-filled “Christians” too.

And I know that many of my brethren will recoil when they hear me say what I’m going to say, but I have analyzed and studied this phenomenon for many years now, and there is a definite common denominator. I’m talking about decades of church splits; pastors being savagely and mercilessly attacked from inside the church; pastors’ families being destroyed by members of their own congregations; and the most bitter, divisive, backstabbing, meddlesome, tale-bearing, discordant, mean-spirited actions and attitudes on the planet.

What is the common denominator? Almost without exception these haters and destroyers are Israel-First, end-time prophecy zealots.

I cannot imagine another presidential candidate’s supporters attacking someone such as Phyllis Schlafly like the Cruz supporters are now doing. It is Ted Cruz’s supporters who are engaging in this attempted destruction of America’s First Lady Of The Pro-Life Movement, Phyllis Schlafly. And again, Ted Cruz is Mr. Christian-Zionist. Cruz is to politics what John Hagee is to religion.

Ted Cruz claims to be pro-life, but he is allowing his supporters to crucify the most influential pro-life American of the last half-century, Phyllis Schlafly.

After over 40 years of labor and leadership in the liberty and Christian movements, and having personally witnessed the massive amount of death and destruction inflicted upon untold thousands of good and honorable men and women at the hands of these calloused and calculating beasts of prey, it is now apparent to me what is behind all of this devastation. It is the same enemy that is trying to destroy Phyllis Schlafly: Israel-First “Christian”-Zionists.

And the thing about it is Phyllis was never “Anti-Israel.” But she wasn’t Israel-First either; she was America-First. For Christian-Zionists, that warrants death. Their loyalty is to the modern Zionist State of Israel, NOT the United States of America. So, Phyllis had to go.

Well, now Phyllis is gone. Her epitaph should read:

P.S. I invite readers to obtain my seven-message series on two DVDs entitled “The Church And Israel.” Titles include:

*The Presentation And Rejection of The King
*“An High Priest For Ever After The Order of Melchisedec”
*Jesus: The Seed of David, The Seed of Abraham
*Christ’s Last Words To Israel
*“Not Of Works”
*“Is He The God Of The Jews Only?”
*“The Children Of Promise”

This series of messages will help people understand why the modern Zionist State of Israel can hold no claim to the promise given to Abraham in Genesis 12:3 and why the “Israel-First” theology of John Hagee, Ted Cruz, and so many others is egregious Biblical error. And readers should also understand that I came to these conclusions after being trained in “Israel-First” theology and believing and preaching it for most of my life. But the longer I preached it, the more dissatisfied I became with it. I knew something wasn’t right. And the more I studied the matter, the more I came to repudiate what I now know is patently false doctrine.