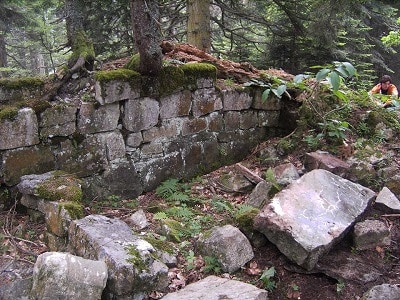 More evidence for the existence of “Nephilim” in ancient times. The writer reports some disturbing findings about the use of human bones at this site. 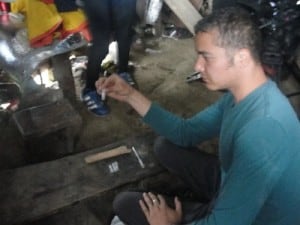 For nine days in early June I was attached to a television production project under the direction of the Discovery Network.

The job in hand was to help create an episode of the Science Channel’s flagship cable show called ‘The Unexplained Files’.

Our episode would be about ancient giant human-like beings.

For anyone unfamiliar with this show, their most popular series of 2013, it as the following mission directive:

The background story was that in 2008 a group of researchers had investigated a burial site high up in the Lesser Caucasus mountain range, specifically within the Borjormi-Kharagauli national park area.

After a shallow dig in an ancient crypt type structure they located a cache of very aged bones.

The bones appeared to be human, yet the size would be consistent with a person of over 2.5 meters in height.

The motivation for their initial expedition was to investigate a local story that a giant burial had been stumbled on by farmers in that area.

Supposedly the farmer had entered a crypt only to find two giant skeletons perched sitting on chairs at a table.

By 2008 the crypt had collapsed and was filled with soil and debris, but bones were been found near the surface of this debris material.

So what did I see of interest on the way?

The answer is, a great deal.

The initial observations were that from about half way we began to encounter worked stone, pieces of a square shaped column, megalithic blocks and smaller clearly shaped building blocks.

Some of these were heaped up into dilapidated walls and others were simply in streams as though washed down from somewhere when the water was much higher and then left dumped in the shallows downstream.

This stone debris was later replaced by what appeared to be a very ancient paved road, in such ruin that it must have been many thousands of years old.

Who could have moved such a massive quantity of material in such an inaccessible area and had the engineering skill to construct kilometers of road.

Most important, why did they do it?

At the top of the mountain, near to where the road ended, there was a ruined building.

Most likely it is a solar temple (as it is East-West aligned) or a fort, the position is up on a narrow ridge making it a great site for a defensive installation.

It is the cellar or crypt attached to this structure that seemingly contains the bones of a large humanoid.

The age of the structure is unknown, but best projections based on the type of cement used would put it at around 1800 to 2200 years old.

It may be much older but no testing has yet been done.

It is a fascinating mystery as to who built this and why, it being so far from any recognizable settlement.

This site needs excavation and detailed forensic archaeological examination, if it is a structure built by an unknown or extinct type of hominid, a giant type, then this could be one of the most important sites in the world for that reason alone.

Testing of bones and other material is underway at the time of this writing but I do not know what the results will tell us if anything.

Most likely this will be announced during the show itself.

Yet all of what I have said pales in comparison to something else up on that mountain, something strange and ominous.

A structure that has been hinted at in Georgian myth and legends under the name of ‘the bone castle’.

In the woods at the very end of the ruined megalithic road, hidden among the trees, was the remains if a concrete construction like no other.

It was not so much the fact it was there or how it looked, but rather what it was made of.

The extremely hard concrete was made of just two ingredients, with no sign of additional mortar.

There was a type of very hard stone, the pieces being just a few inches or so in size, and then bone, in my view human bone.

The bone seemed to make up about 25% of the mixture.

This was horrible and disturbing but not in itself fantastical.

The real discovery was that the bone seemed to have been melted and then hardened again, the bone was itself the mortar for the stone.

In some places it went at impossible right angles with no sign of breaking or shattering.

Somehow the bone had been softened and then compressed with the stone pieces and then hardened again.

There is no known technology that can achieve this.

Yes there is examples of bone used in construction but not of bones being melted into the blocks to serve as the mortar itself!

Though I tend to shy away from the subject of the biblical Nephilim, those giants talked about in the bible as children of fallen angels, I must add that before traveling to this area the well-known Nephilim researcher, L.A. Marzulli had told me that he considered the area to be, “Nephilim Central.”

All I can say is that what I saw there is unlike any site so far identified on Earth.

Let’s hope we get the permits to do a full dig next Summer!