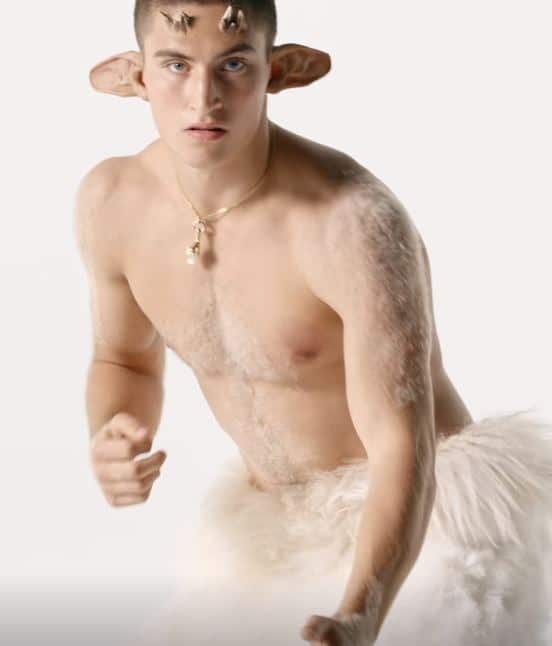 The ad repeats the question “What is love?” answering “I think I know,” the ensuing images promoting the LGBTQxyz… agenda we’ve become all too familiar with. Notice how hypnotic the ad is. It likely has some spells cast over it.

Judging from the comments, it appears that Burberry’s customers (aka people who can afford a $1000 scarf) are completely programmed and blind to the occult Mystery Schools they’re being indoctrinated into. This ad has nothing to do with a clothing line and everything to do with advancing the NWO’s false, sexual, Satanic idea of “love.”

FAUNS/SATYRS: Similar to Pan and depicted as animalistic men with asininely large ears, horns and goat’s legs. Satyrs and fauns are known to be being lascivious, wild, and lustful and are typically shown drinking, dancing or playing flutes. Satyrs and fauns are associated with the gods Dionysus, Hermes, Hephaistos, Pan, Rhea-Kybele and Gaia and are known for their debauchery. (Wikopedia, Theoi, Occultopedia)

“For God so loved the world, that he gave his only Son, that whoever believes in him should not perish but have eternal life. For God did not send his Son into the world to condemn the world, but in order that the world might be saved through him.” Jn 3:16

“But God shows his love for us in that while we were still sinners, Christ died for us. ” Rom 5:8

“And this is love, that we walk according to his commandments; this is the commandment, just as you have heard from the beginning, so that you should walk in it.” 2 John 1: