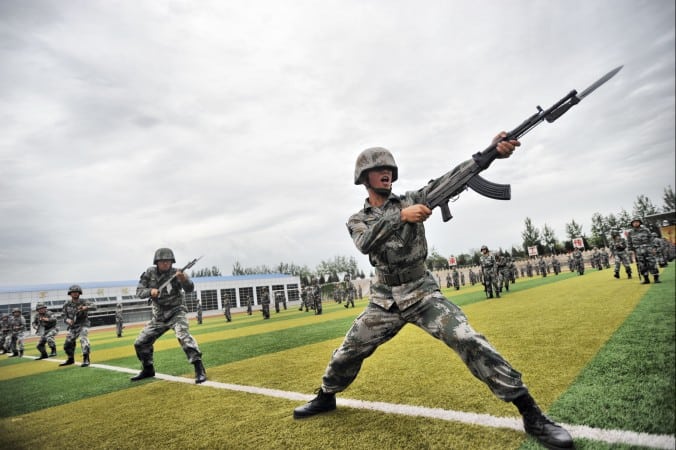 [above – ChinaFotoPress via Getty Images] Soldiers perform military exercises in Beijing on July 22, 2014. Massive military exercises extending from July to September may have been directed at keeping a lid on the domestic political situation, argues Chen Pokong.

An unusual and massive military exercise has been going on in China, and it seems to have had purposes that are more political than military.

“Firepower-2014″ kicked off on July 15, and 10 consecutive live ammunition drills across military regions were launched by the Chinese People’ Liberation Army. In the meantime, the Navy and the Air Force also mobilized to participate in the exercises in the Beibu Gulf, Bohai Sea, Yellow Sea, and East China Sea.

With the participation of the three armed forces and the troops from the six military regions, the exercise was dubbed as an unprecedented “Massive Military Exercise of the Three Armed Forces in Four Seas.”

In terms of the time period, it is also unprecedented, as it started in July and will continue until the end of September. In addition, part of the exercise, such as the drills in the waters of northeast Jiangsu Province, will continue until Nov. 20.

This series of military exercises began during a time of a relative relaxation of tensions in East Asia. Compared to some recent periods, the South China Sea and East China Sea were relatively calm. China’s drilling platform 981 retreated from off Vietnam’s shore. Since last December, the activities conducted by Chinese ships and military planes in the waters off Diaoyu Islands (called Senkaku Islands by Japan) were substantially reduced.

Following the two incidents in which Chinese fighter jets flew “unusually close” to Japanese Self-Defense Force airplanes in May and June this year, the conflict between China and Japan has not escalated.

In late July, China invited Yasuo Fukuda, former Japanese prime minister and former president of the Liberal Democratic Party, to secretly visit China. Fukuda also met with Chinese Communist Party (CCP) head Xi Jinping to discuss how to improve Sino-Japanese relations, aiming to achieve the goal of holding a summit attended by the heads of China and Japan. (It is expected that they can meet as early as November this year when the APEC summit is held in Beijing.)

On July 29, during the large-scale military exercises, the Xi Jinping regime unexpectedly made public the long-pending case against Zhou Yongkang, the former domestic security czar and diehard loyalist to former CCP head Jiang Zemin. After obtaining relatively safe reactions from society, the well-wrought, ruthless exposure and denunciation of Zhou Yongkang were then published on Chinese mass media one after another.

On July 30, the day after the Zhou Yongkang case was announced, the Central Commission for Discipline Inspection sent a high-profile inspection team to station in Shanghai until the end of September.

On Aug. 11, the chairman of the Shanghai Bright Food Group, Wang Zongnan, was arrested. The Group’s predecessor was the Shanghai Yimin Food Factory, and Jiang Zemin was the first deputy director of the factory.

In 2006, the Shanghai Yimin Food Factory, Shanghai NGS Group, Shanghai Sugar, Cigarette & Wine Group, and the Jinjiang International Group were merged into Shanghai Bright Food Group. Wang Zongnan served as chairman and Party secretary of the group. He declared that Jiang Zemin was the one who created the Bright Food brand.

Now that the businessman Wang Zongnan has been investigated, who will be targeted next? The answer seems to be self-evident.

The “Massive Military Exercise of Three Armed Forces in Four Seas” is more like a struggle against domestic enemies. Those domestic enemies are by no means the Muslim Uyghurs. Despite the fact that tension between Uyghurs and the Chinese authorities has escalated recently, there’s no need to launch such a massive national military mobilization.

In other words, the military exercise, while on the surface aiming at foreign enemies, in fact aims at domestic enemies. The large-scale military exercise was launched to prevent the revolt of domestic forces. With support from the high-profile inspection team from the Central Commission for Discipline Inspection of the CCP and the three armed forces, Xi Jinping is planning to do something extraordinary.

During the massive military exercise, commentaries marking the 120th anniversary of the Sino-Japanese War reached a climax. Among them, some are exaggerated. For example, the Global Times reported that if a Sino-Japanese war occurred again and Japan defeated China, there might be a Beijing massacre.

According to the Global Times, the international community would then happily say Japan’s victory was a “victory of democracy over tyranny” and another “progress of human civilization.”

The heated commentaries marking the 120th anniversary of Sino-Japanese War have served like a smokescreen for the Chinese public covering up some of the actions launched by Xi Jinping’s camp.

In July, many domestic flights were cancelled with no advance notice or very short notice, and the authorities initially said the cancellations were due to military exercises. Later, the excuse changed to weather conditions. The inconsistency indicated that someone was hiding something.

The majority of the cancelled flights were on the route between Beijing and Shanghai. Beijing is the capital of China, and Shanghai is China’s largest city. The large number of cancellations on several occasions caused significant losses, both economically and socially.

Excuses such as weather conditions and military exercises are not justifiable. People cannot help but wonder what the real reasons were.

Considering the current political environment in China, Beijing and Shanghai are the two centers of the two opposite political forces in China. The former is the group in power headed by Xi Jinping, which represents some legitimacy and legality. The latter, nicknamed the “Shanghai Gang,” is headed by Jiang Zemin. Jiang’s gang has been criticized as practicing the “Old Man Politics” that is haunting China.

Soon after the coup planned by Bo Xilai and Xu Caihou was discovered in February 2012, Zhou Yongkang was reported to be under control. But the formal investigation of Zhou’s case was only announced July 29, which ended long speculation about how he would be dealt with.

It is reasonable to deduce the delay was caused by obstruction from the “old man.” Now, Xi had to announce the arrest of Zhou Yongkang to consolidate his camp, while the “old man,” worrying Zhou’s fall would be the prelude to his end, exerted force to block it. Now, it is time for a face-off.

In addition to the cancelled flights, in July, subway security measures in Beijing were stepped up on the pretext of increased travel during the summer season. The measures are so strict that all trash bins must be cleared every 15 minutes.

People wondered if the cancellation of flights and the subway security were pre-emptive moves meant to stop the fast mobilization of people intent on launching a terrorist attack.

This series of events suggests China may have experienced some form of coup involving Beijing and Shanghai. It could have been a failed attempt to overthrow Xi that has been put down or a move from Xi’s camp to get rid of Jiang’s political force.

Xi’s move might be faster than people expected, but these moves may not have been his original intention. Circumstances may have pushed him to move faster, or someone may have forced him to do so. Xi Jinping and Wang Qishan should know well that in a power struggle, pre-emptive moves have advantages. It can be expected that more exciting plays are coming up for Chinese politics.

Chen Pokong was a member of the 1989 student movement in China. After twice serving time in prison, Chen was exiled to the United States. He writes regularly on, and is the author of several books about, China and its politics.