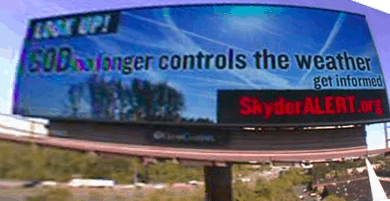 If these don’t get people to look up and think twice about what’s going on overhead, I don’t know what will.

“Look up! God no longer controls the weather” controversial billboards launched in Atlanta

NEW YORK, NY – The fight against Climate Engineering (a/k/a GeoEngineering) takes to Clear Channel billboards in Atlanta this week as other cities around the country begin to follow suit to raise awareness about the earth’s largest environmental threat.  “Look Up! God No Longer Controls the Weather.  Get Informed.  www.skyderalert.org ” Unregulated, the health risks of Climate Engineering are unknown and environmental risks are becoming more evident each day.

Award-winning filmmaker George Barnes stumbled across Climate Engineering by accident while testing time-lapse camera and went on to direct “Look Up!” a multi-award winning documentary film, narrated by William Baldwin.  With the help of philanthropic donations to SKYDER, a non-profit 501(c)4 dedicated to increasing public awareness about the dangers of unregulated geoengineering, and petitioning lawmakers for change,

Scientists have argued that GeoEngineering’s inclusion in a recent report by the Intergovernmental Panel on Climate Change gives it legitimacy. Other scientists, along with most policy makers and activists like Al Gore, believe the risks of something going wrong far outweigh any potential benefits.