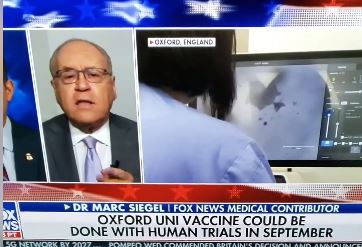 Many Fish – Link to article referred to in video: https://www.timesofisrael.com/us-biotech-firm-inovio-reports-encouraging-virus-vaccine-results/

In this video, American Journalist Mark Segal announced on Fox News that the new vaccine WILL have CHIP embedded in it. BTW, if you go to YouTube to see this video from 7/15, they edited this segment out right after broadcast. This was recorded on a phone by someone by rewinding the dvr a minute. Its gone now.

And in this video, Dr. Carrie Madej comes out with some startling facts about vaccines, especially this proposed new one.

Keep in mind the importance of PERCEPTIONS. It looks like the vaccinations are coming, but what’s more important to them is that we BELIEVE they are coming. Keeping us in a state of fear (the opposite of faith) and feeling helpless as we focus on the NATURAL rather than on who we are, whose we are, and where true life is found.

And he causeth all, both small and great, rich and poor, free and bond, to receive a mark in their right hand, or in their foreheads:
And that no man might buy or sell, save he that had the mark, or the name of the beast, or the number of his name. (Rev 13:16-17)

The “mark” is symbolic of ownership and servitude. God commanded the Israelites to wear God’s Words on their hearts, tying them to their hands and forehead (Deuteronomy 6:8)

“The terminology “A mark in your forehead” symbolically means “to serve.” And so it is to this very day; a Uniform’s cap has an engraved metallic mark etched at the forehead.

The terminology “In your right hand” symbolizes “Oaths” (Genesis 14:22, Ezekiel 17:18, Ezekiel 36:7 and Daniel 12:7). And so it is to this very day; an Oath is performed with your right hand raised. Look up “Oath” in any Encyclopedia: An Oath is always a religious ritual. Your Bible prohibits taking an Oath to a pagan state god. A perjury Oath on a government Form is a religious ritual. (Your government continues to conduct their religious rituals, because they cannot have separation of their church from their state). “Foreheads” and “hands,” when mentioned together, signify “loyalty and obedience.” It is as simple as today’s idiom “right hand man.” source

Prophecy is spiritual, yet the veil is being thinned, if the devil hasn’t been altogether “loosed”, and the hierarchy of evil is being “externalized”, physically manifesting in the natural world.

For the mystery of lawlessness is already at work. Only he who now restrains it will do so until he is out of the way. And then the lawless one will be revealed, whom the Lord Jesus will kill with the breath of his mouth and bring to nothing by the appearance of his coming. The coming of the lawless one is by the activity of Satan with all power and false signs and wonders, and with all wicked deception for those who are perishing, because they refused to love the truth and so be saved. Therefore God sends them a strong delusion, so that they may believe what is false, in order that all may be condemned who did not believe the truth but had pleasure in unrighteousness.

We ought always to give thanks to God for you, brothers beloved by the Lord, because God chose you as the firstfruits to be saved, through sanctification by the Spirit and belief in the truth. To this he called you through our gospel, so that you may obtain the glory of our Lord Jesus Christ. So then, brothers, stand firm and hold to the traditions that you were taught by us, either by our spoken word or by our letter. (1 Thess 7-15)

If these vaccines truly have the power to stop free will, and I’m still not convinced they will, but if they do, we have to trust that our Father, knowing the end and the beginning of all things, knows who will turn to Him. What I think is more likely is that these vaccines will be deadly and that countless people will die horrible deaths as a result of this DNA manipulation.

“So the first angel went and poured out his bowl on the earth, and harmful and painful sores came upon the people who bore the mark of the beast and worshiped its image.” (Rev 16:2)

I do think that, if this vaccine is mandated, we will have to refuse it, even if it means, jobs, travelling, food, water, shelter, clothing. As unthinkable as all of it is; brothers and sisters, it looks like we are there, or at the very least, right at the door.