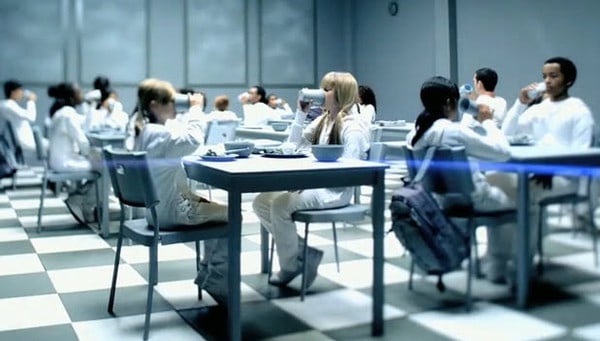 “In searching for a new enemy to unite us, we came up with the idea that pollution, the threat of global warming, water shortages, famine and the like would fit the bill…. All these dangers are caused by human intervention… The real enemy, then, is humanity itself.1 Club of Rome (an influential group of globalist leaders)

In the weeks surrounding Earth Day (April 22, Lenin’s birthday), students from coast to coast celebrate their spiritual connection to Mother Earth, chant prayers to the Great Spirit, and imagine politically correct answers to the unequal distribution of the world’s resources. Using computers that “simulate the real world,” they recreate environmental disasters and “solve” global problems.

These dubious lessons share a common aim-. to persuade students to reject Western culture and become advocates for new global beliefs and values While this agenda makes little sense to those who view America from a traditional perspective, it makes perfect sense to leaders seeking global laws that would govern land, people, education, and consumption.

A lesson in Clean Sweep, an environmental curriculum published by the Iowa Department of Education, illustrates the bias behind environmental education. The class divides into two groups: first, the world’s current population seated in a circle representing the earth; second, the “unborn” people of the world. Played like musical chairs, the game instructs the first group to gather natural resources whenever the music stops.

Meanwhile, new children are “born”, adding to the fast-growing “population” consuming the dwindling resources. Guess what happens. The world runs out of resources.

Like most environmental classroom exercises, the game sounds logical but distorts reality. Designed to change attitudes, it ignores scientific facts, social statistics, and renewable resources.2 Yet, what it does is far more dangerous than what it omits: it gives children an alarming view of an imagined reality. They feel the exaggerated dangers. They agree to solve the problem.

To make sure the children understand that America is the villain of the world, they discuss the main message: “The U.S.A. uses over 20% of the world’s resources. . . How do the others feel toward the U.S.A. in this game?” Other questions prod the children toward these “right” conclusions: America’s demand for resources deprives poorer nations of their equal share. Greedy nations must reduce consumption, block population growth, and make whatever sacrifices needed for common good and planetary healing.
Genuine concern for the environment is needful, for ecological abuses do destroy farm land, sea life, forests, and other resources-especially outside the Western word. But since most environmental problems are local or regional, they fail to serve the political purposes of global leaders who want nothing less than global governance.

“In searching for a new enemy to unite us, we came up with the idea that pollution, the threat of global warming, water shortages, famine and the like would fit the bill,” declared members of the Club of Rome in a sweeping 1991 report on global governance.” All these dangers are caused by human intervention…. The real enemy, then, is humanity itself.” 4

Al Gore, who wrote a book to spread a similar message, said, “We must make rescue of the environment the central organizing principle for civilization.”5 In Earth in the Balance, he calls for a “worldwide education program” and a “panreligious perspective” based on “the wisdom distilled by all faiths.”6

Gore knows that common beliefs and values based on idealized (not factual) models of earth-centered cultures are vital to planetary oneness. Just as tribes, not individuals, owned the land and shared common values, so government must control land, populations, and beliefs in the next decade. A mythical “common good” must inspire the new policies.7

“We’d like to see the world a better place… to get some broad-based support, to capture the public’s imagination,” said Stanford University environmentalist Stephen Schneider. “That, of course, entails getting loads of media coverage. So we have to offer up scary scenarios, make simplified, dramatic statements and make little mention of any doubts we might have… Each of us has to decide what the right balance is between being effective and being honest.”8 (Emphasis added)

In other words, facts must yield to ideology. Excluded from public debate are uncompromising scientists like Dr. Frederick Seitz, past President of the National Academy of Sciences and recipient of the National Medal of Science, who refuses to conform to the government agenda.

“There is reason,” writes Dr. Seitz, “based on sound scientific work, to express doubt that we are in immediate danger from either global warming or depletion of the ozone layer as envisaged by some extreme activists in the environmental movement.”9

Yet, environmental curricula and children’s ecology books echo those scary scenarios envisioned by the “extreme activists.” Many blame parents for exaggerated global problems. “They may deny it,” says Captain Eco, the high flying superhero of a large picture book called Captain Eco and the Fate of the Earth, “but … they’re stealing your future from under your noses.”10

Captain Eco takes two children on a tour of the damaged earth. After showing them all the familiar abuses in the worst possible light, the captain points them to the final mega-problem: “and that’s YOU.”

“We’re not that bad, are we?” they respond.
“Not you personally, but the whole human race. There are so many of you…. Either you go on… polluting all over the planet… Or you can work toward a better world…. Will you help me?”11

Lots of children are willing. They plant trees and clean river banks–which is great! They join Kids for Saving the Earth, Kids for a Clean Environment, Kids’ in Nature’s Defense, and the K-12 Network save the planet. They become vegetarians, peace activists, and Enviro-Cops who receive badges and recite oaths to protect the earth. They write letters by the thousands–to the White House, to Congress, to local newspapers. . . .

Spurred by activist teachers, students join worldwide environmental networks through global computer links, which can tap into advocacy groups like PeaceNet and EcoNet. Nearly 300 schools in 21 countries are linked through the International Education and Resource Network (I*LEARN) which was formed in 1991 when the Copen Foundation expanded its New York/Moscow project. Few children are equipped to recognize the indoctrination. In order to resist classroom pressures to embrace environmental globalism, children need to….

* Know science facts that expose false scenarios yet show practical solutions genuine problems. For scientific data, read The True State of the Planet: Ten of the World’s Premier Environmental Researchers in a Major Challenge to the Environmental Movement, edited by Ronald Bailey.
* Understand some of the political visions which fuel the environmental movement.
* Remember that classroom computer programs and models don’t simulate the real world. At best they match environmental ideology. The programmers decide what the computers will demonstrate.

To avoid compromise with mythical thinking and earth-centered environmentalism, children should watch out for songs, rituals, and myths that encourage pantheism and earth worship.

When God put humans in charge of his creation, He intended that we love and care for it as He would, not abuse it. (Genesis 1: 26, 28, 2:15). To do our part, we need to heed the Maker-not earthy spirits. By His life in us, we can share His concerns and follow His caring ways before the watchful eyes of the world.

1 Alexander King & Bertrand Schneider, The First Global Revolution (New York: Pantheon Books, 1991), 115.
2 For example, trees are a renewable resource. The fact that the USA plants more trees than it cuts down is rarely, if ever, mentioned in environmental curricula.
3 Actually the ozone “hole” is not a hole at all. It is a seasonal thinning discovered back in 1956 by Dr. Gordon Dobson. Each spring, after the long sunless southern winter, the ozone layer thins over the Antarctica. Conversely, it always expands after the southern summer when ultraviolet radiation once again creates ozone. (The media didn’t tell you that the “hole” closes each year, did it?) The annual thinning varies from year to year. In fact, less ozone was measured in 1985 than in 1990 though more freon was used. Why? Scientific data indicate a strong consistent correlation between ozone depletion and major volcanic explosions and other natural factors.
4 Alexander King & Bertrand Schneider, The First Global Revolution (New York: Pantheon Books, 1991), 115.
5 Steven Chapman, Chicago Tribune, October 8, 1992.
6 Al Gore, “Earth in the Balance (Houghton Mifflin, 1992), 355, 258-9.
7 Globalists would like the California Social Studies Framework. Twisting the old meaning of “literacy,” it requires students to demonstrate “Cultural Literacy” (understand “the mytholigy, legends, values, and beliefs” of the world’s cultures), “Economic Literacy” (“understand…the problem of scarcity” and how to determine “what, how, and for whom to produce” within a planned economy), and “Geographic Literacy” (“Understand world regions” and how people are “changing the land”). History-Social Science Framework (Sacramento: The California Department of Education, 1988), 14-17.
8 Jonathan Schell, “Our Fragile Earth,” Discover (October 1989); 44.
9 Dr. Frederick Seitz, Global Warming and Ozone Hole Controversies: A Challenge to Scientific Judgment (Washington, DC: George C. Marshall Institute, 1994), 25, 27, 33.
10 Jonathan Porritt, Captain Eco and the Fate of the Earth (New York: Dorling Kindersley, Inc., 1988), 5.
11 Ibid., 46-47.