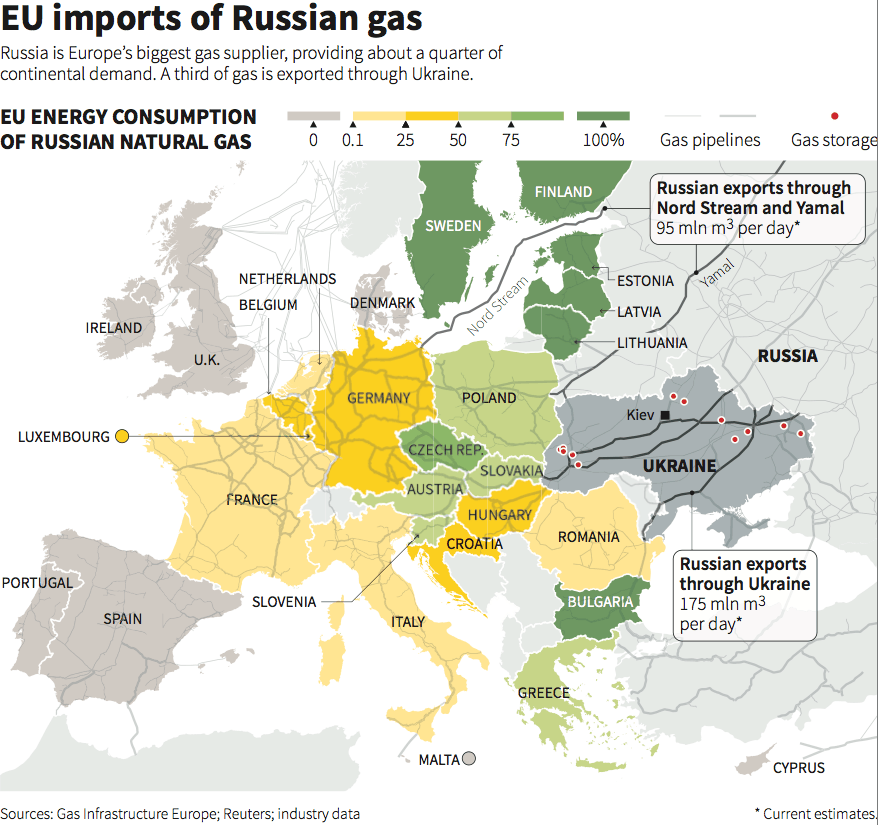 Speaking at the Prophecy Forum last weekend, Gary Winkelman presented the real picture behind Russia’s interest in the Ukraine, Syria and Iran. In a word; pipelines, gas pipelines which amount to vast amounts of money, and which are vulnerable to attack. Oil is moved by tanker, hence the interest in the Crimean port, where Russia has one of it’s largest submarine bases.

Winkelman referred to Ezekiel 38:4, proposing that the “hook” in the text may be oil:

“And I will turn thee back, and put hooks into thy jaws, and I will bring thee forth, and all thine army, horses and horsemen, all of them clothed with all sorts of armour, even a great company with bucklers and shields, all of them handling swords” Ezekiel 38:4 KJV

Pipelines bottleneck through the Ukraine. 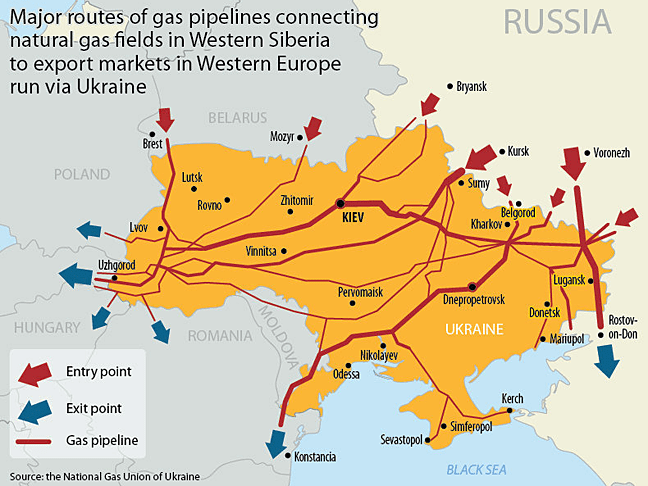 Why did NATO keep quiet as mass genocide occurred in Georgia?

“As Russia’s president or prime minister, Putin dispatched Russian armed forces against the peoples of Chechnya, Georgia, and Ukraine while keeping them in a province of Moldova. His troops killed between 100,000 and 200,000 Chechens, split off South Ossetia and Abkhazia from Georgia, and watched as South Ossetians carried out ethnic cleansing of Georgian villages…” Walter Clemens – World Affair Journal  read more

Who had the most to gain? “Follow the money”, said Winkelman. “They don’t want their oil shut off.” 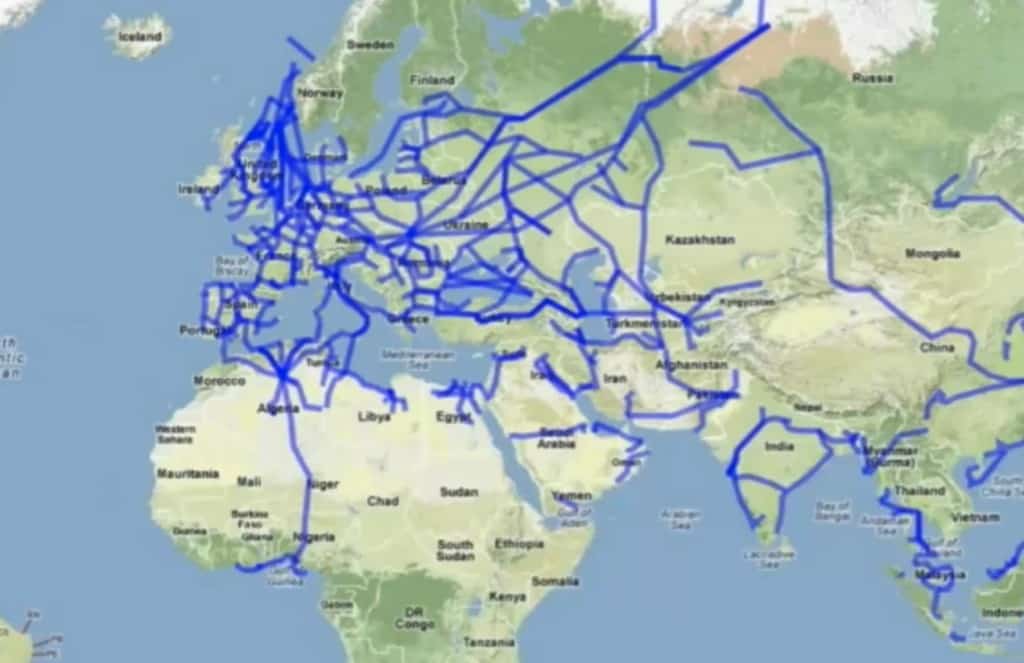 For more on Gary Winkelman’s presentation and the other noted speakers at The Prophecy Forum, watch for the DVD’s of the event, to be released within a month or two. http://www.theprophecyforum.com/

More recently in the news about Russia:

Russia to increase ‘patrols’ over Gulf of Mexico with nuclear-capable bombers in latest saber rattling amid tensions over Ukraine, Syria and Iran

By AP REPORTER and JOSH GARDNER FOR MAILONLINE

Russia’s long-range bombers will range from the Arctic Ocean to the Caribbean and the Gulf of Mexico on regular patrol missions, the military said Wednesday, a show of muscle reflecting tensions with the West over Ukraine.

A statement from Defense Minister Sergei Shoigu’s statement comes as NATO has reported a spike in Russian military flights over the Black, Baltic and North seas as well as the Atlantic Ocean.

It reflects Moscow’s increasingly tough posture amid tensions with the West over Ukraine and its role in the conflict in Syria.

Shoigu said Russian long-range bombers will conduct flights along Russian borders and over the Arctic Ocean. He added that ‘in the current situation we have to maintain military presence in the western Atlantic and eastern Pacific, as well as the Caribbean and the Gulf of Mexico.’ 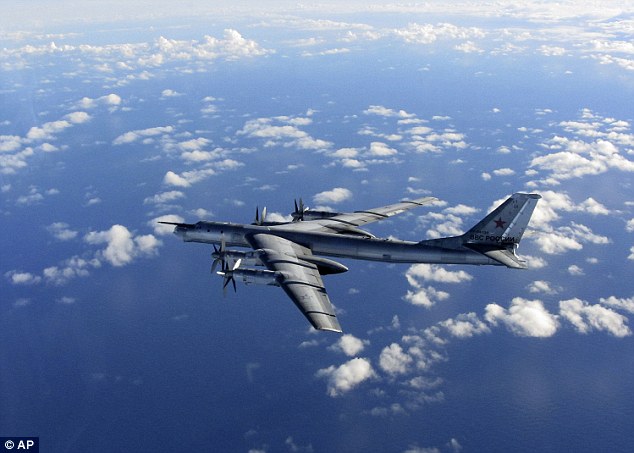 He said that the increasing pace and duration of flights would require stronger maintenance efforts.

Russian nuclear-capable strategic bombers were making regular patrols across the Atlantic and the Pacific Oceans during the Cold War, but the post-Soviet money crunch forced the military to cut back.

Col. Steve Warren, a Pentagon spokesman, declined to call this a Russian provocation. He said the Russians have a right, like any other nation, to operate in international airspace and in international waters. 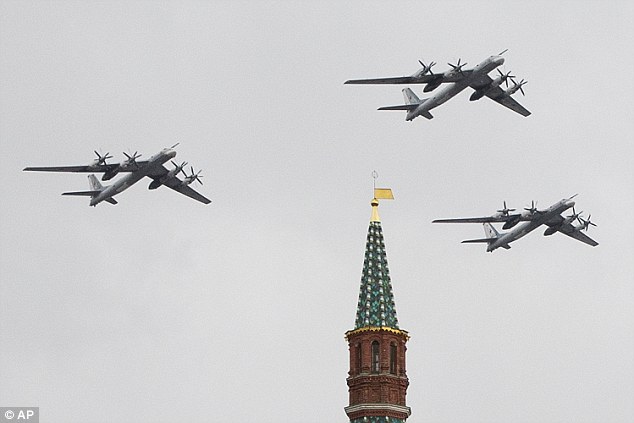 Gearing up? Sergei Shoigu’s statement comes as NATO has reported a spike in Russian military flights over the Black, Baltic and North seas as well as the Atlantic Ocean. It reflects Moscow’s increasingly tough posture amid tensions with the West over Ukraine. Here, Russian Air Force strategic bombers, Tu-95, fly in formation over Red Square

The important thing, Warren said, is for such exercises to be carried out safely and in accordance with international standards.

Ian Kearns, director of the European Leadership Network, a London-based think tank, said the bomber patrols are part of Kremlin’s efforts to make the Russian military ‘more visible and more assertive in its actions’.

In the current situation we have to maintain military presence in the western Atlantic and eastern Pacific, as well as the Caribbean and the Gulf of Mexico
Russian Defense Minister Shoigu

The new bomber flights ‘aren’t necessarily presaging a threat,’ Kearns said. “They are just part of a general ramping-up of activities.”

But, he added, ‘The more instances you have of NATO and Russian forces coming close together, the more chance there is of having something bad happening, even if it’s not intentional.’

The bomber patrol flights have resumed under Putin’s rule and have become increasingly frequent in recent years.

Three of the nearly 40 incidents, the think tank said, carried a ‘high probability’ of causing casualties or triggering a direct military confrontation: a narrowly avoided collision between a civilian airliner and a Russian surveillance plane, the abduction of an Estonian intelligence officer, and a large-scale  Swedish hunt for a suspected Russian submarine that yielded no result.

In September, the report said, Russian strategic bombers in the Labrador Sea off Canada practiced cruise missile strikes on the U.S. Earlier this year, in May,

the report said, Russian military aircraft approached within 50 miles (80 kilometers) of the California coast, the closest such Russian military flight reported since the end of the Cold War.

Just Tuesday, the White House said Obama and Putin spoke three times on the sidelines of an Asia-Pacific economic meeting, tackling some of the tough issues that have strained their relationship, including Russia’s provocations in Ukraine and support for Syria’s embattled government. They also discussed the fast-approaching deadline in nuclear talks with Iran, in which the U.S. and Russia find themselves on the same negotiating team.

Unlike at some of their past meetings, Obama and Putin kept their deep-seated policy disagreements behind the scenes. But their public encounters suggested their relationship remains tense.

Picturesque Yanqi Lake, just outside of Beijing, became the venue for an awkward pas de deux between two of the most powerful leaders in the world. Entering an ornate, wood-paneled room for the start of the summit, Obama and Putin looked a bit like sidekicks to Chinese President Xi Jinping. The summit’s host led the way, with the American on one side and the Russian on the other. 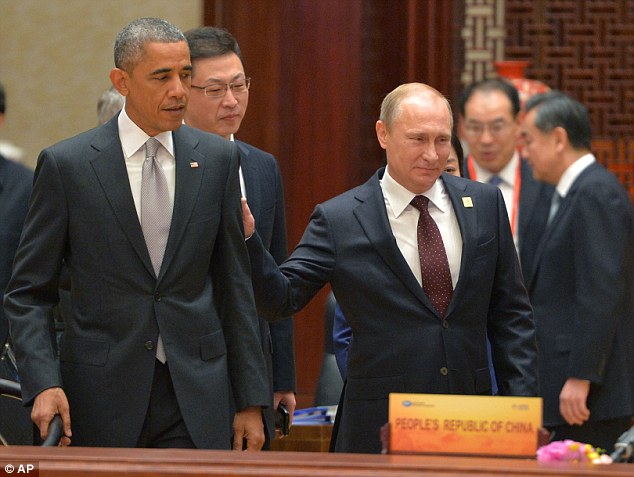 Trouble in China? Russian President Vladimir Putin passes by US President Barack Obama at the Asia-Pacific Economic Cooperation (APEC) Summit on Tuesday where pleasantries in front of the camera reportedly hid the icy negotiations behind it over the thorny issues of Syria, Iran and Ukraine 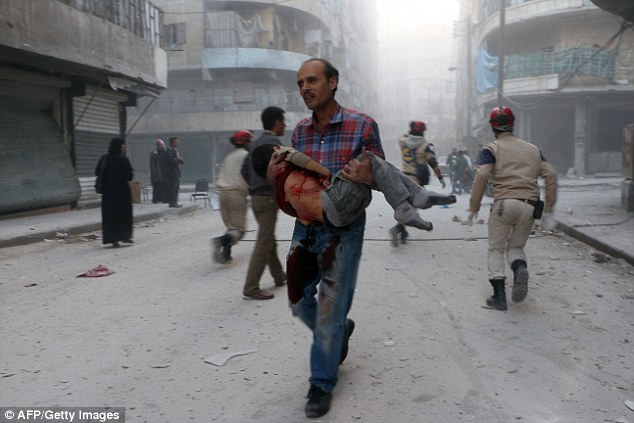 Syrian strife: Syria asked Russia this month to speed up delivery of S-300 anti-aircraft missiles, concerned about a possible US attack, Syrian Foreign Minister Walid Muallem said in an interview published Thursday. Here, a man carries the body of his son following a reported barrel bomb attack by government forces in the northern Syrian city of Aleppo