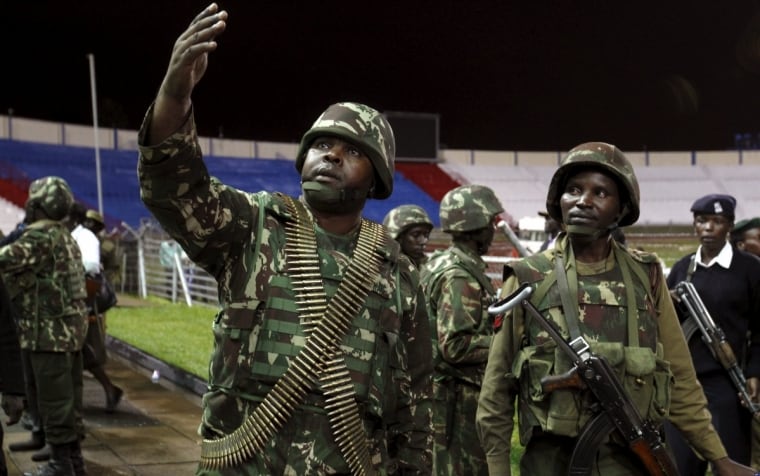 The Kenyan government apparently knew about the attack 7 hours before it occurred but delayed in flying soldiers out to the scene. Why the delay?

It has emerged that the authorities learned of the attack before dawn. But it was seven hours before police commandos trained to deal with such a situation flew to the scene.

“They died. It was preventable but all we are saying in Kenya is that corruption killed them because if there was not corruption in this country that would have been prevented,” said human rights activist and vigil organiser Boniface Mwangi.

We know that the CIA has funded Al Queda, ISIS and even Al Shabab in the past. How can we not conclude that these attacks are all part of a plan to orchestrate chaos that will lead to justifying a police state and global governance?

Gunmen from the al Qaeda-aligned group killed 148 people on Thursday when they stormed the Garissa University College campus, some 200 km (120 miles) from the Somali border.

Jets pounded the camps in Gondodowe and Ismail, both in the Gedo region bordering Kenya, the military source said on Monday. Cloud cover made it difficult to establish how much damage the bombings caused or estimate the death toll.

“We targeted the two areas because according to information we have, those (al Shabaab) fellows are coming from there to attack Kenya,” he said.

Kenya has struggled to stop the flow of al Shabaab militants and weapons across its porous 700km border with Somalia.

Al Shabaab militants have killed more than 400 people in Kenya since April 2013.

An African Union peacekeeping force that includes Kenyan troops, and which is fighting the group in Somalia, carried out arrests and seized ammunitions in an al Shabaab camp in Gondodowe last August.

Once again, President Barack Obama has released a statement denouncing a mass terror attack on persecuted Christians, without mentioning the fact that they were killed for their faith.

When 21 Coptic Christians were beheaded by ISIS in February, the president’s statement condemning their deaths did not mention they were killed for their faith. Later, White House Press Secretary Josh Earnest said he “[couldn’t] account for” the omission.

When nearly 150 students at a Kenyan university were massacred on Friday, the Islamist terrorists affiliated with al-Shabaab separated the Christians from the Muslims, killing only the Christians. But in Obama’s statement condemning the slaughter, once again there was no mention of the fact that the students were killed for their faith:

Michelle and I join the American people in expressing our horror and sadness at the reports coming out of Garissa, Kenya. Words cannot adequately condemn the terrorist atrocities that took place at Garissa University College, where innocent men and women were brazenly and brutally massacred.  We join the world in mourning them, many of whom were students pursuing an education in the pursuit of a better life for themselves and their loved ones. They represented a brighter future for a region that has seen too much violence for far too long. We also commend the heroism of the responders who lost their lives in the selfless protection of the students and faculty.

I know firsthand the extraordinary resilience and fundamental decency of the people of Kenya. So I know that the people of Garissa and all of Kenya will grieve, but their determination to achieve a better and more secure future will not be deterred. And neither will the resolve of the United States. We will stand hand-in-hand with the Kenyan Government and people against the scourge of terrorism and in their efforts to bring communities together. This much is clear: the future of Kenya will not be defined by violence and terror; it will be shaped by young people like those at Garissa University College – by their talents, their hopes, and their achievements. This is a message I will relay to the Kenyan people when I visit Kenya in July. Even at this difficult hour, the Kenyan people should know they have an unwavering friend and ally in the United States of America.

Got it? – Terrorists are Bad. Governments are corrupt but we need military power to keep us safe.  and….Oh, and there is no persecution against Christians. (Nothing to see here folks – move on.)

Some voices on Global Governance

“… a world of irresponsible, competing and unrestrained national sovereignties, whether acting alone or in alliance or in coalition, is a world of international anarchy. It must make place for a higher and more inclusive authority.” John Foster Dulles – CFR

“There is no indication that American public opinion, for example, would approve the establishment of a super state, or permit American membership in it. in other words, time – a long time – will be needed before world government is politically feasible…This time element might seemingly be shortened so far as American opinion is concerned by an active propaganda campaign in this country…” Allen W. Dulles (CFR) and Beatrice Pitney Lamb, Foreign Policy Association, 1946