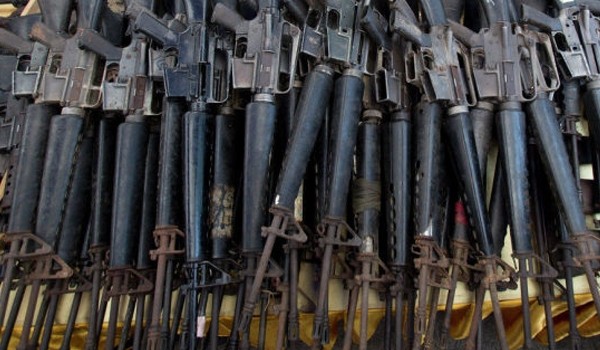 If you haven’t already figured it out, the entire “war on terror”, and “terrorism” itself are frauds… The entire charade is designed to create fear in people so they will support their government stripping them of their personal freedoms for the illusion of security, and gain blind support of their governments’ war against innocent nations, under the guise of “fighting terrorism”.  Don’t be duped!

Here’s an article that reveals the truth.  Coming from the Farsnews website at www.english.farsnews.com. Here the so called “terrorist” groups are exposed as a fraud and armed by the Israelis….

Israeli-Made Weapons Seized by Hezbollah in Zabadani
TEHRAN (FNA)- A large cache of Israeli-made weapons was seized in Zabadani region during the mop-up operations by the Lebanese Hezbollah Resistance Movement.
After 10 days of the Syrian army and Hezbollah troops’ massive operations to cleanse different districts in Southwestern Zabadani region, efforts still continue to discover the terrorists’ linking tunnels and hideouts.
Only on Monday morning, Hezbollah forces could purge the terrorists from nearly 15 residential blocks in the Eastern part of al-Jasr mosque.
Also they arrested three members of Ahrar al-Sham terrorist group during their house to house searching in Zabadani.
Hezbollah forces also discovered and seized a large cache of Israeli-made weapons and military equipment in areas near al-Rahmah mosque in the Central parts of Zabadani.
The Syrian army and popular forces retook the city of Zabadani from terrorists on September 1.
The Lebanese Hezbollah resistance forces almost completed their mop-up operations in the city of Zabadani that was seized back from the terrorists last Wednesday.
“The resistance forces have purged terrorists from Zabadani in a two-day operation,” an informed source told FNA.
The source reiterated that the terrorists had dug tunnels underneath the buildings in Zabadani to get to other parts of the city.
Then on Thursday, Israel attacked a position of the Syrian Army in Zabadani that was used by government and Hezbollah’s joint troops to pound terrorists, according to a military source.
The Israeli Air Force has carried out airstrikes against an artillery position of the Syrian Army near the town of Zabadani, around 45 km (28 miles) from Syria’s capital Damascus, a military source told Sputnik on Thursday.
“Israeli Air Force planes carried out airstrikes at an artillery position belonging to the Syrian Army,” the source said. “The artillery was used by the army to repel attacks from militants in the eastern part of Zabadani.”
The source added that terrorists attacked Syrian army positions on the east side of Zabadani in the early hours of Thursday. The Syrian military, supported by the artillery shelling, managed to repel the attack after a three-hour battle.
After the Israeli Air Force carried out the airstrike, militants reportedly launched a second assault attempt, also repelled by the government’s forces, according to the source.

The Bashar al-Assad government forces and their Hezbollah allies are nothing more than paid mercenaries, criminals, and/or CIA/Mossad agents working for the conquest and destruction of Syria itself… (NTS)

Once again “terrorists” are caught,  armed with American and Israeli made weapons and in most cases the “terrorists” turn out to be either CIA or Mossad agents.

The Russians, (invited by Syria as an ally), are committing troops to Syria. These troops will soon be in the field fighting against “ISIS” and other “terrorist” groups. How long will it be before these “terrorists” are captured and exposed to the public as CIA and/or Mossad agents? All part of the elite’s deliberate plan to expose the “Illuminati” as “evil”, and bring in the “good” (remember the ‘pillars‘) “ascension”, “consciousness”, “convergence”, Extra Terrestrial(?) “enlightenment”… and all the other buzz words for the New Age movement and preparation for a spiritual world leader/false Christ. Don’t be deceived! Keep your eyes on Jesus and fear no evil!

“fixing our eyes on Jesus, the author and perfecter of faith, who for the joy set before Him endured the cross, despising the shame, and has sat down at the right hand of the throne of God.” Hebrews 12:2