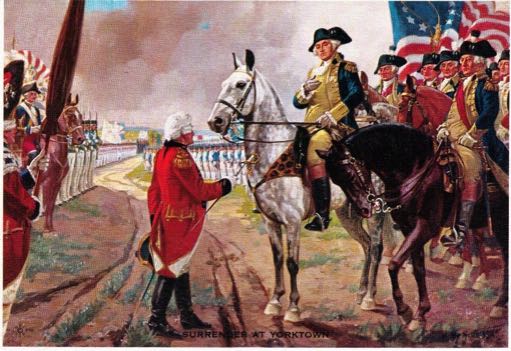 A year before his death, Sen. Joseph McCarthy made the connection between Freemasonry, Communism, and Judaism. He cited British General Charles Cornwallis 1781 prophecy of the Masonic (Communist) takeover of America.
“Cornwallis well knew that his military defeat was only the beginning of world catastrophe that would be universal and that unrest would continue until mind control could be accomplished through a false religion. What he predicted has come to pass. A brief sketch of American religious history and we have seen Masonry infused into every church in America with their veiled Phallic religion.”

“Your Churches Will Teach the Jew’s Religion”

And many of the people of the land became Jews.” Esther 9:17.

“The confession of General Cornwallis to General Washington at Yorktown (Oct. 17, 1781) has been well hidden by historians. History books and text books have taught for years that when Cornwallis surrendered his army to General Washington that American independence came, and we lived happily ever after until the tribulations of the twentieth century.”

“Jonathan Williams recorded in his “LEGIONS OF SATAN,” 1781, that Cornwallis revealed to Washington that “a holy war will now begin on America, and when it is ended America will be supposedly the citadel of freedom, but her millions will unknowingly be loyal subjects to the Crown.”

Cornwallis went on to explain what would seem a contradiction:

“Your churches will be used to teach the Jew’s religion and in less than two hundred years the whole nation will be working for divine world government. That government that they believe to be divine will be the British Empire. All religions will be permeated with Judaism without even being noticed by the masses, and they will all be under the invisible all-seeing eye of the Grand Architect of Freemasonry.” 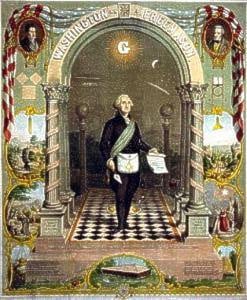 And indeed George Washington himself was a Mason, and he gave back through a false religion what he had won with his army.

“Cornwallis well knew that his military defeat was only the beginning of world catastrophe that would be universal and that unrest would continue until mind control could be accomplished through a false religion. What he predicted has come to pass. A brief sketch of American religious history and we have seen Masonry infused into every church in America with their veiled Phallic religion.

“Darby and the Plymouth Brethren brought a Jewish Christianity to America. Masons Rutherford and Russell started Jehovah Witnesses’ Judaism which is now worldwide with their message of the divine kingdom. Mason Joseph Smith started Mormon Judaism with its Jewish teaching of millennialism.

[ Millennialism is the belief that there will be a Golden Age or Paradise on Earth in which “Christ will reign” prior to the final judgment and future eternal state (the New Heavens and New Earth). In fact, this will be the rule of the Masonic Jewish (Illuminati) bankers fronted by the Luciferian Anti-Christ. ed.] [see: http://kabbalahstudent.com/the-power-of-the-sixth-millennium/]

“At the turn of the twentieth century, there appeared the Scofield Bible with a Jewish interpretation of the prophecies. With the wide use of this “helpful” aid, all the American churches have silently become synagogues. We now have Baptist Jews, Methodist Jews, Church of God Jews, apostate Catholic Jews, and many Protestant Jews throughout America. We are aliens in our own country because of false religion. All are praying for divine deliverance into that “Divine Government” which Cornwallis knew to be the British Empire.

“A false religion has been used to deceive us into allegiance to our enemies of Yorktown and Bunker Hill. No! Not a gun has been fired but the invisible and malignant process of conquering America with the Jew’s religion has gone on unabated.

“The Union Jack has been planted in our hearts with religious deception. All has happened “legally,” “constitutionally,” “freely” and completely within our most sacred trust — our churches. Religious deception is a painless inoculation against the truth. It cannot be removed from the conscience with surgery, yet it is the motivator of our actions and directly controls our lives.

“Once man gives over to false religion, he is no longer rational because he originates no thought. His life is controlled by whoever controls his religion.

“The veil of false religion is the sword of Damocles and its power to control humanity defies even the imagination of tyrants who use it.”

“This is not to say that George Washington was a traitor willingly, or knowingly. He was beguiled into a Satanic religious order that insidiously controls men’s minds. So have American statesmen and military leaders down through the years have given aid and allegiance to the enemies of the United States because they did not have knowledge of the invisible subterfuge that stalks this land.

My eyes were opened the day my colleague from Ohio handed me Wagner’s “FREEMASONRY AN INTERPRETATION.” If every American would read it, they would no longer ask why and how it has happened.”