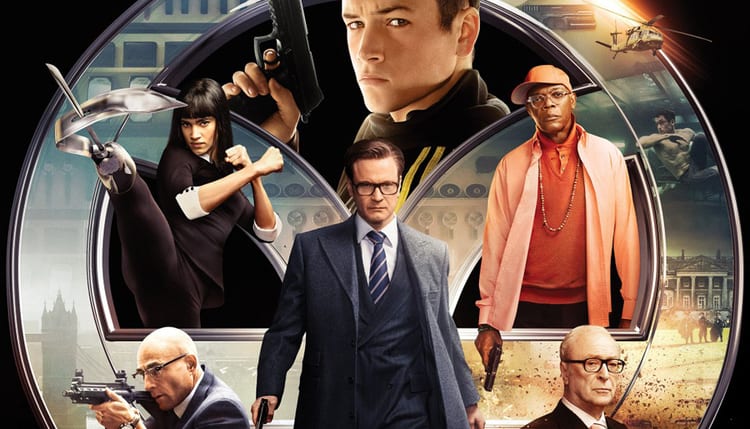 During a commercial break on The Common Sense Show in February of 2015, Deborah Tavares told me that I really should go see the move, The Kingsman, because there are so many elements present in this movie which show us where so much of our technology is headed.

Gary “Eggsy” Unwin (Taron Egerton), whose late father secretly worked for a spy organization, lives in a South London housing estate and seems headed for a life behind bars. However, dapper agent Harry Hart (Colin Firth) recognizes potential in the youth and recruits him to be a trainee in the secret service.

Meanwhile, the villainous Richmond Valentine (Samuel L. Jackson), who masquerades as a philanthropist, launches a diabolical plan to solve the problem of climate change via a worldwide killing spree resulting in extreme depopulation.

Controlling the Leadership of the Planet

There are two important New World Order messages associated with this movie. First, the minions of the evil Richmond Valentine are forced to accept implants. The implants control the minions by exploding for reasons related to insubordination.

Valentine, with his public persona known for philanthropy, employs the “exploding microchip technology” to control the various heads of state that he meets with. During these meetings, the heads of state are microchipped and become part of Valentine’s Army in order to rule the world. Thus, the leadership of the planet is compromised through the implantation of microchips.

The Planned Population Reduction of Humanity

Valentine’s second part of the plot is to destroy most of humanity to prevent extreme climate change. The plan to control humanity is carried out through the much heralded giveawayof SIM cards, granting free cellular and Internet access. Much like the sheep of today, the public lines up for miles to receive the free (Obama) cell phone. However, the free SIM card is a Trojan Horse and is designed to control and ultimately destroy humanity.

After the elite are safely tucked away in a well-guarded underground facility in Sweden, Valentine unleashes his plan in which the frequency of the SIM card is changed and instantly, in every part of the planet, the people of this planet spontaneously and violently turn on each other and begin to kill one another.

Valentine’s plan is to allow humanity to destroy itself and when the job is complete, the elite, controlled by Valentine’s implants, will emerge from their hideaway and will be ruled by the evil madman. Thus, the world will be safe from the ravages of global warming.

In December of 2012, I detailed how a family, whose father worked for FEMA in counter-bioterrorism and had recently retired, told me that he and other like-minded DHS and FEMA personnel were going into hiding because of what was coming. He further told me that our government had bio-agents which could promote extreme violence for a prolonged period of time. He said he had information that this would be unleashed for purposes ultimately tied to social control. He stressed to me that life was about to get very unsafe which is why he was going into hiding. They likened this coming event to an attack of Zombies and if you recall, it was in the Fall of 2012 that DHS began to carry out live Zombie suppression drills in places like San Diego on Halloween.

At the end of 2012, I asked him how long we had, and he replied that this could happen in two to three years. We are now in this time frame. This revelation came out at the same time Doug Hagmann brought forth very similar warnings associated with an individual he dubbed “Rosebud”.

With regard to implants and exploding heads, there was a lightheartedness associated with the movie designed to take the edge off of the exploding heads and effects of the mind control SIM cards. My son asked me if the technology exists today and I informed him the SIM card frequency/mind control technology designed to control behavior through frequency modulation has been in existence since at least 1961 through the mind control work of Jose Delgado.

The Dawn of Micro-Chipped Mind Control

In the 1960’s, Spanish neurologist, Jose Delgado was involved in a noteworthy bullfight. Without any real bullfighting training, he bravely stepped into the ring with a very dangerous and deadly bull. However, Delgado had a secret weapon.  He had previously implanted a radio-equipped electrode which was implanted into the bull’s limbic system (i.e. emotional center of the brain) which he called “stimoceivers.” Delgado subsequently demonstrated that he could manipulate an organism’s mind and body via remote control technology. Thus, as the bull charged, an invasive electrical signal penetrated the bull’s limbic system and the bull calmly broke off the attack in mid-charge.

Delgado found that by stimulating different regions of the limbic system, which controls emotion, Delgado could also induce fear, rage and a variety of other emotions, that he was able to manipulate the type and intensity of emotional reactions. Thus, Delgado discovered the fine art of mind control.

Intrigued by his work, Delgado was invited to teach and be a guest lecturer at such prominent universities such as Harvard and Yale. However, in 1968, Delgado went to work at the Stanford Research Institute (SRI) and this is where much of his research trail grows cold. We now know that SRI was a CIA front and was connected to the MK Ultra experiments. In 1974, Delgado abruptly returned to Spain and later became an outspoken opponent of mind control and its potential for harm and misuse by totalitarian societies. Perhaps, he was not on board with the CIA and what they eventually had planned for the American people.

In cats, monkeys, bulls and even humans he repeatedly demonstrated that he could control emotion and ultimately behavior. In one experiment, Delgado stimulated the temporal lobe of a 21-year-old epileptic woman while she was calmly playing a guitar; in response, she flew into a rage and smashed her guitar against a wall, narrowly missing a researcher’s head. Perhaps the most medically promising finding was that stimulation of a limbic region called the septum could trigger euphoria, strong enough in some cases to counteract depression and even physical pain.

Later Delgado was able to impact the hypothalamus of a cat and induce uncontrollable rage in the animal. Keep in mind that this technology is over 60 years old. One can only imagine how far this technology has come during that time.

Delgado’s famous bull fight and the angry cat are depicted in the following video. 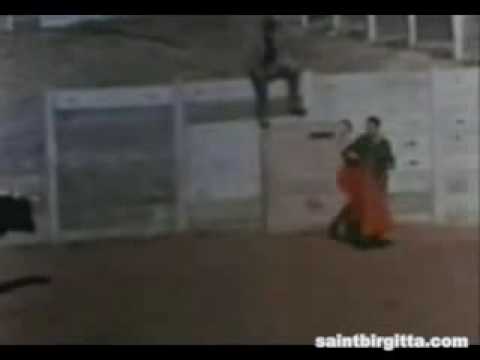 The lesson is clear, embedded chips can turn normal people into crazed killers and it can take crazed killers and turn them into passive beings. Interestingly, the most famous graduate of the MK Ultra program was the Unabomber, Ted Kaczynski.

Many are predicting that biometrics will be required to access the Internet. The fact is that some want your biometric information because this is the first step in gaining control over your mind. The main threat to humanity lies in the fact that the technology exists to control all of human behavior at one time. A reasonable person would certainly ask “how is that possible?”  To answer that question, I refer the readers to Nick Begich’s website in which he details how mass electrical signals can be beamed up from an array of antenna and bounced off the ionosphere in either a narrow beam covering a specific and defined geographic area, or it can be reflected back to earth in a broad beam application in which millions could be impacted by one electrical signal designed to change human behavior. We know this technology as Project HAARP.

United States Patent 5,159,703, Lowery, October 27, 1992, Silent Subliminal Presentation System, Inventors: Lowery, Oliver M. Appl. No. 458339 Filed December 28, 1989, discusses the microwave technology necessary for mind control. In this patent, we witness the move from the mind control of certain individuals who might have been programmed, which is frightening enough, to witnessing entire populations being controlled. The patent discusses the possibility of impacting millions at a time. The net effect of the technology is enhanced when there is a transducer in the body such as an embedded microchip. 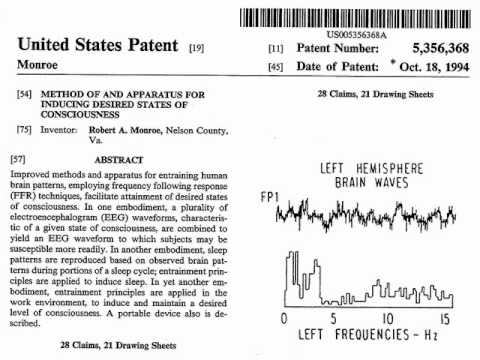 Particularly revealing in the arena of mind control, is Dr. Begich’s work on voice to skull technology. In 1997, he displayed this technology for the European Parliament who promptly issued a ban on the use of the technology. Unfortunately, the technology has moved forward in recent years despite the ban.

Before you write to me and state that this could never happen, please spend 30 minutes on the Begich website, and analyze the validity of his observations. Begich has done a detailed analysis of the patents associated with HAARP, and very clear conclusions about the intent of these technologies can easily be made after examining the facts. Most awake people are aware that HAARP is a weather modification device. However, as a result of my research, I have come to the conclusion that HAARP’s biggest danger to humanity is the mind-control potential related to this technology. Sadly, Dr. Nick Begich has been warning us about this potential for 18 years and it is only now that significant numbers of researchers are starting to pay attention.

A Very Ominous Warning From the Inventor of Electromagnetic Mind Control In his later years, and after working for the CIA for over 40 years in perfecting this technology, Dr. Delgado was very critical about the distinct lack of Bioethics and consumer protection with regard to these technologies. Until his death a few years ago, Delgado remained particularly critical of technologies which can change human nature. Delgado, stated the following:

“This technology has two sides, for good and for bad, and we should do what we can do to avoid the adverse consequences. We should try to prevent potentially destructive technologies from being abused by authoritarian governments to gain more power or by terrorists to wreak destruction. However, Delgado is a realist as he postulates “can you avoid knowledge? You cannot! Can you avoid technology? You cannot! Things are going to go ahead in spite of ethics, in spite of your personal ethics.”

The above quote from Delgado is a very ominous warning about how serious the subject of mind control is about to become for every person. After researching Delgado’s past, it is clear that he felt the same about mind control as Einstein felt about the unveiling of nuclear weapons.

In the movie, The Kingsmen, the mind control technology was beta tested at a rural church in Kentucky. The Pastor, who used horribly inappropriate terms and was totally out of control, was depicted to be a facsimile of Alex Jones. In this brief scene, Alex, the person, and his work were marginalized in very graphic terms. The reference was so obvious that my son picked up on the not so subtle references to Alex.

This article demonstrated that the right to control your individual body is under attack on a number of fronts.

And interestingly, Hollywood, through movies like The Kingsmen, are simply telling us that the elite are going to use the technology against humanity.

This article demonstrated that electromagnetic manipulation of the mind is over 50 years old. Further, it was established in this article that technologies such as Project HAARP are very real threats to all people and some of the supporting governmental patents were presented as well.

The most surprising aspect of my research into this technology is not how far the technology has advanced, it centers around how easy it was to obtain information on the degree of sophistication of this technology.

As stunning as this technology appears to be, as printed in this article, what is written here is child’s play compared to what has been developed and is in the process of being integrated into the police state surveillance grid.