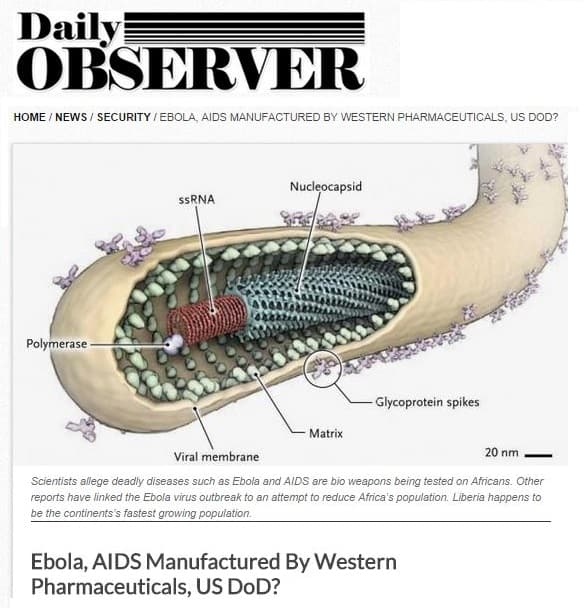 A startling report from the Liberian Observer, Liberia’s largest news paper, claims that the United States is directly responsible for scientifically engineering the Ebola virus in abioterrorism lab and injecting Africans with it through the guise of vaccinations.

The wildly accusatory article, by Dr. Cyril Broderick, Titled “Ebola, AIDS Manufactured By Western Pharmaceuticals, US DoD?” Claims that the Department of Defense unwittingly used Africans to test experimental bioweapons by pretending they were vaccinating them against disease.

“Reports,” he argues, “narrate stories of the US Department of Defense (DoD) funding Ebola trials on humans, trials which started just weeks before the Ebola outbreak in Guinea and Sierra Leone.”

What’s more is that over a month ago, as reported by Jeff Rense.com, ,

The Ebola pandemic began in late February in the former French colony of Guinea while UN agencies were conducting nationwide vaccine campaigns for three other diseases in rural districts. The simultaneous eruptions of this filovirus virus in widely separated zones strongly suggests that the virulent Zaire ebola strain (ZEBOV) was deliberately introduced to test an antidote in secret trials on unsuspecting humans.

The cross-border escape of Ebola into neighboring SierraLeone and Liberia indicates something went terribly wrong during the illegal clinical trials by a major pharmaceutical company. Through the lens darkly, the release of Ebola may well have been an act of biowarfare in the post-colonial struggle to control mineral-rich West Africa

Earlier this year, rural residents eagerly stood in line to receive vaccinations from foreign-funded medical programs. Since the cover-up of the initial outbreak, however, panicked West Africans rural folk are terrified of any treatment from international aid programs for fear of a rumored genocide campaign.

The mass hysteria is also fueled in a region traditionally targeted by Western pedophiles by the fact that filovirus survives longer in semen than in other body fluids, a point that resulted in murderous attacks on young men believed to be homosexuals. Ebola detonated fear and loathing, and perhaps that is exactly the intended objective of a destabilization strategy.

This ongoing series of investigative journalism reports on the ebola crisis exposes how West Africans are largely justified in their distrust of the Western aid agencies that unleashed, whether by mistake or deliberate intent, the most virulent virus known to man.

A pair of earlier articles by this writer examined the British and American roles in developing Ebola into a biological weapon and its antidotes into commercial products.

This third essay examines the strange coincidence of the earliest breakout in Guinea with three major vaccine campaigns conducted by the World Health Organization (WHO) and the UN children’s agency UNICEF. At least two of the vaccination programs were implemented by Medicins Sans Frontieres (MSF, or Doctors Without Borders), while some of those vaccines were produced by Sanofi Pasteur, a French pharmaceutical whose major shareholder is the Rothschild Group.
This report uncovers the French connection to the African Ebola pandemic. 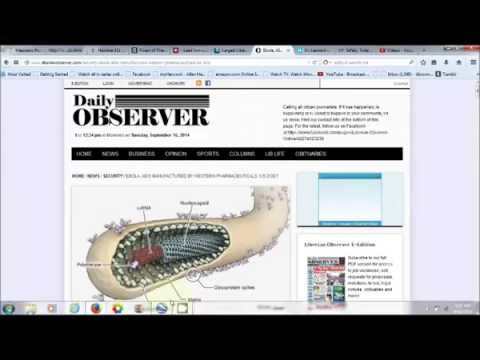