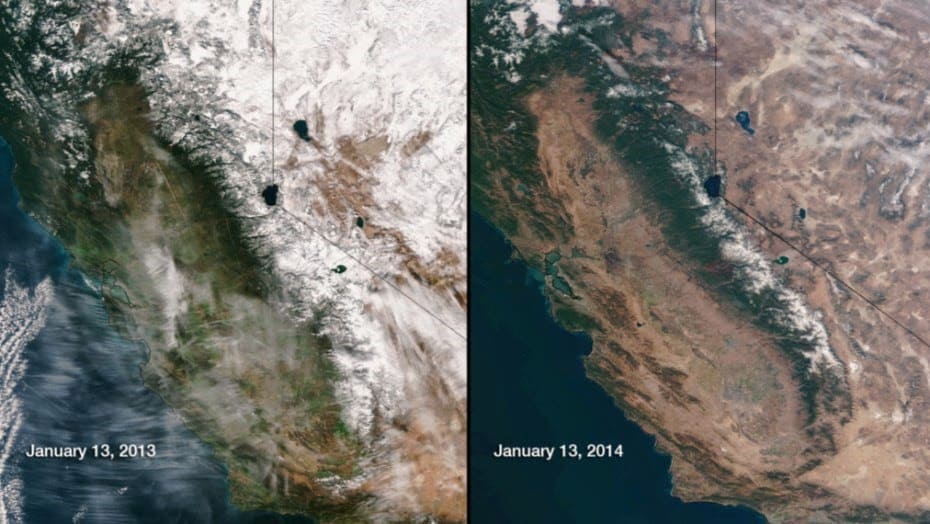 Since November of 2013, the beginning of the rainfall season, California residents have experienced heavy geoengineering and chemtrail activity almost every day, which has transformed the Golden State, normally anagricultural miracle, into an arid dust bowl. Paul Adams, J.D.
Activist Post

The sun is out daily, temperatures are well above normal, yet the sky is grey, the horizon is silver, and you often cannot see mountains that are only a few miles away (grey-out). The local weather forecasters say that the forecast is sunny “hazy” or with “high clouds”, which is their (NASA/NOAA)
way of saying chemtrails.Our occult rulers are now openly demonstrating their god-like power over nature. If history is any guide, this manufactured drought will likely be used to create artificial scarcity of water and food. Like oil, diamonds, and utilities, this artificial scarcity will result in increased profits for select corporations and increased government/corporate control over the populace. As Joseph Stalin, Adolf Hitler, and Henry Kissinger knew, populations desperate for food do not often oppose the crimes of their government or hidden power structure behind it. 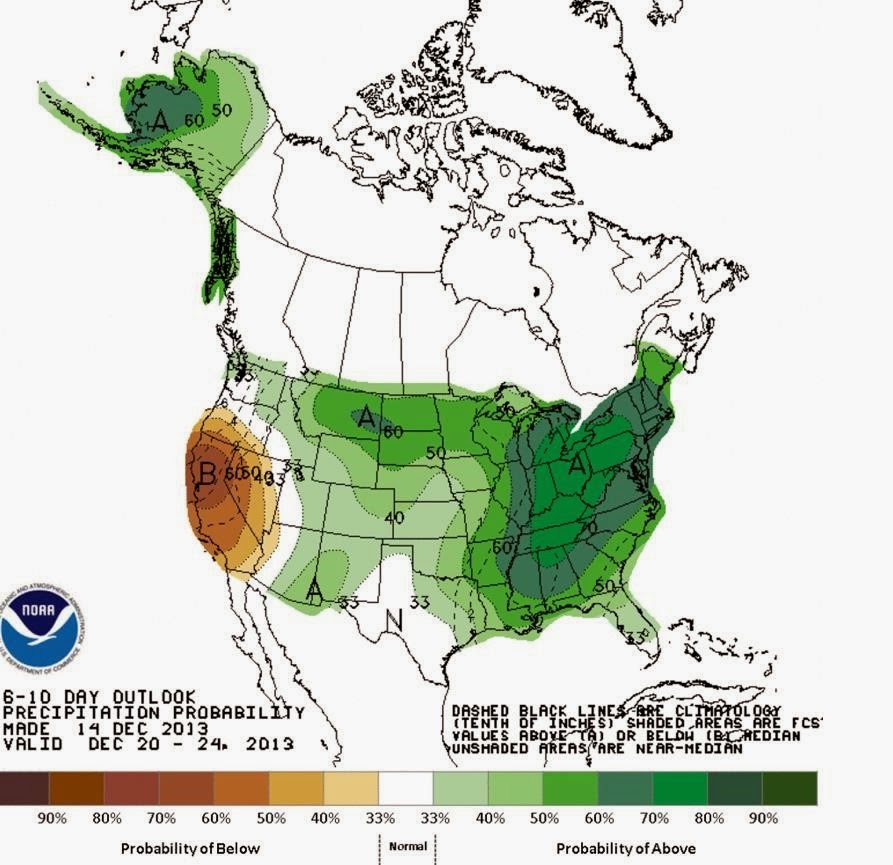 Humanity and the natural world are under geoengineering attack and our very survival may be at stake.Geoengineering and Chemtrails Manufacture DroughtClimatologists report that the 2013-2014 rainfall season is well on its way to becoming California’s driest period in more than 400 years. In 2013, California received an average of just over 4 inches of rain. Downtown Los Angeles, which receives nearly 15 inches of rain during a normal year, only got 3.6 inches in 2013. It’s currentlyCalifornia’s driest period since it was granted statehood in 1850.

It is no coincidence that the extreme drought coincides with unprecedented geoengineering and chemtrail activity. In Engineered Drought Catastrophe, Target California, Dane Wigington of Geoengineering Watch says, “intentionally caused drought is weather warfare.” California’ drought works like this:

With the combination of constant aerosol spraying and ionosphere heater utilization (HAARP) the climate engineers have effectively cut off the flow of moisture to the state of California. Why? First, California is possibly a climate “sacrifice zone”. This means that California is collateral damage for the constant parade of engineered snow storms being whipped up further east in the US. The rain blocking high pressure ridge that the climate engineers have locked in place over the western US and the Eastern Pacific pushes the jet stream straight north, carrying the moisture with it before rain can come anywhere near California. This moisture then travels as far as Alaska and the Arctic. The jet is then turned back south as it wraps clockwise around the HAARP/ionosphere heater created dome of high pressure. Then, it is pumped all the way down to the southern US carrying heavily sprayed and chemically ice nucleated moisture with it which enhances the artificial cool down of the eastern US. 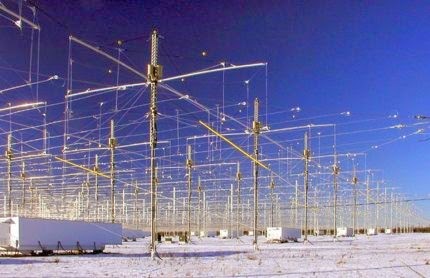 Dane also notes that during a drought, a population that has no water and cannot grow food does not tend to be in a position to effectively protest the crimes of its government. California has historically contributed to much of the nation’s food supply so that this catastrophic drought has very far reaching ramifications. Control the food supply and you control the population. There is also the growing effort by the government to take control of water rights in California and other regions in the west.Importantly, In 2011, Rothschild LLC, a private investment company led by Chairman Sir Evelyn de Rothschild and CEO Lynn Forester de Rothschild (the infamous Rothschilds – puppet masters), acquired a 70% interest in Weather Central, LP, the world’s leading provider of interactive weather graphics and data services for television, web, and mobile.Why would the Rothschilds be interested in owning the largest and most recognized weather modeling organization? Because when you are involved in climate decimating geoengineering programs, you must also control the “forecast” models to cover your tracks.

Defense contractor “Raytheon” does all the “forecast” modeling for the National Weather Service and NOAA. Lockheed Martin does the modeling for the FAA. Since both of these private defense contractors are up to their necks in weather modification patents and programs, the “forecasts” are more or less the “scheduled” weather. Now, with the Rothschild’s acquisition of the dominant private modeling organization, the control of weather “modeling” seems complete. This control of “forecasts” and “graphics” provides for the constant visual conditioning that makes the population more likely to accept the constant spraying and manipulation of our weather as “normal”. When the nightly weather “forecast animation” matches what the public sees in the sky, right down to the upper level “haze” or “overcast” from the constant spraying, all seems to correlate, so nothing more is questioned.

Food as a Weapon

History clearly demonstrates that the occult power structure uses food as a weapon against target populations to solidify power and impose absolute tyrannical control. Food can be withheld from the masses by preventing it from being grown and harvested, which includes manufactured droughts, by contaminating it and rendering it unfit for human consumption or by simply preventing food from being distributed to a targeted population.

Josef Stalin engaged in his own Soviet-style Holocaust when, in 1932 and 1933, and estimated six to 20 million people in the Ukraine died from starvation in order to eliminate the Ukrainians’ desire for becoming their own nation-state.

Upon assuming power, the Stalinist Communist regime rapidly nationalized the food industry and forced all of the region’s farms into collectives. Thus, Stalin’s version of the Holocaust came to fruition in what history has dubbed, the “Holodomor,” in which millions perished in only a two-year period when the Soviet government began to exterminate the Ukrainian population by taking control of food and food production. 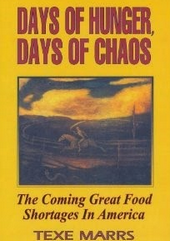 Food ration cards were also utilized as incentives to increase industrial production and were increased in value when productive Nazi workers would be promoted. Food ration cards were diminished in value for the failure to meet Nazi production goals. Hitler’s use of what psychologists refer to as classical conditioning techniques reduced the will of the German population to a pack of Pavlovian dogs who were conditioned to be totally dependent upon the government for their survival.

It is important to realize that Hitler and the rise of communism were totally dependent on U.S. bankers, politicians, and industry. Those with a true knowledge of history easily dismiss U.S. exceptionalism.

In November 1975 President Ford, based upon the tenets of NSSM 200, outlined a classified plan to forcibly reduce population growth in LDC countries through birth control, war and famine. Ford’s new national security adviser, Brent Scowcroft, in conjunction with CIA Director, George H. W. Bush, were tasked with implementing the plan and the secretaries of state, treasury, defense, and agriculture assisted in the implementation of these insane genocidal plans.

NSSM 200 formally raised the question, “Would food be considered an instrument of national power? … Is the U.S. prepared to accept food rationing to help people who can’t/won’t control their population growth?” Kissinger has answered these questions when he stated that he was predicting a series of contrived famines, created by mandatory programs and this would make exclusive reliance on birth control programs unnecessary.

With Kissinger and his disciples at the Council on Foreign Relations still having a great influence on U.S. policy, rising food prices due the manufactured drought may only be the beginning of woes.

While the occult rulers have been known to use food as a weapon, they are also prepared to use the manufactured drought as a water privatization scheme, that is, making billions in profits by charging exorbitant prices for water that would be falling naturally for free absent geoengineering. The World Bank and powerful corporations like Veolia want in on the action.

In the important Great Lakes episode of Jesse Ventura’s investigative television show, billionaire corporate raider/wall street asset stripper T. Boone Pickens brags that he has purchased most of the reservoir land surrounding major cities in Texas and that if the plebeians don’t pay him for water, “you won’t have any water” (at 13:15). Pickens will also work with crony politicians to utilize eminent domain to obtain any land that is necessary to deliver “his” water to cities in Texas.

The Bush family, well known for financing Hitler, the 9/11 false flag, and Highway of Death, bought 300,000 acres on South America’s and World’s Largest Aquifer, Acuifero Guaraní, which runs beneath Argentina, Brazil, Paraguay, and Uruguay. If not monopolizing the water supply, what business do the Bush’s have in Paraguay?

If manufacturing a drought for the purposes of gaining profits and control out over a population sounds like something out of a James Bond movie, it is. In Quantum of Solace, the antagonist corners Bolivia’s fresh water source. This allows him to gain tremendous control over the government and citizens. Perhaps this move was predictive programing for the public/culture creation for the water wars to come thanks to geoengineering.

The globalists consider fresh water blue gold, and geoengineering with chemtrails is being used to make this Malthusian nightmare of artificial scarcity a reality.

Interestingly, Google co-founder Sergey Brin bankrolled the production of the world’s first lab-grown hamburger. The Internet entrepreneur has backed the project to the tune of €250,000 (£215,000), allowing scientists to grow enough meat in the lab to create a burger – as a proof of concept – that was be cooked and eaten in London last year.

Though calculations of the environmental impact of the lab-grown meat have yet to be published, early indications suggest that cultured meat could reduce the need for land and water by as much as 90% and overall energy use by up to 70%.

Is Sergey aware that the California drought is being geoengineered?

Because so much geoengineering and chemtrail information is available on the Internet, the globalists are now moving from covert to overt operations. The plan is to continue geoengineering extreme weather and then use “climate change” as a justification to pass tyrannical legislation like carbon taxes. Create the problem, get the desired public reaction, then impose the solution prepared by the globalists from the beginning.

Carbon tax huckster Al Gore and mad scientist David Keith have recently appeared on television shows to advocate geoengineering to combat “climate change” and “global warming”. During the interviews, they have no problem lying through their teeth by implying that massive geoengineering operations are not yet operational when in fact they have been going on since at least the 1990s. David Keith does admit that spraying particulate matter into the atmosphere could kill people but ambiguously claims that it could also prevent climate change deaths.

Al Gore continues to give talks on the danger of climate change without discussing the dangers of geoengineering climate change. Recently he warned that “the Dust Bowl is coming back, quickly, unless we act.” In fact, the dust bowl has returned because “they” acted by geongineering the drought.

David Keith has also been given a platform in the CIA-friendly Washington Post. One of his articles is entitled, “One problem with geoengineering: Once you start, you can’t really stop.”  Therefore, the globalists are suffering from delusions of grandeur and plan to play god indefinitely.

It is imperative that we inform others that California’s drought has been geoengineered to create artificial scarcity of food and water, the essentials of life. This will result in greater corporate/government control over the population and increased profits for certain select corporations. It could even result in massive democide.

There is NO NATURAL WEATHER at this point. We are all the victims of “weather warfare” and are being poisoned by the toxic metal fallout.