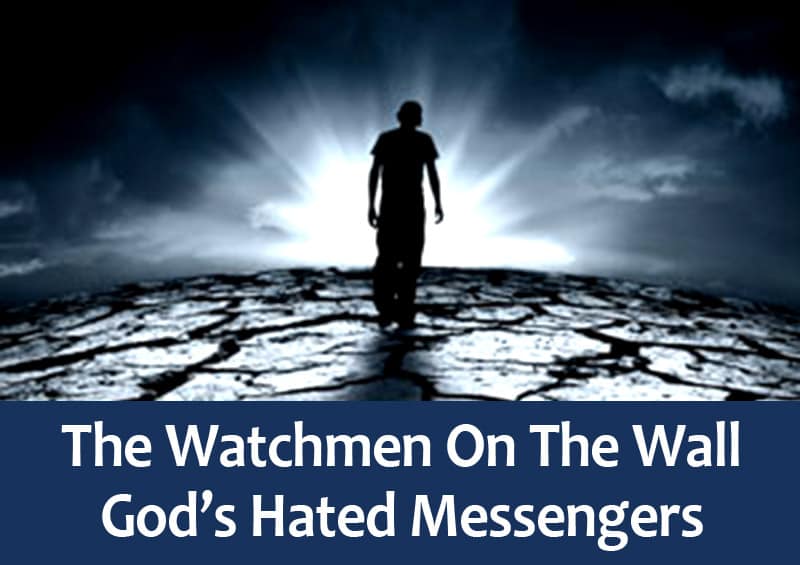 Asking people to critically examine their long held opinions and belief systems doesn’t win any popularity contests to be sure. We read the stories in the Bible of the prophets, and God’s ‘watchmen’ and see them as hero’s, worthy of great respect since they were obeying God and trying to warn people of coming danger. We read how unpopular they were, how they were rejected, ridiculed and worse and we hold them up as examples of men and women of great faith. Yet the response to those who ‘sound the alarm’ today is not much different than it was in biblical times. A popular term to discredit those who are bringing awareness to unpopular truths today is “Conspiracy Theorists”.  A little known fact is that the term “conspiracy theorist” was coined by the CIA in the 1960’s. The intent was to create ridicule and discredit anyone questioning the official story of the JFK assassination. Now who would have inspired that?

Ridicule has always been one of the devils’ weapons. Let’s look at some of them:

(Of course there is much more) … and the agenda of satan and his followers being to gain knowledge and power and be like God.

I strongly believe that every believer should be aware of and informed about the enemy’s devices in these deceptive times.

Some churches today deal with temptations and thoughts brought by the evil one. A few churches deal with false religion and compromise, but where are the churches that are dealing with the secrecy of the occult and the weapons that are currently in place, strategically designed to deceive God’s people, while remaining hidden from them?

“But all things that are reproved are made manifest by the light: for whatsoever doth make manifest is light.” Eph 5:13

I read recently in a book by Russ Dizdar, The Black Awakening, that there are covens of witches in every single town in the United States. In saying ‘witches’ I am referring to people who offer actual blood sacrifices to Satan to gain power in this world. Russ went on to say that they are all quite cognizant of the fact that they are working toward a common goal with satanists worldwide to bring in a New World Order. Their mode of operation is secrecy. Among the many devious and destructive things they conjure/pray for, they cast real spells to ensure the “invisibility” of their work. They have been successful in blinding the world, including a great majority of the church to what the devil is up to.

Not everyone is called to be a watchman. But a basic understanding of the enemy’s devices is something the Bible clearly teaches we should be equipped with.

“Lest Satan should get an advantage of us: for we are not ignorant of his devices.”  2 Cor 2:11

When police officers are trained, they are taught about the law. But they are also taught about criminals, their methods, personalities, and things to be aware of in order to be able to detect criminal activity. Who is better equipped in a high crime area, a trained police officer or a sheltered suburbanite? The answer is obvious. If we understand criminal behavior, or in this case, the devices and workings of evil, we are better equipped to discern it, react appropriately, and very possibly protect our own lives and those around us. How much sense does it make, then, that the church at large today actively avoids the topic of Satan and his evil agenda to destroy the church, and the entire human race, for fear of scaring people? The Bible talks a lot about the devil and how we are to deal with him. We are to be sober and alert, knowing that he is seeking someone to devour. Jesus’ first two acts of ministry were to fight Satan in the wilderness and to drive out a demon.

There is a tendency today to go through Paul’s epistles and seek out the scriptures which encourage and build us up. But Paul makes many references to Satan, his snares, his devices and his works. I would submit that believers must be taught about these things because the enemy is to be dealt with and can be defeated! (Which is NOT something Satan wants believers to be aware of.)

Then there is this scripture in Hosea:

“My people are destroyed for lack of knowledge: because thou hast rejected knowledge, I will also reject thee,” HOS 4:6

The kingdom of darkness is actively involved with ignorance. And ignorance leads to destruction in this case. Ignorance is one of the most terrible traps of the kingdom that rules this world. And yet most churches today are leaving believers ignorant to the devices of satan.

“And Pharaoh said, I will let you go, that ye may sacrifice to the Lord your God in the wilderness; only ye shall not go very far away: intreat for me.”  Exodus 8:28

Satan has infiltrated the church with a gospel of peace without repentance. This watered down gospel does not lead very far away from sin.

“Even him, whose coming is after the working of satan with all power and signs and lying wonders, And with all deceivableness of unrighteousness in them that perish; because they received not the love of the truth, that they might be saved.” 2Thess 2:9-10

This ‘soft gospel’ is a great deception. A disturbing reality is that many today who believe they are Christians, possibly do not actually know Jesus. As such, they do not have the Holy Spirit’s discernment. The further pitfalls are obvious – these ‘believers’ share their ‘soft gospel’ and as a result, the world has come to see this counterfeit as true Christianity. But even true believers are ignorant to many of Satan’s devices because of  the same soft gospel! I’ve heard more than one pastor say “We don’t want to frighten people!” or “We don’t want to give the enemy glory by focusing too much on him!” and again “All we need to overcome Satan is faith!”  I disagree. The truth is frightening looking through eyes of the flesh! But when looking through spiritual eyes, we see only the TRUTH of Jesus’ TRIUMPH over Satan!


“And having spoiled principalities and powers, he made a shew of them openly, triumphing over them…”  Col 2:15.

If understanding Satan is equal to glorifying him then I would argue that we need to throw a great deal of the Bible away since it deals so much with this very real and vicious enemy of God.

Most Christians know that their warfare is not against flesh and blood, that they wrestle with principalities, with powers, with the spiritual forces of wickedness in celestial places. They know it in theory, but do they know it in fact? If you ask the average churchgoer “when did you last engage in a spiritual battle?” They will likely refer to a temptation, conquering a personal habit or problems in their relationships. While these are very real battles and my intent is not to make light of how the enemy distracts and has destroyed many lives through addiction, unresolved anger and hurt, the battle at hand is greater yet. The church has been lulled to believe that our personal battles are all there is to the battle with evil, and that a real, tangible war against Satan was something for biblical days. And this is exactly what Satan would have us think. Because the result is disarmament! An unarmed army of God! I would submit that is what we have today!

Watchmen are warning the people, but the people are are under a spell. I believe that is exactly what evidence and scripture tells us.

Hence, they do not heed the watchman’s warning of what is coming. And it is sin which made them vulnerable to the sorcerer’s spell to begin with, so adults are without excuse.

“…and cinnamon, and odours, and ointments, and frankincense, and wine, and oil, and fine flour, and wheat, and beasts, and sheep, and horses, and chariots, AND SLAVES, AND THE SOULS OF MEN.”  Rev 18;13

That had me sit up for a minute. “Souls of men”.  There are several ways in which the souls of men today are being used as ‘merchandise’. The word “consumers” came to mind. I got a picture in my mind of people watching their television sets, where a manufactured world of items promising to bring fulfillment is paraded before their eyes. The reality is that the “souls of men” in America are being used to line the pockets of wealthy men who are using that wealth to bring about the ‘New World Order’ which will set the stage for Antichrist to rule with a tyranny never before known on the earth.There is more human trafficking taking place right here in the US. There are unthinkable mind control technologies, too horrific for most to be able to hear about. These people need real help by mature Christians. They need Jesus! We can’t help them if we don’t know they exist.

God has raised up his watchmen all over this country and all over the world, and while this is not a job they asked for, they stand at their posts sounding the trumpet to a people who are under a spell / in a stupor. The trumpet is sounded for those who’s faith and hope is in Jesus Christ. They have been given discernment and gained skill at spotting the enemy and we have him in our sights. But they sound the alarm and God’s people tell them to pipe down.

“I set watchmen over you, saying, ‘Pay attention to the sound of the trumpet!’ But they said, ‘We will not pay attention.’” ~Jeremiah 6:17

So thou, O son of man, I have set thee a watchman unto the house of Israel; therefore thou shalt hear the word at my mouth, and warn them from me. When I say unto the wicked, O wicked man, thou shalt surely die; if thou dost not speak to warn the wicked from his way, that wicked man shall die in his iniquity; but his blood will I require at thine hand. Nevertheless, if thou warn the wicked of his way to turn from it; if he do not turn from his way, he shall die in his iniquity; but thou hast delivered thy soul.” Ezekiel 33:1-9