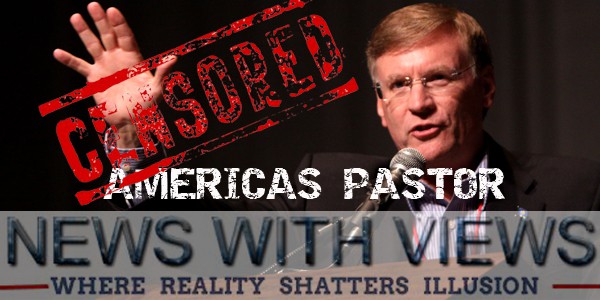 Chuck Baldwin has left News With Views. His outspoken position against the acceptance of the political state of Israel won him an official disclaimer last month, which I mentioned briefly when posting his last article. Here is the disclaimer that was on News With Views:

[NOTE: The opinion in this article is the opinion of the author and is not necessarily the opinion of NewsWithViews.com, it’s employees, representatives, or other contributing writers. NWV supports President Donald Trump and the Jewish State of Israel.]

His stand against inconsistencies by Donald Trump (Chuck supported him, albeit pensively, in the beginning) resulted in News With Views warning him that any further articles criticizing the president or Zionism would not be posted.

I went to snapshot the disclaimer for his previous article on NWV and found that Pastor Baldwin’s articles are only archived through 2015. All recent articles have apparently been removed.

The Wayback Machine internet archive has limited pages from NWV stored, none are Chuck Baldwin’s.

This is a clear example of the controlled “Truth Movement”. With the public having virtually limitless access to information through smart phones and the internet, the Workers of Iniquity are working overtime to control the narrative, distract, divide, spin and deceive as a world full of people begin to wake up to how incredibly duped we’ve all been. Those who get in the way are censored, disappear, or worse. It reminds me of stories from behind the Iron Curtain, not the United States of America.

Here are some of the Globalists’ goals in the their’ own words.

Let’s keep Chuck Baldwin in our prayers, as well as the owners of News With Views.

HERE’S CHUCK BALDWIN’s NOTE, if you missed the end of his column:

Over the years, many websites, newsletters, publications, newspapers, periodicals, magazines, etc., have carried my columns. I have also written columns for NewsWithViews.com for 15 years. That amounts to 958 columns in total. But last week, the owner of NWV told my office that if any of my future columns were critical of Donald Trump or the State of Israel they would be censored.

Ladies and gentlemen, I have never pandered to any individual, organization, or group in what I write or say, and I’m not going to start now. Therefore, I have withdrawn my columns from NewsWithViews.com.

This is an excellent illustration of just how deep the problem is. This website owner (with whom I have had a very friendly business relationship for many years and whom I believed was a committed patriot and constitutionalist) said that a wealthy Zionist contributor had threatened to cut off his $1,000 per month donation to the website if I was allowed to continue to write critical comments against Israel. Imagine: there are 70 writers on this website, and ONE writer (me) tells the truth about Israel, and that ONE writer (me) must be censored. Worse yet is the fact that the website owner said he actually AGREES with me about the Zionist problem.

That’s how it works, folks. These angry, intolerant, wealthy Zionists use the power of their money to intimidate and coerce not only the mainstream media but also the conservative media into kowtowing to their radical Zionist agenda.

So, the owner of NewsWithViews.com sold his convictions for $1,000 a month. Well, I won’t sell mine FOR ANY PRICE. I will let the Author of truth (God) and the lovers of truth (my readers) make up the slack for any tyrannical Zionist who thinks he can purchase my tongue or my pen with his blood money. As far as I am concerned, the rich, manipulative, intolerant Zionist–to whom the website owner has sold his convictions–can take his $1,000 per month donation and shove it up the crack of his Talmud.

P.P.S If this act of censorship against me by NewsWithViews.com disgusts you, please let the management know.

Here’s the link if you want to do the same: News With Views