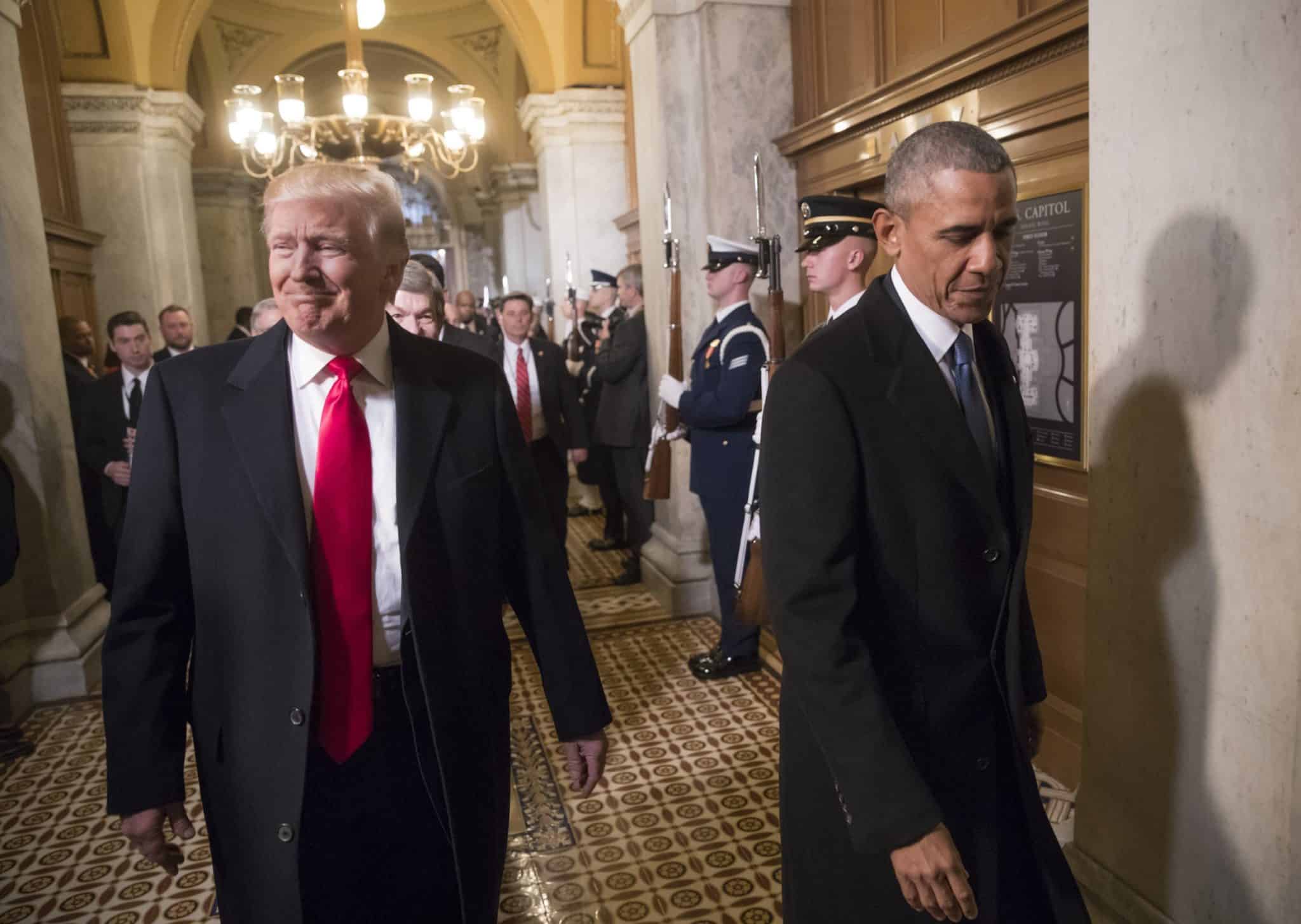 Trump has appointed as many neocons, war hawks, and insiders to his administration as Barack Obama or G.W. Bush–maybe more. His promotion of Obamacare 2.0 was a total embarrassment to everything he campaigned for. He twisted the arms of House and Senate conservatives as much as Bush used to do–maybe more so. Thankfully, the House Freedom Caucus stood like Stonewall Jackson and refused to compromise their convictions. They made Trump look like a total wuss.

Can you imagine? Trump allied himself with the despicable neocon Paul Ryan against conservative champions such as Rand Paul and Thomas Massie. It was disgusting! I’m beginning to think Donald Trump doesn’t have a principled bone in his body. If he would compromise on Obamacare for the sake of a political victory, he would compromise anything.

Now, he has promoted his 36-year-old Zionist son-in-law, Jared Kushner, to be the head of a brand new White House office: The White House Office of American Innovation. Kushner is already Trump’s top foreign policy, domestic policy, and personnel adviser, as well as America’s de facto top diplomat as Trump’s top adviser on relations with China, Mexico, Canada, and the Middle East. Now, Kushner is assuming the job of Trump’s top economic adviser. In reality, Jared Kushner might be running the White House.

Kushner (a lifelong Democrat) is working with globalist elites such as Microsoft founder Bill Gates, Apple chief executive Tim Cook, Salesforce chief executive Marc Benioff, and Tesla co-founder and chief executive Elon Musk. Musk is so radical in his globalist ideas that he wants to extend his globalistic utopia to other planets. And Kushner is making this goofball one of America’s economic leaders? What a crock!

“The group has already hosted sessions with more than 100 such leaders and government officials.”

“‘We should have excellence in government,’ Kushner said Sunday in an interview in his West Wing office. ‘The government should be run like a great American company. Our hope is that we can achieve successes and efficiencies for our customers, who are the citizens.’”

Government should run like a company? Really? The country’s citizens are the government’s “customers”? Really?

The purpose of government is simply to protect the freedoms and liberties of its citizens. Putting it in business terms, the people of the nation are NOT “customers.” They are the country’s OWNERS. They are not something from which to make a profit; they are something to be protected as the country’s rightful leaders. The government does not exist to profit from the citizenry; the government’s only purpose is to protect the liberties that our Creator has given to the citizenry by Natural Law.

Donald Trump’s appointments are by far the richest in history, with a combined net worth of over $14 billion. Almost to a man, these people are rabid globalists who see only one thing: MONEY. They have little or no loyalty to the United States. The Constitution means absolutely nothing to these people. In fact, their view of the Constitution is it only serves to impede their international business aspirations. They have homes and properties all over the world. They are the movers and shakers of a burgeoning New World Order. And these are the people that Donald Trump is putting in charge of our country.

But to so-called conservatives and patriots all over America, Donald Trump can do no wrong. Alex Jones has become a pandering, sycophantic waterboy for Trump. So have countless radio talk show hosts, websites, publications, and “conservative” special interest groups. This is 2001 all over again.

This is not going to end well.

But the thing that has always concerned me the most about Donald Trump is his obvious propensity for more and deeper wars. Two months into his administration has done nothing except exacerbate my concern.

Special Forces troops and Marines have landed in Syria; the 82nd Airborne has been sent to Iraq; U.S. troops are being deployed to Yemen (this would be in support of the Sunni Muslim Saudi Arabian government’s war of aggression against Yemen); our military presence on Russia’s border has grown exponentially just since Trump became President; the U.S. Navy is encroaching deeper and deeper into the South China Sea; Trump is seriously considering significantly increasing U.S. troop levels in Afghanistan; the Pentagon is talking about sending troops to Somalia; and Trump is calling for the biggest buildup of military spending in modern memory.

Remember that the United States already spends more money on its military than the next eight countries spend COMBINED. What in Hades does Donald Trump have in mind? We have over 800 military bases in over 160 countries around the world. So far in this new century, the U.S. has invaded two Middle Eastern countries and continues to daily attack many more. And that’s NOT ENOUGH?

“The Pentagon under President Donald Trump is enjoying greater freedom to run its wars the way it wants — and not constantly seek White House approval on important decisions.

“Many in the military appreciate this increased autonomy, but critics charge it is raising civilian death rates, puts the lives of US troops at greater risk and leads to a lack of oversight of America’s conflicts.”

“Since Trump’s inauguration, the Marine Corps has brought an artillery battery into Syria, and the Army has moved in hundreds of Rangers, bringing the total number of US forces there to almost 1,000.”

“Trump has also faced criticism for his hands-off approach, especially after he approved a special operations raid in Yemen that went horribly wrong, leading to the death of a Navy SEAL, multiple civilians including children and a crashed helicopter.

“Though the White House insisted the raid yielded vital intelligence and was a ‘successful operation by all standards,’ critics said the military had been rash to execute the mission.

“Observers are also calling into question whether the Pentagon is allowing civilian casualties to mount.”

“Airwars, a London-based collective of journalists and researchers, said Friday it had become so overwhelmed tracking civilian deaths allegedly caused by US and coalition planes that it has stopped tracking Russian strikes.

“‘The decision to temporarily suspend our Russia strike assessments has been a very difficult one to take,’” Airwars director Chris Woods said.

“‘Moscow is still reportedly killing hundreds of civilians in Syria every month. But with coalition casualty claims escalating so steeply — and with very limited Airwars resources — we believe our key focus at present needs to be on the US-led alliance.’

“The Pentagon has acknowledged at least 220 civilians have been unintentionally killed since operations to defeat IS began in late summer 2014. Airwars estimates the real number to be more than 10 times that.”

The problem is that all of this killing and bloodshed that the U.S. armed forces are inflicting around the world is taking place with NO declaration of war. There is absolutely no legal, moral, or constitutional justification for all of these global acts of military aggression. NONE! We are simply bullying our way around the world because our political leaders see America as an empire, not as a republic. Presidents seem to believe they have the right to invade, attack, kill, maim, and destroy AT WILL–simply because they have the muscle to do it.

As I’ve said before, if Donald Trump truly wants to defeat ISIS, al-Qaeda, al-Nusra, etc., all he needs to do is stay out of the way and let Russia and Syria take care of it, because that’s exactly what they are currently doing. Of course, he would also need to get the CIA out of the way, because it is one of the biggest (if not the biggest) sponsors of these Middle Eastern terror networks.

I have repeatedly tried to educate the American public–especially America’s Christians–to the heinousness (in the sight of God and humankind universally) of the crimes of aggression. Whether it is abortion, unjustified killings by police officers, or preemptive, unjustified wars by military forces, the Crime of Aggression is the greatest crime against the Law of Nature that a nation can commit.

Accordingly, I brought a message that explains the significance of this Natural Law and the horrific consequences for nations that ignore and violate it. The message is called “The Crime Of Aggression: Condemned By The Law Of Nature And Nature’s God.” Sadly, almost no preacher even deals with this subject, and almost no Christian has ever heard it explained. Yet it is one of the most important laws dealing with nations in the entire Bible. From the murderous act of aggression via government-sanctioned abortion to murderous acts of aggression via government-sanctioned perpetual, preemptive war, the U.S. continues to violate this greatest-of-all national sins. God will NOT withhold His judgment on such a nation forever. This is a message you will likely hear nowhere else.

To order “The Crime Of Aggression: Condemned By The Law Of Nature And Nature’s God,” go here:

The Crime Of Aggression: Condemned By The Law Of Nature And Nature’s God

Did the people who elected Donald Trump really intend that he turn America into a giant corporation and deepen and extend America’s military involvements around the world? Somehow, I don’t think this was the change they had in mind.

Again, this is not going to end well.

P.S.  Over the years, many websites, newsletters, publications, newspapers, periodicals, magazines, etc., have carried my columns. I have also written columns for NewsWithViews.com for 15 years. That amounts to 958 columns in total. But last week, the owner of NWV told my office that if any of my future columns were critical of Donald Trump or the State of Israel they would be censored.

Ladies and gentlemen, I have never pandered to any individual, organization, or group in what I write or say, and I’m not going to start now. Therefore, I have withdrawn my columns from NewsWithViews.com.

This is an excellent illustration of just how deep the problem is. This website owner (with whom I have had a very friendly business relationship for many years and whom I believed was a committed patriot and constitutionalist) said that a wealthy Zionist contributor had threatened to cut off his $1,000 per month donation to the website if I was allowed to continue to write critical comments against Israel. Imagine: there are 70 writers on this website, and ONE writer (me) tells the truth about Israel, and that ONE writer (me) must be censored. Worse yet is the fact that the website owner said he actually AGREES with me about the Zionist problem.

That’s how it works, folks. These angry, intolerant, wealthy Zionists use the power of their money to intimidate and coerce not only the mainstream media but also the conservative media into kowtowing to their radical Zionist agenda.

So, the owner of NewsWithViews.com sold his convictions for $1,000 a month. Well, I won’t sell mine FOR ANY PRICE. I will let the Author of truth (God) and the lovers of truth (my readers) make up the slack for any tyrannical Zionist who thinks he can purchase my tongue or my pen with his blood money. As far as I am concerned, the rich, manipulative, intolerant Zionist–to whom the website owner has sold his convictions–can take his $1,000 per month donation and shove it up the crack of his Talmud.

P.P.S If this act of censorship against me by NewsWithViews.com disgusts you, please let the management know.