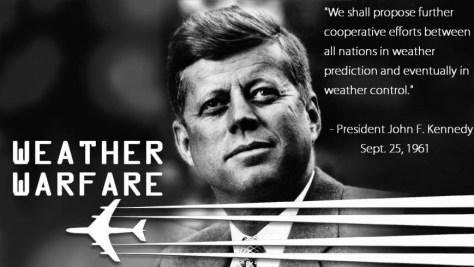 Although the production of the third documentary has been delayed, we now have the fundamental answer as to “WHO In The World Is Spraying”.

Without addressing the specific issue of chemtrails, this brilliant documentary reveals the “WHO” by examining the JFK assassination, financing of Nazi Germany, the 9/11 coverup – and how the CIA, Mafia, Central Banksters and Bush Crime Family have worked together over the decades to gain control of the US Congress, federal agencies, Corporate Media and the Department of Defense.

At 3 1/2 hours, this is a long but compelling documentary.   Like a good book – you my find it difficult to put down.  As an introduction, a 2 minute trailer is provided.

Answering the deep question of “WHO” –  this documentary offers a new perspective on “HOW” Chemtrails are sprayed from military jets and “WHY” commercial airlines have increasingly been enlisted to participate in spraying the skies over global populations with no end in sight.

The public is becoming aware that the weather and climate as the new opportunity for control by organized crime in it’s many manifestations.

The ominous takeaway from this documentary is that the brutal power and stupid criminal activity that allowed the assassination of JFK is now controlling the natural resources and climate of planet earth.

No-one Ever Gets to Vote Against the Rich

Journalist, Gillian Granum proposes a manifesto for the American people:

“to withdraw completely any mandate to rule from the British and American establishment.” (Continue)