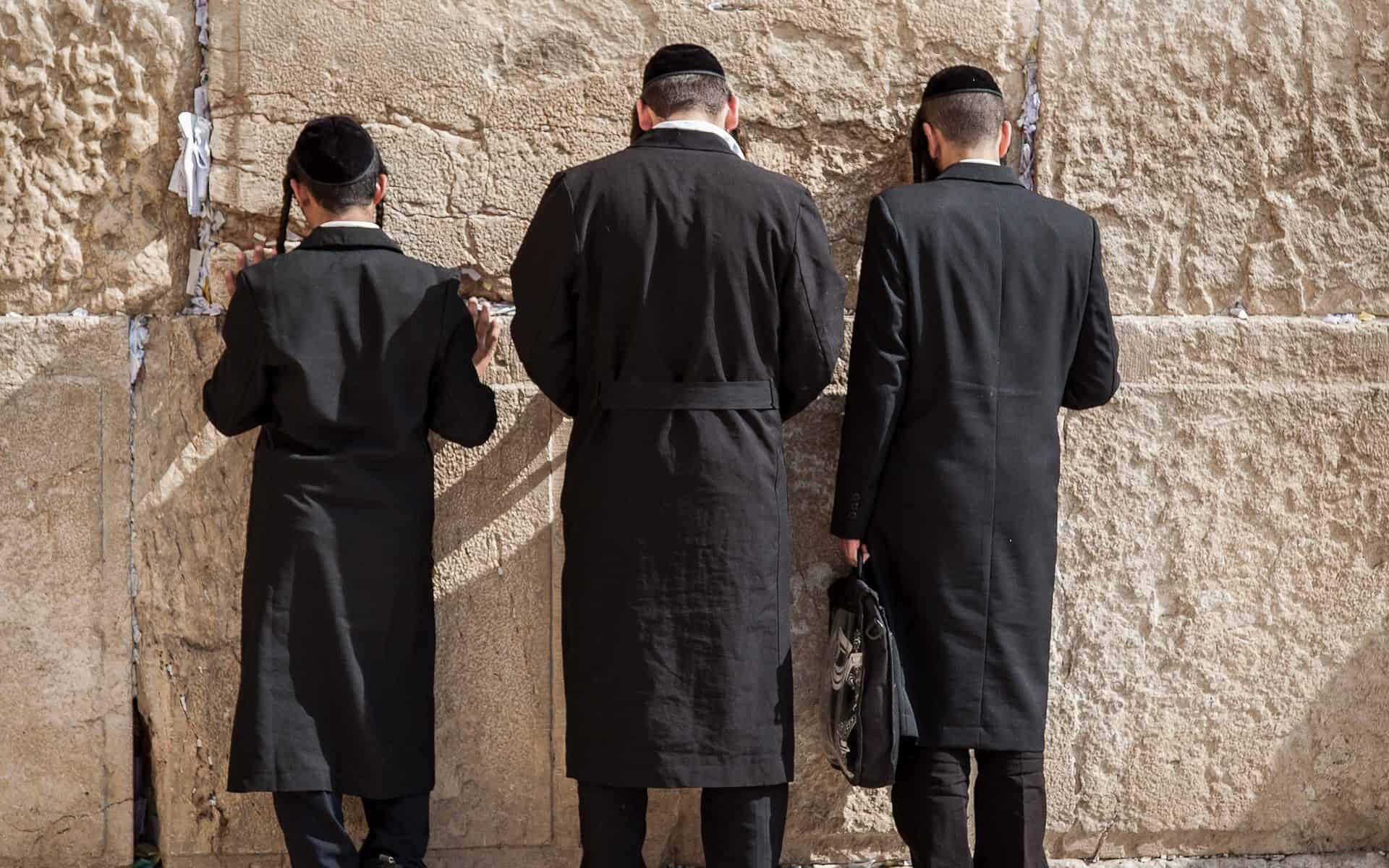 In the practice known as Davening, the Jews copulate with the feminine aspect of “god” while praying. Rabbi Schochet and HaRivash of San Diego Jewish World write that,

“Hassidic literature teaches that one of the reasons given for Hassidim swaying in prayer is based upon the analogy of the movement that occurs in the act of love making.

The Baal Shem Tov is purported to have taught:

Prayer is zivug (coupling) with the Shechinah.’

Thereafter one can stand still, without motion, attached to the Shechinah with great deveikut (“cleaving to God)

As a result of your swaying, you can attain great bestirment. For you think to yourself: “Why do I move myself? Presumably it is because the Shechinah surely stands before me.” This will effect in you a state of great hitlahavut (enthusiasm; rapture). (Jacob I. Schochet, Tzavat HaRivash Brooklyn, NY: Kehot Publication, 1998, pp.54-55.) (http://www.sdjewishworld.com/…/davening-at-victorias-secret/)

“A favorite ploy of the talmudic jews is to have a religious leader or politician go to the Kotel (aka Western Wall or Wailing Wall) and pay homage to their man made rabbinical religion. It is an outward public profession of submission to the pharisaical faith for the whole world to see. Benedict XVI and the new saint John Paul II both went to the Wailing Wall to demonstrate their faith not in Catholicism but modern day Judaism…John Paul II set the precedent on 26 March 2000 by being the first to visit the Western Wall and place a prayer there. As Benedict XVI continued this sacrilegious and apostate practice, on 12 May 2009, nothing less is expected from Francis. There was much hemming and hawing by the Talmudists before John Paul II and Benedict XVI were allowed to go to the Wailing Wall and place their prayers in the magic stones.” (http://callmejorgebergoglio.blogspot.com/…/francis-shekinah…)

So as you can see, its just not Jews who go to this wall and pray. It is presidents., heads of states and popes. And why would non Jews do this? Because they worship the same god…Lucifer. This part of the wall was never a part of the Temple. This was the wall for the Antonia Fortress that not only held the the judgement seat for Rome but also had a temple of both Jupiter and Venus on it (https://www.google.com/…/exploring-aelia-capitolina-ha…/amp/).

Rabbi Luria also allegedly talked to and had visions of Elijah. We know this wasn’t actually Elijah, so what demonic spirit is manifesting to these Kabballists rabbis?

“Rabbi Isaac ben Solomon Luria Ashkenazi (aka Ha’ARI) was a 16th century Kabbalistic rabbi who claimed to have conversations with Elias (Elijah) from the Old Testament.

Many of his teachings went against and were contrary to earlier rabbinical teachings. We are digressing.

The reason Jews pray at the Western Wall is because Rabbi Luria told his followers that this site, which Christians were using at the time as a dump, was where the Temple had been located.

The reasoning Rabbi Luria gave behind this, is the Christians are the enemies of the Jews so they are defiling a Jewish holy place.

He further told them the Shekinah emanates from the wall. For those who don’t know about Judaism, the Shekinah is the female aspect of God.

It suffices to say when God was in his original form he was a hermaphrodite and it is the Jews responsibility to reunite the Shekinah with the masculine Godhead the details of this are laid out in the Zohar a kabbalistic book.

When at the wall the Talmudists daven.

Davening is a ritualistic form of chasidic jewish prayer which involves using the whole body. If you have seen a Jew rocking back and forth you dear reader have seen one davening.

Rabbi Luria and later Hasidic Kabbalists taught in proper davening one is copulating with the Shekinah.” (http://callmejorgebergoglio.blogspot.com/…/francis-shekinah…)

What kind of prayers do these people say while copulating with this feminine presence? Scriptures from the Bible? No, they come from the Talmud.

These prayers, often with instructions and commentary, are found in the siddur, the traditional Jewish prayer book. However, if the Talmud mentions tefillah, it refers to the Shemoneh Esreh only.” (https://en.m.wikipedia.org/wiki/Jewish_prayer)

“The Amidah (Hebrew: תפילת העמידה‎, Tefilat HaAmidah, “The Standing Prayer”), also called the Shmoneh Esreh (שמנה עשרה‎, “The Eighteen”, in reference to the original number of constituent blessings: there are now nineteen), is the central prayer of the Jewish liturgy.

This prayer, among others, is found in the siddur, the traditional Jewish prayer book…

Observant Jews recite the Amidah at each of three prayer services in a typical weekday: morning, afternoon, and evening…

The language of the Amidah most likely dates from the mishnaic period, both before and after the destruction of the Temple (70 CE) at which time it was considered unnecessary to prescribe its text and content.” (https://en.m.wikipedia.org/wiki/Amidah)

This ritual comes the Babylonian Talmud Era and are not holy prayers by any means.

And! In the true spirit of Roman Catholic “Indulgences” and bringing to mind Jesus overturning the temples in the Temple, if you can’t make it to the wall, you can pay a “righteous” person to pray for you for between $2 to $18 a day. Or you can pay $3,600 for the “Choice Prayers” package~! If you think I’m making this up you can see for yourself what they offer at the Kotel: (https://westernwallprayers.org/aboutwwp/whatwedo.html).

The wailing wall is a demonic place where Jews and non-Jews copulate spiritually with a feminine presence and some even make a profit over it. Much like a divine prostitute, the presence encountered in this act is in fact Sophia, the feminine aspect of Lucifer.