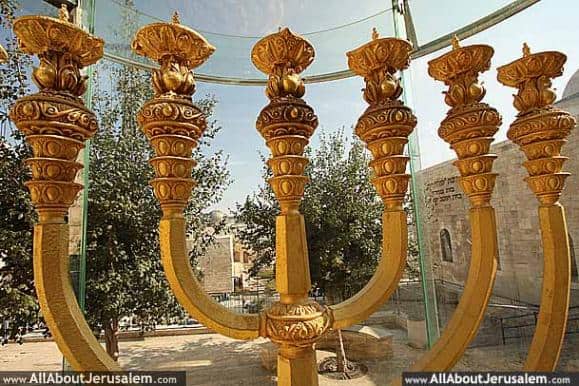 A large full-sized Menorah candelabra, designed to burn olive oil – weighing half a tonne, covered in 92 Lbs of pure gold, and worth $2 million sits in a glass case overlooking the Western Wall. It awaits placement in the Third Temple to be built on
the site of the Dome of the Rock.

After a recent visit to the Temple Institute in Jerusalem,
Steve Thomas wonders if Jewish prophesies of world government aren’t already being realized.

Earlier this month I visited the TEMPLE INSTITUTE, in the Old City of Jerusalem, in the Jewish Quarter.

We were given a guided tour and shown priestly robes for the ‘kohanim’ (priests) and a collection of replica temple vessels that have been recreated in preparation for a newly rebuilt Jerusalem Temple. They have collected a considerable amount of gold to fund the operation. They said they expect God to divinely remove the Dome of the Rock by earthquake or war in order to clear the ground.

The following implements (or images of them) were on display, made from the correct wood and metal, overlaid with gold in many instances:
a showbread table and  various trumpets, bowls, breastplates and sacrifice offering implements for the replica ‘Holy of Holies’ and altar.

We were told that a Jewish man, alive today, born of the Davidic lineage, Torah observant, will be presented as the Messiah of Israel and the world. He will be identified by his victorious intervention in war on their behalf, leading Israel to military victory – either by his priestly intervention, or actual involvement – they seemed a little vague on this.

I asked what the general vision was for the nation of Israel under their anticipated Messiah.

I was told that Israel will be awakened to the Messiah by a reappearance, or mystical intervention (?) of Elijah in some form, identifying him as a son of David. Then the nation will come into it’s promised inheritance, and rule the nations from Zion. That the Gentile nations will not be obliged to keep full Torah, but obedience to the Seven Noahide Laws would be required of non-Jewish people. Here the Chabad organization proclaim this doctrine. They believe that people of other religions will move to “monotheism”  and be therefore able to accept “Universal Jewish Morality” as an overarching global law. 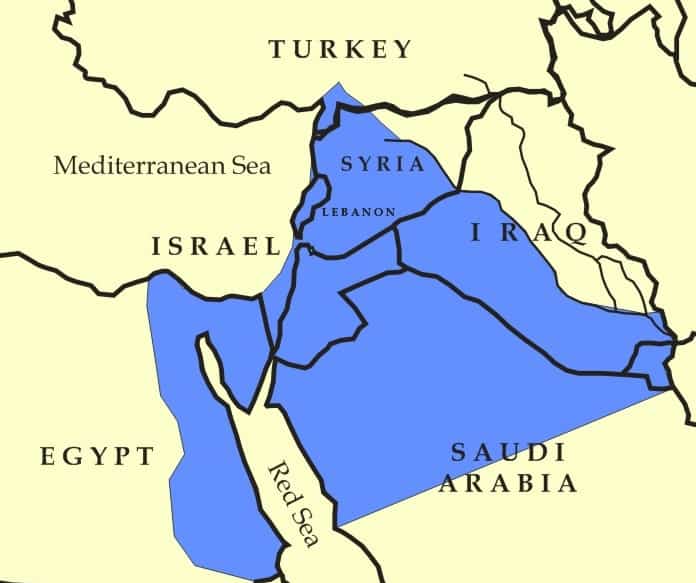 This morning this came through my FB newsfeed,projectinG the future boundaries of national Jewish Israel

Evidently, the land, presently under the territorial sovereign control of various surrounding nations, would need to be acquired by Israel in the near future to make this possible – namely, significant parts of:  Turkey, Syria, Iraq, Saudi Arabia, Jordan. Lebanon, Egypt, and Palestinian territories. Interestingly, these are the very locations where trouble and strife are presently erupting.

I was personally emailed by a Jewish pioneering researcher recently, who tipped me off about the ‘Oded Yinon’ plan – he believes this informs present Israeli policy at the highest levels. I have no idea if this is true or not, but read it anyway, to be at least aware of its existence. I was intrigued to read that these very locations mentioned above are being (it is claimed) intentionally divided, to break up the sovereign national contiguity of those countries:

I am beginning to ask whether or not this utopian plan for Israel, being purposefully planned, prayed for, funded, and implemented by Israeli and American orthodox Jewish organizations, based in Old Jerusalem, protected by Israeli soldiers and Knesset-ordained privilege, projecting a global spiritual regime under the auspices of a Jewish Messiah….. Is this the preparation for the final manifestation of antichrist? For Jesus is surely not the Messiah in view….

Is this Jewish kingdom, intended to be something like what Christian Zionists are projecting as a MILLENNIAL KINGDOM – a kind of thousand year Third Reich or empire, (the First being under David & Solomon in the monarchy, the second following Nehemiah and Zerubbabel, under the Maccabees ending in AD70 – followed by today’s cries from Masada, as Israeli troops are sworn in, of NEVER AGAIN!)

This is inevitably a controversial line of questioning. Is Christian Zionism being naively drawn into this projection, by the deception of doctrines of devils – false brethren crept in unawares – what the New Testament refers to as Judaizers (Galatians 2:14) drawing the saints back under the redundant terms of the Old Covenant – building again that which YHWH himself has destroyed?!