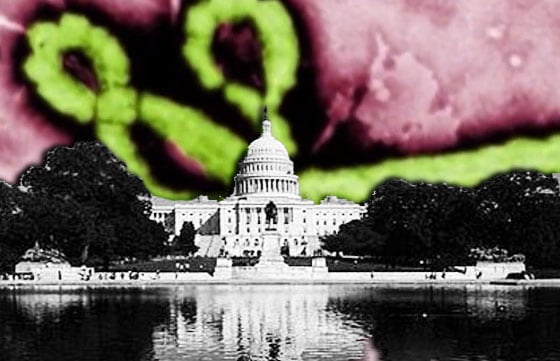 The Obama Administration has simultaneously endeavored to minimize the significance of the threat posed by the ebola virus and avoid taking responsible steps to reduce the spread of the deadly virus. That obfuscation and inaction has placed the American people at greater risk of the lethal contagion. It is further evidence that this Commander-in-Chief fails to lead and leads from behind which is not to lead at all. His present failures mean that we are likely to see more cases of ebola in the United States with the real potential that there may be regional outbreaks with consequences as dire as those now plaguing Guinea, Liberia, and Sierra Leone.

In 1976, scientists discovered the ebola virus. Its origins are the subject of debate, but many think that it started in monkeys or bats and then entered the human species through contact with those animals’ body fluids. Some 70% to 80% of those who contract the virus will die from it. The time interval between infection and the onset of symptoms is between a few and 20 or more days with the average interval consisting of 8 to 21 days. The symptoms are in many respects not unlike a bad case of the flu, that is, until hemorrhagic fever becomes evident with bleeding from orifices. The symptoms include a fever greater than 101.5 degrees Farenheit, severe headache, muscle pain, weakness, diarrhea, vomiting, abdominal pain, and unexplained hemorrhage (bleeding and bruising).

Dr. Charles B. Simone is one of the world’s greatest oncologists and immunologists. He is a science advisor to my law firm, Emord & Associates. Dr. Simone has explained that the statements made by Dr. Tom Frieden of the Centers for Disease Control and Prevention to the public have downplayed the risks associated with infected persons and communal forms of travel, like air travel. Dr. Frieden has said that “there is zero risk of transmission of ebola on air flight” and that the disease “does not spread from someone who doesn’t have fever or other symptoms.” That, Dr. Simone says, “is not exactly true.”

Dr. Simone explains that “these viruses [referring to ebola and another similar hemorrhagic fever, Lassa] . . . have long incubation periods, making infected passengers potentially symptom free and unaware that they are infected at the time of travel even though they can spread disease by droplet transmission.” Dr. Simone notes that an infected person “spreads ebola virus containing droplets when they cough, sneeze or speak and that the droplets” are “propelled up to 3 feet and deposited on a susceptible host’s eyes or mucus membrane.”

It is therefore clear that all forms of communal travel by air, sea, and land in which infected persons are present or are probably present pose a lethal threat to those not infected. With that information available to this Administration months and months ago, the countries of outbreak (Guinea, Liberia, and Sierra Leone)should have been subjected to quarantine. We should have refused to allow individuals from those countries into the United States whether for a temporary visit or permanent residence until the outbreak condition has ended or until testing establishes the specific person seeking entry to be ebola free. We should have likewise taken immediate steps to deny entry into the United States of anyone who endeavors to enter from any other country if the person or persons has visited Guinea, Liberia, and Sierra Leone unless that person has been tested and proven ebola free.

The failure to undertake those minimally responsible measures months ago means that, for all we know, individuals with the disease have come to the United States and have infected others with the results of that infection going either undetected or misdiagnosed. The continuing failure to take stringent measures to block individuals with the disease from coming to the United States means that the nation remains at an unacceptably high risk of transmission. The problem is compounded by the Obama Administration’s dispatch of 3,000 American soldiers to the areas where the ebola outbreak is most severe, rather than to continue provision of humanitarian aid without an American presence on the ground. It is foreseeable that we will experience more instances of diagnosed ebola cases in the United States because of this Administration’s failure to undertake reasonable and complete protective measures. We may also count on infection coming from our southern border, which remains an essentially open zone for entry without lawful admittance. Conscious acts of infection, turning individuals into weapons of biological terror, is also not out of the question and may yet occur, encouraged by this Administration’s failure to make complete and thorough obliteration of ISIS, Corazon, and others dedicated to our destruction an immediate priority without limit on use of means to accomplish that objective.

In the end the spread of ebola is attributable not only to the fact that the disease is communicable but also to the fact that those who can stop its spread in the federal government remain without any comprehensive and effective approach to police America’s borders and stop those with the virus from coming here. To view that failure to protect the nation with alarm is not uninformed extremism, it is common sense.

We ought to be alarmed and we ought to demand overdue government action to block immigration from Guinea, Libera, and Sierra Leone to the United States. We ought to require testing of all individuals who have been to those countries to prove that they are ebola free before they are allowed to come to the United States. Finally, we cannot hope to protect the nation from this and other contagions in countries abroad unless we gain control over our borders, block illegal entry, and reconstruct immigration laws to make legal entryfrom other countries a sane and reasonable process for those whose skills, law abiding status, health and financial ability make them assets for our country.