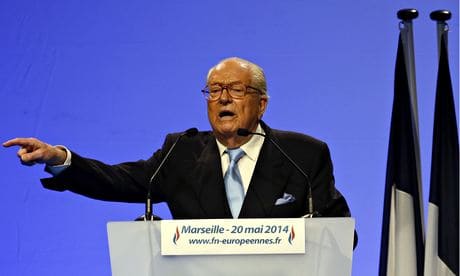 The Guardian
Jean-Marie Le Pen, 85, is standing as an MEP for Marseille, south-east France, in this week’s European parliament elections. Photograph: Jean-Paul Pelissier/Reuters

At a cocktail party before an election rally in Marseille on Tuesday evening, days before the European elections in which the FN is leading the polls in France, Le Pen spoke of the “demographic explosion” in the world.

“Monseigneur Ebola could sort that out in three months,” he said in front of journalists.

“In our country and in all Europe, we have known a cataclysmic phenomenon – a migratory invasion that, my friends, we are seeing only the beginning of today.”

Le Pen, who is standing as MEP for the south-east seat, added: “This massive immigration risks producing a real replacement of populations if we don’t arrive in power soon enough to put an end to the politics of decadence that has been followed for decades.”

S.peaking in Marseille, which elected an FN mayor in one of its districts in recent elections, Le Pen was followed on stage by his daughter, party president Marine.

Once again, her father undermined her campaign to convince voters the FN has evolved from its days as a vehicle for the extreme right and Nazi apologists.

Taking the microphone, Marine Le Pen continued with the twin pillars of the party’s manifesto: the anti-immigration and anti-Europe.

“That’s enough. We wish to become masters in our own home once again,” she told the cheering audience.

She added that France was caught between “two steel jaws”, saying: “On one side we have the importing of foreign cultures by a wave of foreigners who, unlike those who came before wish to impose a change on our behaviour and our lives. On the other side, there are the European commissioners who force their crazy administration on every aspect of our daily lives.”

Opinion polls have suggested that the FN could score between 23% and 25% of the vote in France this Sunday, beating the opposition centre-right UMP party and the ruling Socialists.

Jean-Marie Le Pen has been accused and convicted several times of xenophobia and antisemitism. In February 2005 a court in Paris ruled that his remarks about Muslims in an interview with Le Monde constituted an incitement to racial hatred and he was fined €10,000 (£8,100) plus €5,000 in damages. The conviction and fines were upheld on appeal. In 1987 Le Pen said he supported the forced isolation of those infected with the HIV virus. In June 1996 he complained that the French World Cup football team contained too many non-white players.