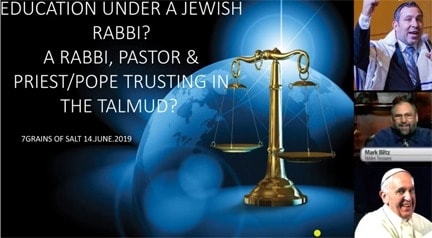 Building on the groundwork laid by Scofield/Zionist Dispensationalism, it all started in 1970 with Hal Lindsay’s book “The Late Great Planet Earth.” In His wisdom, God used Lindsay’s book to bring many people to Christ in spite of its false Dispensational “end times/rapture” message.

The 1980’s saw “Jews for Jesus” come onto the scene. I remember people celebrating the new Jewish converts, and don’t get me wrong, ANYBODY finding Jesus IS something to celebrate! But along with the excitement over the new converts came the belief that there was something special and different about these people because of their supposed deeper understanding of Jewish traditions and the Old Testament, the “roots” of our Christian faith. Well, that assumption was false because Jews today do not study the first 5 books of the Old Testament (Pentateuch/Torah) in Synagogue, they study the TALMUD; the oral teachings of the Rabbis, and the Talmud’s main source is the Zohar, which is mystical Babylonian Kabbalah. (I have several articles on that subject, and if you want to dig deeper you might pick up a copy of Deanne Loper’s book, Kabbalah Secrets Christians need to Know Deanne’s book is free on Kindle.) Rather than joining established Christian churches, the new “Jews for Jesus” created their own “Messianic” congregations that celebrated the Jewish feasts and observed Jewish holidays.

The 90’s brought Tim LaHaye and Jerry B. Jenkins’ “Left Behind” books, that more strongly ingrained the belief in a “rapture” of believers before “the great tribulation” got too bad.

Jonathan Cahn (Con) and the release of his book The Harbinger in 2011 served to further Judaize organized Christianity and introduced it to the concept of being taught by a “rabbi.” I remember people at my church being so excited about Cahn’s book, but when I tried to read it, it didn’t make any sense to me. Even though it came out before I’d seen through the lie of Dispensationalism, Cahn’s book didn’t align with scripture as I understood it and just seemed foreign (and boring) to me. Later, of course, I found out why. Cahn still visits Christian churches all across America peddling his Kabbalist Jewish mysticism.

From rabbi Cahn and rabbi Shapira to pastor Mark Biltz and others, these teachers are all over Youtube today leading Christians back under the law that Jesus died to free us from. God is opening the eyes of more and more of His people about the satanic infiltration of the organized church, but sadly, most are still asleep.

Here is a video by a new Youtuber, 7Grains of Salt, who is doing her part to get this information out.