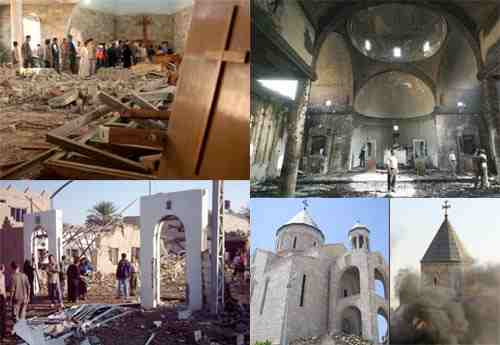 Mosul is the second largest city in Iraq and it was home to the largest remaining conclave of Christians in the country. Now nearly all of the tens of thousands of Christians in the city have left everything behind in order to flee the onslaught of the radical ISIS (Islamic State of Iraq) army which defeated the regular government forces on Tuesday.

Chaos reigns in the city as the radical Islamic forces assert their control and establish radical sharia law over those who remain. It is reported that they have taken over and closed down all of the churches. At this point there is no way to know how many lives have been taken but it is certain that a substantial number of Christians have been slaughtered in the process.

Here are a few quotes about the situation from the World Watch Monitor:

A mass exodus is underway from Iraq’s second largest city Mosul after its seizure by the ISIS, the Islamic State of Iraq and the Levant, an Iraq and Syria-based Sunni Muslim extremist group. …

ISIS wants to overthrow the Iraqi and Syrian Governments and establish a Sunni Muslim Caliphate in the Middle East. …

“When this goes on like this, Mosul soon will be emptied of Christians”, said World Watch Monitor’s source in Iraq, who will remain unnamed for security. “This could be the last migration of Christians from Mosul.”

And a few more from BosNewslife:

BAGHDAD, IRAQ (BosNewsLife)– Thousands of Christians and other residents began fleeing Mosul on Tuesday, May 10, after Islamic militants overran much of Iraq’s second largest city, “killing hundreds” while seizing churches and government buildings.
As many as 150,000 people were trying to escape Mosul amid appeals for prayers and warnings that this may be the last exodus of what was a Christian stronghold. “What we are living and what we have seen over the last two days is horrible and catastrophic,” Najeeb Michaeel, a Dominican priest, wrote from Mosul.

He confirmed that gunmen of the ‘Islamic State of Iraq and the Levant’ (ISIL), who are inspired by terror group al-Qaida, took over churches after pushing out security forces and capturing military vehicles. …

With attacks ongoing, Pastor Haitham Jazrawi suggested that the city of 1.8 million people will soon have no or very few Christians. “Ninety-nine percent of the Christians have left Mosul,” he explained in published remarks.  Across Iraq, the Christian population has decreased from as many as 1.5 million to maximum 400,000 people in the last decade.

Response: At one time Iraq was home to over a million and a half Christians. One of my greatest disappointments with the War in Iraq was the American and British policy not to protect the Christian community after the fall of Saddam Hussein while the country was under American and allied control. Over a million Christians ended up fleeing Iraq after Islamic radicals began to freely persecute the Christian community while American and British forces ignored it all. Supposedly trying to avoid the appearance and charge of being Christian ‘crusaders.’

Now the remaining 400,000 or so Christians are in danger as the radical ISIS continues to defeat the weak Iraqi government forces. Notice that there is not one statement coming from President Obama and his administration concerning the dire condition of Iraq and their army. Probably because they do not want to call attention to the fact that the Obama administration did not finish the task of training and supplying the Iraqi forces. Plus quite a few promises were probably broken in the process of quickly pulling our troops out of the country.

Now it looks like the radicals will prevail and the country will end up being an even greater threat to American security than the previous regime. So in all candor, the deaths of thousands of Americans and British forces will end up being a complete waste. Meanwhile, Iraqi Christians are in fear for their lives and the old regime of Saddam Hussein is looking good in comparison. At least the Christian community was protected by the old dictator. Don’t look for the Obama administration to help in any way.            *Top