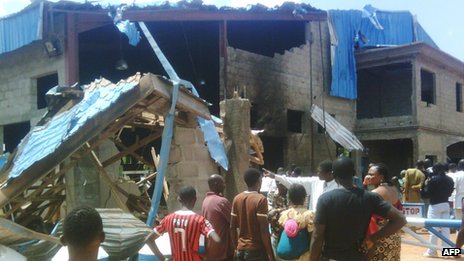 Where is the outrage over these events as our president coolly takes the perpetrators’ side, and American Pastor Rick Warren continues “builds his bridge” to the Muslim community?

The Obama administration tells us Boko Haram has “legitimate concerns.” Legitimate? Obama must be referring to Islamic law and jihad.

Nigeria: We’ve Lost 750 Churches to Boko Haram – PFN
By George Okojie and Benjamin Isaiah, All Africa, 14 June 2014(thanks to Religion of Peace)

The Pentecostal Fellowship of Nigeria, PFN, has said that no fewer than 750 churches have so far been burnt by the highly dreaded terrorist sect known as Boko Haram.

The religious organization, which lamented the loss after its emergency National Advisory Council meeting at Ajao Estate in Lagos, called on the federal government to compensate the families of those killed by the insurgents.

PFN national president Rev. Felix Omobude, who spoke on behalf of the body, said the church has been a major victim of the horrendous terrorist attacks in Nigeria.

The PFN boss said, “We have lost at least 750 churches in the north to attacks by terrorists. Our worry of late is that churches that are making efforts to rebuild are facing difficulty in that part of the country to secure necessary permits.

“We do not want to believe that there is deliberate effort to discriminate against the church, even though churches in the North have, over the years, experienced difficulty with obtaining necessary approvals for their buildings.”

Omobude solicited for express approval of the applications by churches to rebuild their places of worship and schools for the sake of fairness and equity.

He emphasized that there was the need for government to compensate the families of those killed by Boko Haram as many of them were currently going through harrowing experiences.

Harping on the 2015 elections, the clergyman urged political leaders to restrain themselves and shift their focus beyond the selfish interest of winning elections to assume mantle of leadership of the country.

The PFN president also condemned the abduction of female students in Chibok and demanded their immediate release.

“We call on the federal and state governments to increase their level of cooperation as it is a battle that can only be won when we are all united. We salute the courage of the Nigerian Army and enjoin them to rededicate themselves to this cause and expedite action in ensuring the safe return of the girls.

“We challenge them to continue to stand as one, maintain unity of purpose and ensure that proper chain of command is maintained at all times. We have faith in their capacity and dedication to safeguarding the sovereignty and territorial integrity of Nigeria,” Omobude said.