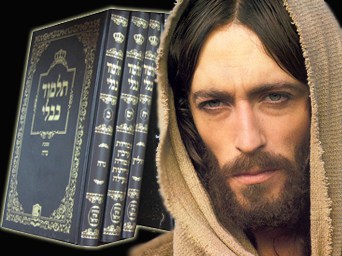 When Christians think of the Jewish religion, we think mostly about the Mosaic Law or the Pentateuch, the Torah which is sacred to Christianity. We consider the Mosaic law to have been a “shadow” of things to come, which were fulfilled through the gospel by Jesus Christ. In that way there is congruity between the Old and New Testament. Most Christians see Judaism as the Jews who are still practicing the Old Covenant Laws. In church we’ve been taught that the Jews just ‘missed Jesus’.

“For the law having a shadow of good things to come, and not the very image of the things, can never with those sacrifices which they offered year by year continually make the comers thereunto perfect.“ Hebrews 10:1

“Which are a shadow of things to come; but the body is of Christ.” Colossians 2:17

In reality, however, although some Jews are still faithful to the Torah, the majority of practicing Jews abandoned it long ago in favor of the Talmud and most Jews today are actually agnostic.

How did the Talmud come about and how does it relate to the Old Testament Law given by God to the descendants of Abraham? I’d heard that the Talmud had occult influences, but how did these teachings as well as the Zohar work their way into Judaism?  I wanted to gain a better understanding of all of this and what the agenda was behind the big money being invested in Jonathan Cahn’s Harbinger/Shemitah con.

Many have seen the video, “The Zohar Speaks” (Jonathan Cahn exposed); featuring Jonathan Cahn teaching out of the Zohar, the foundational Jewish work, more popularly known as the Kabbalah4. Most Christians are unfamiliar with these writings and are unclear as to their role in the modern Judaic religion. And no wonder. While Christian apologetics sites tell us truthfully enough that the Kabbalah is occult mysticism, once again, here we run into the 99%/1% mixture of truth and disinformation. This truth is mixed with the illusory term “Judaeo-Christianity”. Take for example this quote by Elliott Miller on CRI:

“Kabbalah is still essentially an occultic system, and thus must be classified among all other occultic systems as being incompatible with the historic Judaeo-Christian faiths.8”

The term “Judaeo-Christian” alludes to a congruity between modern Judaism and Christianity which does not exist since the two religions are not based on the same books.

The Talmud is a collection of commentaries on the Law compiled by Pharisees and Rabbis between the second and fifth century A.D. Quite in contrast to the Old Testament, which supports Christianity, and is its’ very historical and prophetic foundation, the Talmud literally nullifies the Bible. A person cannot be both a Christian and an observer of the Talmud.

The Jewish Scribes claim that the Talmud is partly a collection of traditions (doctrines) Moses gave them in oral form that had not yet been written down in Jesus’ time. Jesus condemned the doctrines of the Scribes and Pharisees.

“But in vain they do worship me, teaching for doctrines the commandments of men.” Matthew 15:9

The Sadducees had worked for centuries to protect Judaism from doctrine and legalism but with the fall of Jerusalem in AD 70, the Pharisees began adding multiple commentaries upon the Law to the point where doctrine, (the Mishna) became essential. Through the generations the Mishna grew until the volumes became unmanageable to the point where yet more even more doctrine was necessary. Towards the fifth century AD a Mishna code was formed in Palestine and at the end of the same century a second code at Babylon. Both codes were called “Talmud” (which means “research” or “investigation”), Babylonian Talmud remained “The Book’ for Orthodox Jews. It replaced the Torah as the fountain of all wisdom and the guide in every detail of daily life.11

“The Talmud, despite its character as a commentary upon a commentary upon a Law of uncertain origin, has not only preserved the Jewish Nation but has imbued it with a Pharisee spirit and separated it, perhaps forever, from the main stream of human culture.” – British Journalist H.W.Steed

“Modern day Jewish Orthodoxy, then, is not the religion of the Bible and the prophets. It is a post-biblical Talmudic religion built up by the Pharisees and doctors of the Law between the second and fifth centuries to preserve the small minority of Jews who had not followed Christ, and to consummate the definite break from triumphant Christianity.” –  Le Malheur d’Israel, Dr A.Roudinesco

It’s important to note that with the substitution the Talmud for the Torah, Jewish religious exclusiveness greatly increased.

“Having rejected the Gospel, the rabbis were obliged to re-interpret the text of the old Bible. They carried out this work by means of oral traditions more or less consistent with the old texts; the Mishna and the Gamara. The result of this compilation was a new Bible; the old remains with the Christians. The Talmud is composed of eleven thick volumes. This baneful book, for the most part unintelligible, a sad wreck of the Judaism of the prophets, does not enrich the human spirit.” Dr. A. Roudinesco, ibid., pp. 25-26

Virtually every synagogue in the world contains the Talmud and Zohar, with the possible exceptions of some secular Jewish congregations. While the Talmud is the most read and applied, these are the two pieces of literature that are the most universally read by observant Jews, greatly surpassing the Old Testament/Torah.

If today’s Jews are Talmud observers and are not following the true religion given to them by God, what are we to conclude about Zionism, the modern state of Israel and the recent surge of Christians intent on going back to their “Hebrew Roots”? Is there room for Christians in the Jewish religion? The Talmud answers this question for us very clearly. Talmud Jewish doctrine not only considers itself to be exclusive, but it actually holds Jesus and his followers in contempt.

To cite every blasphemous thing written against the son of God in the Talmud would take many pages. But to think that modern Judaism can be in harmony with Christianity is to be completely ignorant to what the Talmud teaches. Is it any wonder that it is so difficult to find copies of the Talmud to examine? While it is easy to find the Bible or Koran in your local library, you will not find the Talmud. While the largest libraries in a state might contain the Talmud and Zohar, you will rarely find them anywhere except in synagogues. This is because Judaism teaches that the law they contain was given to Jews alone and it’s wrong for Gentiles to read it. The Talmud says, “The goy who pries into the law is worthy of death.” 6

“Hence the Talmud prohibited the teaching to a Gentile of the Torah [Talmud and Zohar] “the inheritance of the congregation of Jacob…” R. Johanan says of one so teaching, “Such a person deserves death.”—Sanh. 59a, Hagigah.”  – Jewish Encyclopedia7

“The Talmud is to this day the circulating heart’s blood of the Jewish religion. Whatever laws, customs, ceremonies we observe—whether we are Orthodox, Conservative, Reform or merely spasmodic sentimentalists—we follow the Talmud. It is our common law.” 5

Additionally, Jewish leaders will not tolerate Christian Seminaries and scholars publishing any research into the Talmud’s real teachings about Christ, Christianity, and Gentiles. Christian schools and scholars comply for fear of being labeled as “anti-Semites’.

Rev. Ted Pike relates his experience at the Library of Congress while doing research for his book:

“In the early ’80s, as part of research for my book, Israel: Our Duty, Our Dilemma, I visited the Judaic section of the Library of Congress in Washington, D.C. to study various versions of the Zohar, or Kabbalah.

On my first visit, I asked the Jewish librarian where to find the Soncino English translation. He became disturbed and replied, “I don’t think you want to read that. You might misunderstand it.” I couldn’t believe my ears. I’m afraid I showed my anger. He relented.”

What is presented here is not even a ‘tip of the iceberg’ of information which implicates a conspiracy that goes far deeper than the average believer is willing to consider. It requires a complete discarding of what we’ve been taught from the time we were children about Israel and the Jewish people. It is a very unpopular topic thanks to the stigmas, not only of being labeled a “conspiracy theorist,” but an “anti-Semite” as well. But know that both of these terms were deliberately designed by the Cabal to snuff out critical thought and quiet those who ask questions. They’ve been studying the human psyche for a long time and they are experts at manipulating public opinion.

In giving way to the pressure put out by these contrived labels instead of using our God-given minds to seek out the truth, we are seeking the approval of man.

“For do I now persuade men, or God? or do I seek to please men? for if I yet pleased men, I should not be the servant of Christ.” Galatians 1:10

So what is the agenda with Jonathan Cahn and the many other Zionists leading Christians into “Judaeo-Christianity” even so far as to abandoning God’s beautiful New Covenant through Jesus to return to Law keeping? This is precisely what the New World Order is all about, namely; bringing all nations under one government (ruled from Israel by the anti-Christ), and one religion, (the worship of the same).

The Hebrew Roots Movement is not simply a new cult that has slipped into the church. It is the One World Government/religion being formed before our eyes as believers (goyim) learn to “love their servitude” to the Zionist false Messiah.

I was recently taken aback when someone from the Hebrew Roots movement announced to me that “Christians are not God’s elect. The Jews are!” She went on to tell me that in the millennium we would be allowed to come to the holy city of Jerusalem but only the Jews would be allowed to live within its’ walls. This comment betrays the Zionist agenda of a one world government ruled by the “Jews” (synagogue of satan Rev 3:99), and reveals the elitist/exclusive attitude of the Talmud’s teaching. The Hebrew Roots Movement is not simply a new cult that has slipped into the church. It is the One World Government/religion being formed before our eyes as believers (goyim) learn to “love their servitude” to the Zionist false Messiah.

I encourage you, before giving into the temptation to return to your comfort zone and file this away into cognitive dissonance, first to  pray and look into this for yourself while we still have an open, free internet.

5. From a Nov. 19, 1959 installment of This is my God, serialized in The New York Herald-Tribune under “The Talmud: The Heart’s Blood of the Jewish Faith.”

6.  Abodah Zarah 26b, Tosephoth. Although this inflammatory dictum was omitted from the Soncino translation of the Talmud, the Jewish Encyclopedia in its article on “Gentiles,” p. 617, confirms its existence in the original.

8. What is Kabbalah? CRI

10. A Brave New World – Aldous Huxley ““A really efficient totalitarian state would be one in which the all-powerful executive of political bosses and their army of managers control a population of slaves who do not have to be coerced, because they love their servitude.”

12. Babylonian Talmud, Tractate Sanhedrin 105a Soncino 1961 Edition, page 717 – “GEMARA. … He practised enchantment by means of his membrum.” (“membrum” is used in many other passages to indicate the penis)