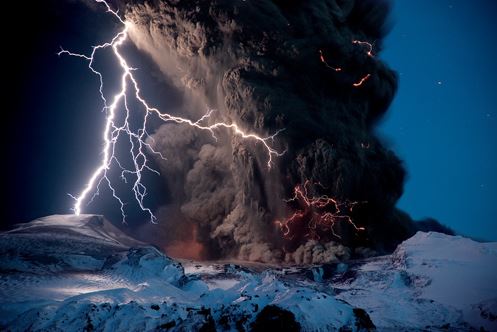 … since it’s gotten about zero coverage (it gets almost no hits on Google News)….

Oh, did I bury the lede that a globally-super-dangerous volcano might be getting ready to go off? Um, yeah, you might want to watch this one just in case…

The winter of 1783-1784. The Revolutionary War had just ended, and Benjamin Franklin was puzzling over the nation’s bizarre weather. Congress had been delayed getting to Annapolis to vote for the Treaty of Paris because the Chesapeake Bay just wouldn’t melt. The Mississippi River froze down to New Orleans, and ice was reported floating in the Gulf of Mexico. Reports from Europe were of a bizarrely hot summer with thick fog that was choking people to death in Scotland, massive hailstones, lightning, and crop failures. The sun was blood-red at noon. Mass starvation that would ultimately kill 1/6ths of Egypt’s population took hold due to a historic drought of the Nile. As many as six million people would die from the bizarre weather.

Franklin was one of the few scientists of the era to (almost) correctly speculate as to its cause:

“The cause of this universal fog is not yet ascertained […] or whether it was the vast quantity of smoke, long continuing, to issue during the summer from Hekla in Iceland, and that other volcano which arose out of the sea near that island, which smoke might be spread by various winds, over the northern part of the world, is yet uncertain.”

He, however, had mixed up his Icelandic volcanoes, for it was not Hekla that erupted that year, causing the planet-altering weather, but Laki (Eldgjá). A rift 23 kilometers long opened up in places up to 100 meters wide with lava fountains at times reaching over a kilometers into the air – and it continued erupting for 8 months. 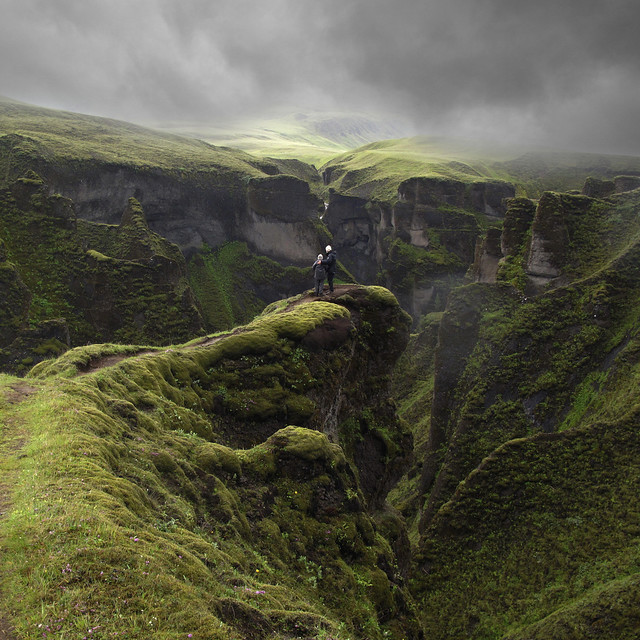 (Above: The fissure of Laki, the deadliest volcano in recorded history.)

The total quantity of lava erupted – 14 cubic kilometers – was not that much more than Mount Pinatubo (largest eruption of the 20th century)’s 10 cubic kilometers. But the eruption kicked out a staggering 120 million tons of sulfur dioxide, compared to Pinatubo’s 17 million – nearly supervolcano levels. Also unusually, Laki emitted 8 million tons of hydrogen fluoride – normally a trace volcanic gas. These gasses created the “Laki Haze” across Europe. In Iceland, the consequences were most severe – a quarter of the population starved or died of fluoride poisoning, and most of the livestock died. Denmark considered evacuating the entire island.

Is Laki threatening to go off? No. Then why do I mention him?

Because his big sister IS threatening to go off.

Bárðarbunga (BOWR-thar-Boon-kah, “Bárður’s Bulge”) is part of the same volcanic system, but is much larger than Laki. Barðárbunga stretches out over 200 kilometers long. It has a large eruption every 250-600 years. One of its eruptions before settlers arrived was 21-30 cubic kilometers of lava. Like her little brother Laki, she’s associated with massive amounts of toxic gas release. 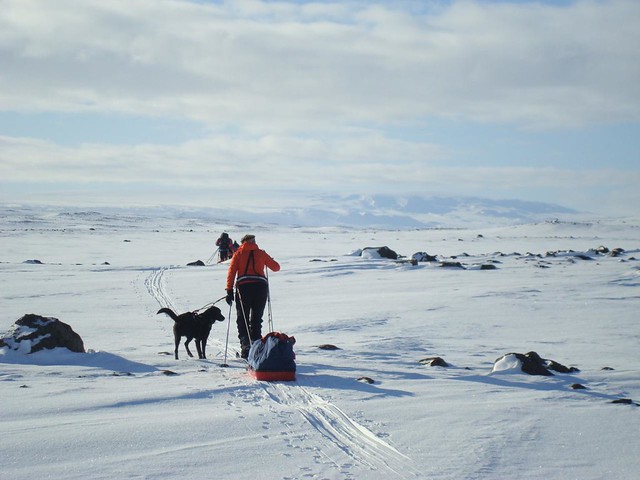 (Above: Bárðarbunga, beneath the thick ice sheet of Vatnajökull)

Now, okay – that’s what volcanoes do. Far more often than actually going off, they come to life, have a few earthquakes due to shifts not related to the magma, then die down. It’s nothing to be concerned about.

Except that’s not happening here. This is magma on the move. (note: the Icelandic press normally takes a rather reassuring tone in response to activity in volcanoes, they’re not big on hyping things when there’s nothing serious at hand) (translation mine)

Could Be A Precursor To An Eruption”It’s clear that this is not exclusively some kind of shifting going on. There is something more at hand, that which we call magma movement which is deeper than 5-10 kilometers. Whether it stops or keeps going will eventually become clear.”

This is according to Ari Trausti Guðmundsson, a seismologist interviewed by mbl.is concerning the earthquake storm which has been in progress in Bárðarbunga on the northern side of Vatnajökull since last night. A hundred quakes have been measured since the storm began and the biggest has been around magnitude 3 according to data from the Weather Office. The national police have described a state of uncertainty concering the earthquakes according to conversations with the police in Húsavík and Hvolsvellur

Ari points out that there have often ghappened that there’s an influx up to the surface of the volcano and earthquake activity has occurred several years before an eruption happens – for example, in the case of Eyjafjallajökull. “Thus this could be something similar. But on the other hand there’s the possibility that it makes it all the way up”, he says. He says the center of the quakes is not the middle of the volcanic system, rather east and northeast of its caldera which is under the ice. If it would erupt there then there would be an ash eruption under Dyngjujökull (glacier). But if it would be a little to northeast then it would be under Dyngjuháls. He says that it’s quite possible that an eruption could come although it’s not possible to know with certainty at this stage.

“If it becomes imminent, and especially if there are bigger quakes, then then that would be a precursor to an eruption and it would be just a matter of hours. Or even the beginning of an eruption,” adds Ari Trausti. For example if the earthquakes would be around 4 to 4,5.

Again – we don’t know what it’s going to do, only that there’s magma on the move right now in an exceedingly dangerous volcano. Of course, it would have the most effect here in Iceland, especially if it erupts under a glacier. That causes something called a jökulhlaup, a scientific term taken from the Icelandic word for it (literally “Glacier Run”). Depending on where it erupts, it could discharge water north, west, or both. West would sent it down rivers where the majority of our hydroelectric power plants are (hydroelectricity provides 75% of our power). 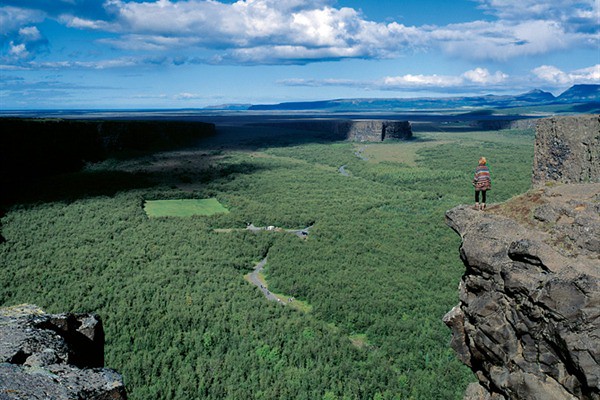 (Above: Ásbyrgi, carved out in a matter of days by floods moving at a flow rate several times higher than the flood stage of the Amazon River)

This is not an Eyjafjallajökull. Eyjafjallajökull was tiny. Bárðarbunga is a monster. And this is not a normal earthquake swarm. The quantity, scale, and depth of them have never been observed there before by modern equipment on this volcano, and are similar to what was observed in nearby Grímsvötn shortly before it went off. That said:

1) The magma may well stop moving and the quakes die down. Let’s hope so!   🙂
2) Even if it erupts, huge volcanoes more often give smaller eruptions than their largest ones (although it’d still be a major event).

So let’s hope for the best and not worry too much. But this is something people should keep an eye on – even if you don’t live in Iceland!

Update: a helicopter has been dispatched 3 hours ago to investigate the surface condition and deploy an additional seismometer and a webcam. Trails that pass near the volcano have been closed. Municipalities are going over their disaster plans. 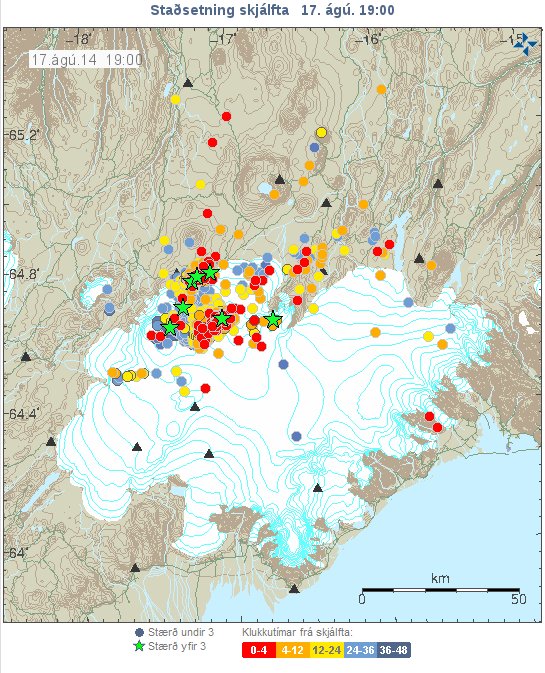 Update 3 (11:00 Iceland time, 18 august): The earthquake storm has continued unabated all night, with many hundreds of measured quakes since midnight including the largest one yet, a 3.8, and the magma is still considered to be on the move. Seismologists are holding a meeting trying to see if they can predict when/whether the magma will break through and whether they nee to add more monitoring equipment. The situation is described as having a “great uncertainty”.

The Icelandic Weather OfficeVeður­stofa considers it likely that there will be an eruption in Bárðarbunga and has raised the the warning stage for air traffic from yellow to orange because of this (Ed: orange is the final stage before “It’s currently erupting”). This was announce today on the noon news of RÚV, but scientists are still in a meeting with with the national protective services of the state law enforcement agency.Krist­ín Jóns­dótt­ir, a geology expert at the Weather Office, said in a conversation with RÚV that it’s the view of the scientists that magma is on the way up under the crust in two locations. The volcanic system shows continuous activity and is likely to erupt.

Specialists at the Weather Office have pointed out that if the current activity ends in an eruption that there could begin a volcanic flood surge which would most likely go down the Jökulsá á Fjöllum (Ed: That’s much better than it going west! No dams there!)

Updated 12:49: The weather office has now announced that the GPS position meters give a strong indications of magma movement inside Bárðarbunga.