Perhaps the most important thing to keep in mind is that the flat earth is of no consequence compared to the murder of almost all of humanity.

OK, I’ve made two attempts to contact Mark Sargent personally about his logo and to date I haven’t received a reply. Mark Sargent claims to be a Christian and I hope he is, but it’s been my experience that folks who are sincerely trying to get the truth out there, Christian or not, at least try to respond to sincere questions. Maybe he’s just busy, I don’t know. But look at this thing:

I think the flat earthers are making some very compelling points, and I have several of their videos posted on this site. But as I logged on to Mark Sargent’s Youtube channel the other day I noticed this logo. Now, if you look at things involving secret societies and the New World Order every day, you notice occult symbols. So, at once I saw the the Seal of Cagliostro ($ Serpent pierced by an arrow indicating “The Great Work” of Freemasonry) as well as the two columns of Freemasonry that we see everywhere.

OK, so what’s up? Is the earth a globe after all? …I don’t know. But another question comes up: Why would the same false prophecy teachers who are bringing us Dispensational error, the Nephilim fable, Zionism, the end times script deception, (some of them) pointing us back to the law through our alleged “Hebrew Roots,” also be bringing us the ‘truth’ about the flat earth?

One: If the Zionist/Illuminati/Freemason/One-World Government creators are spending a fortune misdirecting/distracting Christians from the truth and the gospel to focus on fables/date setting/sign-watching/false doctrines… why not scoop up the people who aren’t paying attention to all that but are starting to tune in to all the flat earth clues? That way, they can bring even more Christians into their fear-mongering end times script. After all, The very nature of a deception is that it contains some truth…

Two: The flat earth is yet another Freemasonic sci-op. 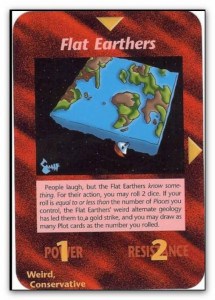 I also noticed that Mark Sargent’s website: marksargent.com, “The Mark Sargent Show” is requiring that you become a member before you can view it.

I’ll be candid, I like the flat earth theory. And maybe I’ve been duped again, but it does seem to fit the scriptural description of the earth better than the globe model does. But it has gotten awfully popular recently, and I’m not liking who I’m seeing promoting it.  …Mark?