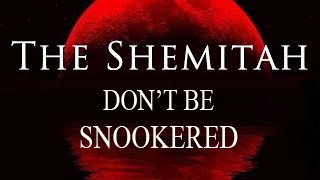 Back in 2012 I wrote a short response piece to Jonathan Cahn’s inept handling of Scripture known as The Harbinger. I ended with this line:

“A Christian enthralled by this twaddle deserves the label of biblical illiterate.”

I haven’t changed my mind. But Cahn of course returned with more twaddle, a new book called The Mystery of the Shemitah. No, I don’t plan to waste my time reading it. Would a doctor read a book on why giving yourself an appendectomy is a bad idea? Would an astronomer read a book on the evidence for a flat earth? Would a computer programmer pour through a manual on MS-DOS? People who have a serious grasp of any given field don’t waste their valuable time on reading material that is utter nonsense and cannot result in learning anything of value. I’m a biblical scholar. I already know anything Cahn writes is bunk.

But I do get questions about The Shemitah and the way Christian “leaders” promote it. Let me be clear: Many Christian leaders — pastors, talk show hosts, televangelists, “Bible teachers” — are truly ignorant when it comes to handling Scripture. Anyone who could read Isaiah 9:8-12

, the passage on which The Harbinger was based, and conclude it’s about America, is simply biblically illiterate:

8 The Lord has sent a word against Jacob,
and it will fall on Israel;
9 and all the people will know,
Ephraim and the inhabitants of Samaria,
who say in pride and in arrogance of heart:
10 The bricks have fallen,
but we will build with dressed stones;
the sycamores have been cut down,
but we will put cedars in their place.
11 But the Lord raises the adversaries of Rezin against him,
and stirs up his enemies.
12 The Syrians on the east and the Philistines on the west
devour Israel with open mouth.
For all this his anger has not turned away,
and his hand is stretched out still.

There are seven clear, unambiguous points in this brief passage that tell us who it’s for and what time in history it was situated, and yet “Christian leaders” across the US thought Cahn was on target by telling us the passage was against the US and verses 10-11 prophesied the fall of the twin towers on 9-11. This is sheer, brute force ignorance. Why even look at the words of the text? It’s as though a mass exegetical lobotomy was performed on Christians throughout the land. (And these same believers will tell you that you need to interpret the Bible “in context” when they don’t share a view you might have about a passage).

The Mystery of the Shemitah is the same sort of bilge. If you’ve recently endured the pain of someone in Church who desperately wants to share the thrill of Obi-Cahn’s mystery with you, I suggest you read this lengthy critique, and then share the thrill of your own discovery with the person who asked.