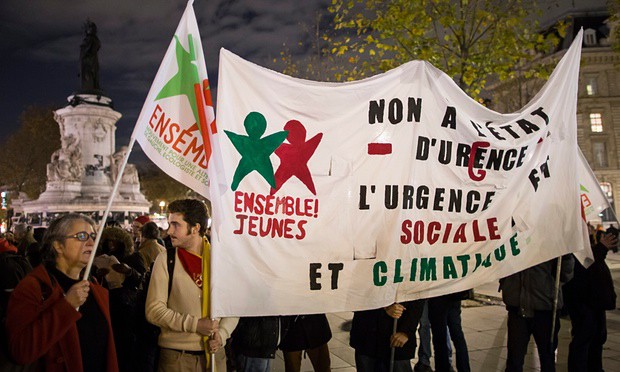 At least 24 climate activists have been put under house arrest by French police, accused of flouting a ban on organising protests during next week’s Paris climate summit, the Guardian has learned.

One legal adviser to the activists said many officers raided his Paris apartment and occupied three floors and a staircase in his block.

French authorities did not respond to requests for comment but lawyers said that the warrants were issued under state of emergency laws, imposed after the terror attacks that killed 130 people earlier this month.

The author and climate change campaigner, Naomi Klein, accused French authorities of “a gross abuse of power that risks turning the summit into a farce”.

“Climate summits are not photo opportunities to boost the popularity of politicians,” she told the Guardian. “Given the stakes of the climate crisis, they are by their nature highly contested. That is democracy, messy as it may be. The French government, under cover of anti-terrorism laws, seems to be trying to avoid this, shamefully banning peaceful demonstrations and using emergency powers to pre-emptively detain key activists.”

Since Thursday, three people have been placed under house arrest in Rens, two in Paris, two in Rouen and one in Lyons, according to campaigners. They may now only leave their houses to sign a post office register verifying their whereabouts, three times a day.

Joel Domenjoud, a legal activist, said that he had been served with a restraining order wrongly describing him as a “principal leader of the ultra-left movement” just hours after a judge refused to hear an appeal against the ban on the climate demo that he had petitioned for.

“I wasn’t there when they came to my house but my neighbour called me to say ‘What’s wrong? The stairs are full of cops from the first to the third floor!’” he said.

Domenjoud says he was then followed by several undercover officers, before returning home, where he was served with the restraining notice.

“I feel angry about it because I think they made a big mistake,” Domenjoud added. “They weren’t looking for people like us activists – or if they were, it shows that they can target people for no reason at all and our civil liberties are in danger.”

Thousands of climate campaigners, including high-profile Indian activist Vandana Shiva, have vowed to defy the blanket ban on demonstrations. One protest on Sunday will be protected by a ‘human chain’, while a day of civil disobedience will take place when the summit ends on 12 December, dubbed as ‘red lines’ day.

Numbers are expected to be smaller than previously hoped, but artists have been working around the clock on creations such as a series of ‘inflatable cobble stones’, alluding to a famous slogan from the May 1968 protests: Beneath the cobble stones the beach.

Some protesters argue that the permission granted to football matches, trade fairs and Christmas markets in Paris over the summit period suggests that the authorities’ real concern is to suppress dissent.

During recent protests by Quebec students, participant numbers were kept to below 50 on each march, to avoid a prohibition order.