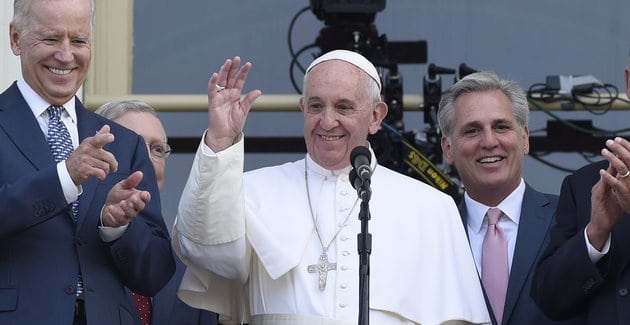 OK, that’s not a real job, but he is seeking to lead the global conversation.

Pope Francis was addressing Congress but speaking to the world.

WASHINGTON — He hasn’t announced his candidacy.

But shrewdly, methodically and with a showman’s flair, the soft-spoken, 78-year-old Argentinian Jesuit priest named Jorge Mario Bergoglio — Pope Francis — showed Thursday that he is running to become president of the planet.

He did so in a congressional ceremony of secular civic pomp in a massive legislative building that, after all, harks back to ancient Rome.

As devout as he is, and as focused on the faith and practice of the Catholic Church, Francis is also campaigning to lead public, secular, political discourse worldwide. He is arguing that the two realms of faith and politics are one, and that the moral and spiritual teachings of faith should inform and guide political decisions for “our common home.”

This is not a new idea, but it seems again a timely one. Francis’ own church sorely needs the refreshing input of world opinion. Secular leaders, meanwhile, are reviled and government itself seems to have lost any sense of moral purpose.

With the rope-line skills of Bill Clinton and the stagecraft mastery of Ronald Reagan, Francis is selling himself and his message in Washington like the political master that he is.

In his speech to the U.S. Congress — the first ever delivered by a pope — he never directly mentioned abortion. He defended the “family,” but didn’t specifically define it by gender or sexual preference. He didn’t speak of an assault on traditional Catholic or even Judeo-Christian culture.

That is so yesterday.

Instead, Pope Francis gave a 45-minute secular homily to Congress on the need for American lawmakers to honor communal morality drawn from the Catholic social gospel. In U.S. political terms, it was as if this man clad in simple white robes was leader of the progressive wing of the Democratic Party.

He beseeched U.S. lawmakers — and, by extension, government leaders around the world — to use their temporal power to lift up those in extreme poverty, to fulfill promises of racial equality, to make peace with former ideological enemies, to welcome immigrants with open arms, to end arms sales and to save the ecology of the planet.

Francis singled out for praise and emulation Abraham Lincoln, Martin Luther King Jr., Dorothy Day and Thomas Merton. It was a roster of heroes who, taken together, provide a template for government action on behalf of the dispossessed.

His approach draws on his roots. As a youth in Argentina, he had admired Juan Peron, whose brand of paternalistic, personality-cult socialism propelled him to power with increasingly enthusiastic backing of the Catholic Church. Today, Francis skillfully wields social media and his own popularity.

The pope’s challenge to Congress was theoretically bipartisan — indeed, universal — in nature.

But if conservatives in the House chamber had expected at least a few nods in their direction, they received next to none. Republicans applauded and stood politely when necessary. But it wasn’t their context, and, in purely political terms, he isn’t their pope. For Southern Republicans, it’s hard to imagine a less palatable list of heroes than the ones Francis listed.

The first pope from the Americas arrived in the United States just as its next presidential contest takes center stage, and he plunged right in to the debate, hitting on climate change, immigration and the refugee crisis.

Politically speaking, his “common good” theme has a sound defensive side: Moving the subject away from abortion, sexual orientation and gay marriage could also downplay the church’s own controversial record on matters of priestly behavior.

But the new emphasis on economics, race and social justice has another, broader aim: to win new converts in the developing world by offering to lead the armies of the poor and disadvantaged. To put it another way, he’s taking the church back to its original base.

Francis knows the demographics: In Latin America, Africa and elsewhere, the Catholic Church is in competition with Islam and Evangelical  Protestantism.

The pope wants to win that battle, and Washington was one more stop on the campaign tour.