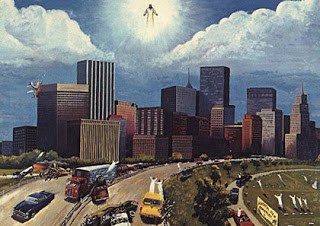 There is a theory being circulated on the internet about a pre-trib rapture teaching that was invented by John Nelson Darby who has been claimed by some to have been a Freemason.

As the story goes:

The false pre-tribulation rapture was invented by a Jesuit priest named Francisco Ribera (1537-1591). Ribera was commanded to create a new eschatological doctrine that would combat the historical Protestant view that the Catholic church was one of the beasts written of in the book of Revelation.

A second Jesuit priest, Manuel De Lacunza, wrote a book supporting Ribera’s Futurist doctrine under the pen name “Juan Josafa (Rabbi) Ben Ezra” in 1791. Lacunza took on a fake name in order to mislead Christian people into thinking the book was written by a Jew and not a Jesuit. If the Protestants knew a Jesuit was behind this new doctrine they would have never accepted it.

A third Jesuit priest, Luis De Alcazar, wrote a commentary titled “The Investigation of the Hidden Sense of the Apocalypse”which put forth a second false doctrine, its purpose was to contradict the historical Protestant view. This new doctrine was called “Preterism” and basically espoused that the Emperor Nero was the Antichrist and that the prophecies in book of Revelation were fulfilled by 70 A.D.

Both new doctrines, Futurism and Preterism, were created by the Jesuits in order to deceive Protestant Christians and to obfuscate the prophecies of Revelation. Both the book of Daniel and the book of Revelation clearly define the Catholic church to be loyal to Satan and not to God. We’re talking about the Elite hierarchy of the Catholic Church (The Pope and most of his cardinals) not the everyday catholic who goes to church every Sunday.

The Jesuits passed their doctrine onto Edward Irving (1792-1834), a Scottish Presbyterian and forerunner of the Pentecostal and Charismatic movements. Irving translated Lacunza’s work from Spanish into English in a book titled “The Coming of Messiah in Glory and Majesty,” published in London in 1827 by L.B. Seeley and Sons.

Edward Irving was a Charismatic preacher from Scotland and had a small congregation. A young girl (15-years old) by the name of Margaret McDonald had a series of visions in the early 1830s. These visions supported a pre-tribulation rapture of the saints as established in the writings of Francisco Ribera. She wrote a letter to Irving concerning her visions and Irving brought her revelations to a prophecy conference in Dublin Ireland in 1830 which was held at Powerscourt Castle. Edward Irving aggressively promoted Futurism, the Jesuit created rapture doctrine based on Ribera’s lies.

From England and Scotland the Jesuit created Pre-Tribulation Rapture doctrine grew and then spread to America. It was John Nelson Darby (1800–1882) who also attended the prophecy conference at Powerscourt Castle who was the first American preacher to zealously spread the Jesuit inspired false doctrine.

Next came the infamous American, Cyrus Ingerson Scofield (1843-1921). Cyrus Scofield was heavily influenced by the writings of John Darby. Scofield interwoved Futurism into the notes of his Scofield Reference Bible.The Scofield Reference Bible was published by Oxford press in 1909. By 1930 over one million copies were in circulation and the pre-tribulation rapture doctrine known as futurism was well on its way to becoming a ubiquitous part of mainstream American Christianity.”