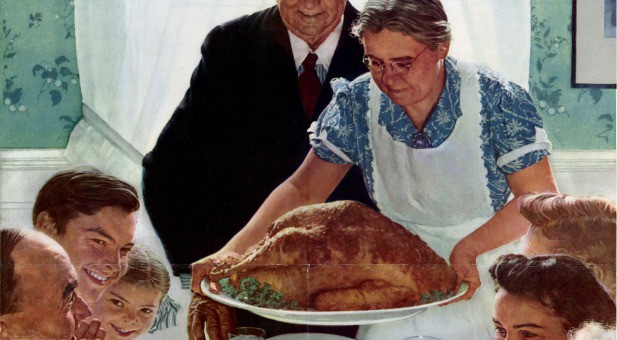 As Americans mark Thanksgiving this week, one thing noticeably absent from public discourse is our nation’s first Thanksgiving celebration—and the One to Whom those early American settlers gave thanks.

Instead, talk of “Pilgrims” is taboo, and talk of giving thanks to God even more so. And beyond this, very few in America today recognize the strong theme throughout our nation’s history of national leaders’ setting aside a day of Thanksgiving not to family, friends or an unnamed source but to God.

Religion and culture expert Dr. Alex McFarland says this is not only a tragic rewriting of American history but also a subtle strategy to strip America of the very core that makes her a nation worth celebrating: her acknowledgement of God.

“Our nation’s founding fathers believed that, as individuals and as a nation, we should give thanks to our Creator. Yet, today, we see this truth being downplayed and even downright ignored. The truth of the matter is that when the Mayflower’s 102 passengers arrived in Massachusetts in 1620 and then signed the Mayflower Compact, they put their names to the fact that their purpose in undertaking such a journey was ‘the Glory of God, and the advancement of the Christian faith,'” McFarland says.

“And although more than half of the settlers died during that first, harsh winter, that following summer’s farming efforts yielded a bountiful crop, due in significant part to the assistance of friendly Native Americans. That first Thanksgiving was set aside as a feast to thank God and celebrate with the Native Americans.”

McFarland added that just a few short years later, the governor of Plymouth Plantation, William Bradford, declared an official day of thanksgiving, to “proclaim that all ye Pilgrims, with your wives and little ones, do gather at ye meeting house, there to listen to ye pastor and render thanksgiving to ye Almighty God for His blessings.”

More than 150 years later, as governor of Virginia, Thomas Jefferson set aside a day of “public and solemn Thanksgiving to Almighty God.” And in 1785, New Hampshire Gov. John Langdon set aside November 24 to “testify our gratitude to the Author of all our Mercies, and to confess our manifold transgressions.”

“With the unanimous approval of Congress, our first president, George Washington, proclaimed a national day of Thanksgiving in 1789,” McFarland says. “In his official declaration, Washington wrote that America should thank God for His many blessings, ask for forgiveness for personal and national sins, and pray that God would ‘promote the knowledge and practice of the true religion.’ And nearly 75 years later, Abraham Lincoln passed a Thanksgiving resolution that cited Psalm 33:12 and stated, ‘It is announced in the Holy Spirit and proven by all history, that those nations are blessed whose God is the Lord.'”

McFarland says the truth is that throughout our nation’s history, we have acknowledged Almighty God as the source of our blessings.

“Our belief in God and acknowledgement of our dependence on Him is what makes America America,” McFarland says. “Religious liberty is why the Pilgrims sacrificed so deeply and came to our shores to begin with. This week, let’s give our families a history lesson when we gather at the Thanksgiving table—and let’s give thanks to the only One Who truly is worthy of it, God Almighty.”