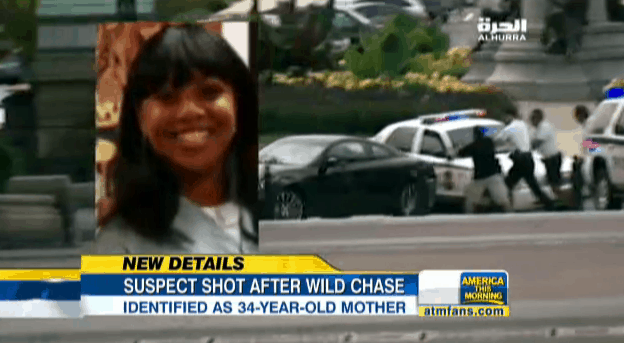 Of course, we already know that “something is very wrong in America”. Miriam Carey’s story bears repeating, though, especially for the folks who are still trusting the 6 o’clock news.

I am going to turn the tables on you today. I typically use my commentary to explain to the reader what I think is happening. Today, I would like to hear from you.

What is going on? Something is VERY wrong in America.

There cannot be a safer place to be in America than the White House. The Secret Service is legendary for its ability to protect the president.

Look. No matter how much we dislike the President, we all want to see he and his family protected. It should concern us when the Secret Service appears to have “dropped their guard.” If the President isn’t safe, how can anyone be safe? This past weekend, two men jumped over the fence at the White House.

I have no proof, but I have to believe that they have the latest security gadgets…stuff so mind blowing that the average American wouldn’t even believe it if you showed them.

I assume they have snipers on the roof. Cameras everywhere. Motion sensors and heat sensors. Foot patrols and guard dogs. Where were the SWAT teams? Supposedly the Secret Service has a “ring of security” 4 layers deep to prevent something like this from happening. Jumping the fence has been attempted 32 times in our history and no one has ever made it inside. It happened twice this week.

They have protocols that are so stringent that a Christian can’t get anywhere near the place. In fact, I’m not even sure that Republican members of Congress can get a pass inside…especially if he has any relationship to the Tea party.

I have engaged in street ministry outside the White House fences, and the cops there are tyrants.

Yet twice in the past week, two dudes were able to climb over the fence and make their way into the White House? Reports say the doors weren’t even locked. One of them made it to the stairwell that leads to the residence of the First Family. And no one noticed. Not one alarm went off. Not one shot was fired. Not one burly agent tackled them on the lawn. Not one barking dog was released.

A year ago a young single mother in a car was shot dead by Secret Service agents when she was driving her car erratically in the area of the White House. She had a one-year old baby in the backseat. She was unarmed. Reports say as many as 7 officers opened fire on her. She was hit 5 times…in the back.

She was killed over 2 MILES from the White House.

The media has given scant coverage to all three incidents. Last week, two different men jump the fence and ran INTO the White House and not a dog even barks…

Sharpton and Jackson have not barked about Miriam Carey either. They are too busy worrying about some black teenager in Missouri to fight for justice for single, black, unarmed, murdered-mother Miriam Carey.

This should trouble all of us regardless of your politics.

Did someone give another “stand down” order? Why would the Secret Service allow their reputation to be soiled?

Can someone please help me out here?

Check us out today: www.newswithviews.tv