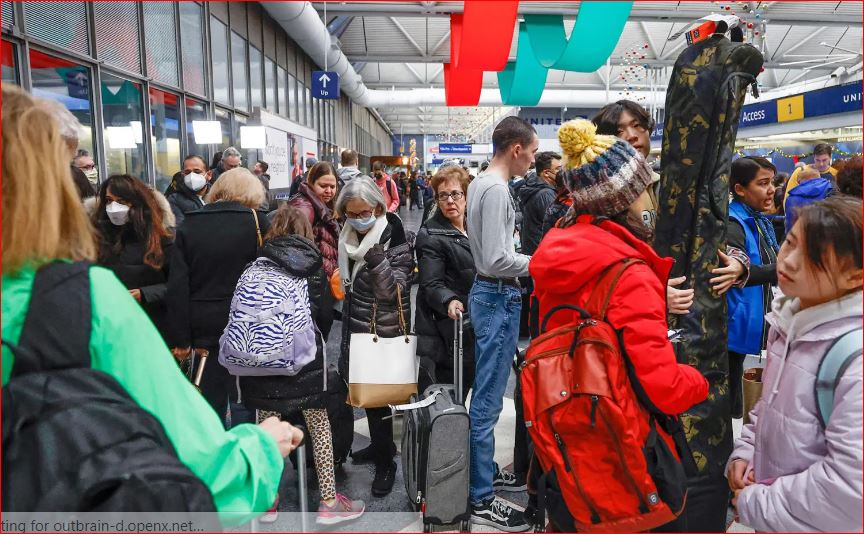 Only those who were there can truly relate to the chaos and frustration of Christmas travel in 2022, particularly on Southwest Airlines. I’ve had people tell me that they’ve experienced something similar at one time or another. But I have to say that no, they can’t. Not unless they’ve experienced holiday air travel in a war-torn or communist country. What happened this week was unprecedented.

A New York Times headline announced one of the components of the disaster. 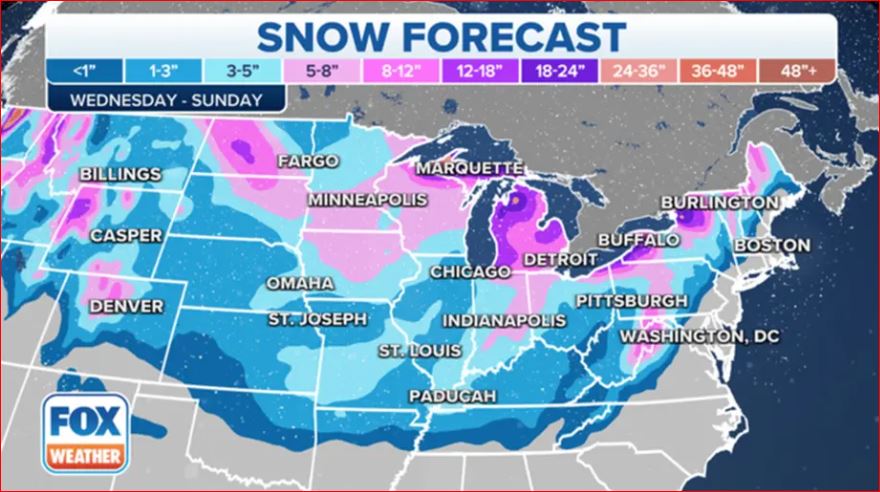 The news churned out stories of the “cyclone bomb” (give me a break) that swept across the country setting off a cascade of cancelled flights. Of course, what they’re not reporting is weather modification technologies and the part this plays in the “climate change” agenda. You know, the one that demonizes the breathing of air and flatulence of cows. 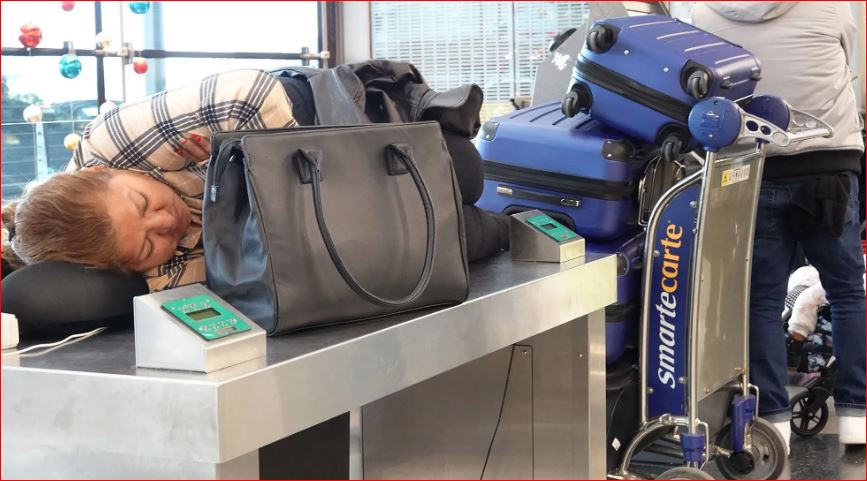 Hardest hit by far was Southwest Airlines, the airline I was booked on.

My husband had suffered a major health crisis on December 3rd, and after a nightmare experience with the “COVID” agenda at the hospital (that I’ll share another time) and then a month of caring for him at home as he recuperated, I’d planned to take a break for a few days and visit a girlfriend on Christmas Day.

The New York Times cited Southwest’s “point-to-point” vs other airlines “hub-and-spoke” route model as the reason for the airline’s meltdown during the engineered weather crisis.

“Southwest uses a “point-to-point” route model that often lets passengers fly directly from smaller cities and regions without having to stop at a central hub like Denver or New York. Point-to-point flights cut travel times by eliminating the intermediate stop — typically a big advantage for travelers who are not flying from major metro areas.

Other large carriers like United and American rely on a “hub-and-spoke” model in which planes typically fly from smaller cities to a hub airport where passengers change planes.”

Makes sense I suppose. If only it didn’t fit in so well with all the other orchestrated chaos we’re experiencing…

“Don’t try and tell me this is just about the weather or being short on staff! I have seen this before! I know what this is! Anyone from a communist country knows exactly what this is!”

Carlos does know. But the generations who escaped tyranny and fought for freedom are all but gone. For the most part, they’re senior citizens now; you know, the dumb, old people who don’t have a clue about the modern world. They’re so unwoke, so unenlightened. Always screaming about the evils of communism, “political correctness” and “gender fludity.” What do they know? Best to stuff them away where no one has to listen to their alarmist rantings.

The line I stood in to rebook my flight, which had been cancelled after six hours of delays, took nearly four hours to get through. When I finally reached the counter, I was amazed at the professionalism of the employee there. In his place I’d have been struggling not to break down in tears. OK, guys don’t cry, but the women attendants were holding up too. I was impressed with the strength of the human spirit among the employees and the crowds of people in the same situation that I was.

During my now ten hours at the airport I’d heard at least a half dozen heart-wrenching stories of how people’s lives had been disrupted. I prayed silently for each one of them as I listened. One girl’s mom was in the hospital preparing to undergo major surgery in the morning to remove a cancerous tumor. She was fighting to hold herself together, desperate to be there and morally support her mom. My heart broke for her. I’d have given her my flight – if there’d been a flight.

At that point it was 10:30pm. My re-booked flight was for 5:00am the next morning so a hotel didn’t make sense… if there’d been a hotel. Which there wasn’t. They were all booked.

The only thing still open at the airport was the bar, so I found a spot there to pay for and eat the sandwich I’d found and listened to more stories from people who had been at the airport for days. Sandwich finished, I headed to the gate where my flight was scheduled to board in a few hours. I tucked my belongings next to a pillar by the window and laid down on the concrete floor alongside a few other passengers. Feeling like a homeless person, I fell asleep the instant my head hit my winter coat that I’d curled up and used as a pillow.

Jolted awake by what could only have been my guardian angel, I looked at my phone and saw that it was 4:30am; time to board my flight. But the sign above me said “St. Louis.” They’d changed the gate! Speed walking half asleep, I jetted to the other end of the Southwest terminal as fast as my feet could carry me and finally arrived at the right gate. Thankfully the flight had been delayed (imagine that), but only by ten minutes. What a relief to walk down that hallway, board the aircraft and settle into a window seat! The flight was connecting in Phoenix, but there were almost hourly flights from Phoenix to my final destination; San Diego. Lots of back-ups. Surely things would go smoothly from this point on.

After standing in an hour-long line to hope-against-hope, try and get an earlier flight (The tendency was for more flights to cancel as the day wore on. The safest were the early morning flights. But people had figured this out and all the early morning flights were over-booked so, praying that it wouldn’t be cancelled, I settled in to wait for my flight. It wasn’t long before the first announcement came that the flight had been delayed. Here we go again.

How can I describe how crowded the airport was? Finding a chair to sit in was like finding gold. Many people were just plopped down on the floor, so you had to watch that you didn’t step on them or their belongings. Most were having the now familiar conversations about planes stuck in severe weather and delays as they waited for enough crew members to fly. Many people had been in the airport not for hours, but days. The hallways were packed. Trying to get anywhere in a hurry was like weaving heavy traffic on the 405. The scene was more like an internment camp than an airport.

People were trying their best to hold it together, but each and every one dealing with crushed holiday plans, they were on the edge of their nerves.
How could the airline be this disorganized? Surely they’d dealt with severe weather before.

A pilot who’d “timed out” (they can only be on the clock for ten hours I learned) appeared at the gate and stopped to visit with some of the stranded passengers. Like the rest of the employees, he felt terrible about what people were being put through. “Tell people, they need to know. Get it out on social media,” He said. “This isn’t just about weather and it’s not all happening by chance. This is the result of management’s scheduling decisions.”

Thanks to the same pilot who pointed me out to another woman who was desperate to get to San Diego.

“Are you going to Carlsbad?”

“I rented a car. Wanna come along?”

“Can Pat come?” Pat (not her real name) was one of the women I’d befriended during the ordeal. She lived in Carlsbad and was headed home.

“Yvonne. Great to meet you!”

We exchanged names as we rushed toward the rental cars. The tram to the rental car center was a virtual sardine can full of weary travelers with the same idea.

“God, please let there be a car.” Thank God there was a car. We piled into the Ford Mustang she’d  picked out.

Cathy; “Do you ladies have any problem with me driving fast?”

Cathy’s adorable seven year old little granddaughter in tow, the four of us rocketed through the desert to get to Carlsbad. We called it the “Planes, Trains and Automobiles” trip.

We talk so much about all the bad things going on in the world. Hope is a precious commodity these days as tyrants implement more and more draconian measures. The weather is shredded and blamed on humanity. What used to be understood as depraved and unthinkable is celebrated. Common sense seems to be all but extinct in the prince of this world’s passion play. It’s so easy to become bitter and lose hope in humanity. But what I saw at the airport this week served to do just the opposite for me. Because I saw literally thousands of people faced with heartbreak and grueling circumstances choosing to hold their heads high and treat their fellow man with respect and dignity. Oh sure, one or two tried to cut in line or demand special treatment. Sure, people were at wits-end and tempers were short. But they TRIED. I felt so much love for them and caught just a glimmer of how God must see us.  And I was so angry at the corruption behind the, I’m quite sure deliberately created mayhem.

“More than 2,500 flights, or 62 percent of its planned flights on Wednesday, had been canceled, according to FlightAware. And Southwest said in a statement on Wednesday that it planned to fly one third of its scheduled flights for the next several days as it tries to return to normal operations, meaning it would continue to cancel close to 2,500 flights a day. Some passengers, unable to rebook Southwest flights, rented cars or spent hundreds of dollars to buy tickets on other airlines.”

The company issued a statement on Thursday stating that it planned to return to its normal schedule on Friday “with minimal disruptions.”

“We know even our deepest apologies — to our customers, to our employees, and to all affected through this disruption — only go so far,” the company said.

Just the same… I’m flying home on another airline.