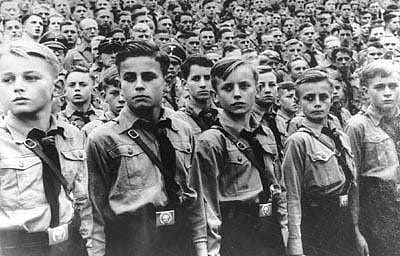 This is nothing less than Hitler’s youth all over again. The indoctrination of children has long been used as a means of engineering social change toward dictatorship. This is as blatant as it is disturbing.

“For all David Suzuki’s folksy rhetoric and supposed care for our world and it’s inhabitants, if we look closer at his connections we can certainly see why he pushes the “climate change rhetoric”. He denies the obvious geoengineering/chemtrail programs which occur almost daily and are hiding in plane sight. Earlier videos show David Suzuki likening people to maggots. He is one more NWO shill/eugenicist. David Suzuki, owns 3 one million dollars homes, has five children, but tells people that WE have to reduce our consumption. He has very wealthy funders which keep his foundation afloat. The billionaire Bronfman family being on his Board of Directors, the family who founded Seagrams, and who is also involved in the biz of geoengineering. Bronfman’s are also closely tied with the Liberal Party Stephen Bronfman, a key fundraiser for Justin Trudeau. From the Watershed Sentinel; ” Another Canadian billionaire, Edgar Bronfman JR is backing a US geoengineering company called Global Thermostat. Bronfman, the former Warner Music CEO and heir to the Seagram’s fortune, has invested $15 million in Global Thermostat, and he is the Executive Chair of the company. Bronfman is also a member of the National Advisory Board at JP Morgan and the Council on Foreign Relations. Follow the money folks, it will take you on the same stinky trail every time. https://www.youtube.com/watch?v=y0kTkZqahho” – Suzanne Maher

“When even the brightest mind in our world has been trained up from childhood in a superstition of any kind, it will never be possible for that mind, in its maturity, to examine sincerely, dispassionately, and conscientiously any evidence or any circumstance which shall seem to cast a doubt upon the validity of that superstition. I doubt if I could do it myself.” – Mark Twain