Today in the Fallen Angel/Human Hybrid series I want to look more at the changes in the church that have caused Christians to become vulnerable to deceptive doctrines.

Layers Upon Layers of Deception

You may have run across some of the online prophecy teachers  that I’ve been referring to, being very unkindly “exposed” by “Discernment Ministries,” and then, many of those ministries are being very unkindly “exposed” by yet other discernment ministries. It can be pretty confusing to sort out who to believe. The important thing, of course, is to believe the Word of God, but in order to do that, we need to really have a solid understanding of it. In these confusing times, we are in more need than ever of the sound doctrines found in God’s Word. 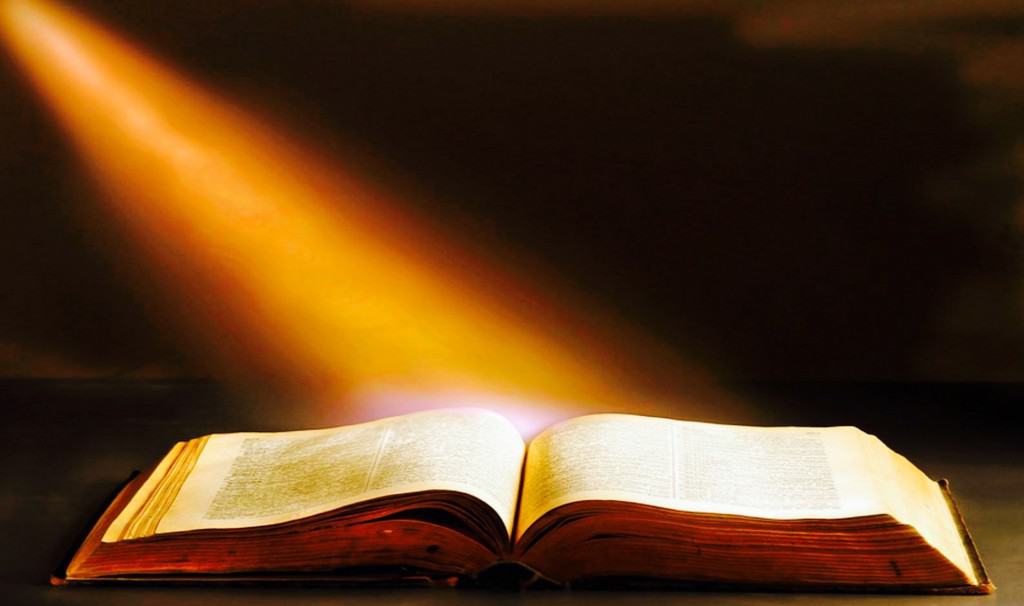 Several new doctrines entered the church in the 19th century, and I’d encourage every Christian to find the time to familiarize themselves with that time in church history. Look up the names of the men who introduced new thoughts. Look into their own writings. Definitely find out if they were members of a secret society. Find out as much as you can about them and then look at what they brought to the doctrines of Christianity. Don’t passively take my word or anyone else’s on the doctrines of Christianity. The stakes are simply too high and too many well-meaning, sincere Christians have been hoodwinked. There are a few teachers online who I have a lot of respect for. But I’ve learned to listen carefully to what they teach and compare it against God’s Word. I don’t care how educated you are, none of us are beyond being wrong from time to time. 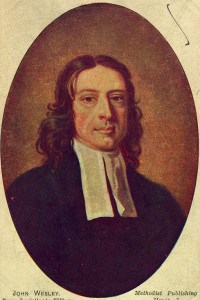 In the 1700’s, Armenianism and the teachings of John Wesley brought about the beginnings of “legalism” and “perfectionism”, works-based doctrines. While Wesley himself was not a perfectionist, per se’, in the 1800’s Charles Finney presented a Legalistic Armenianism. Finney openly denied the sufficiency of the atonement which imputes Christ’s righteousness to all who are found in Him and taught that righteousness was based in the believer’s ability to walk in constant obedience. Keep in mind the legalistic Catholicism that the Reformation brought the church out of. Finney taught that man had to earn his own salvation and change his own heart, that man can and must be sinless. If he sins, he has to start over again to obtain salvation. The doctrine of imputation made clear in the Bible teaches that Jesus lived a wholly moral life and His righteousness was credited to us by grace alone through faith alone.

“I could not but regard and treat this whole question of imputation as a theological fiction, somewhat related to our legal fiction of John Doe and Richard Roe. […] These and similar passages are relied upon as teaching the doctrine of an imputed righteousness: such as these. “The Lord our righteousness” Phillipians 3:9)[…]Christ our righteousness is Christ the author or procurer of our justification. This does not imply that He procures our justification ny imputing His obedience to us.” Charles Finney – Memoirs, pgs 58, 60

How does all that relate to the Fallen Angel Mystical teaching? Following Finney, John Parham, the founder of the Pentecostal movement (which is also known as “Pentecostal Perfectionism”) further added to the insufficiency of the atonement, with the need for believers to experience a “second baptism of the Holy Spirit,” which damaged, or at best convoluted the doctrines of the new covenant and regeneration which teach that a believer receives the Holy Spirit at the time that he places his trust in Christ and is born again (regenerated) in spirit. 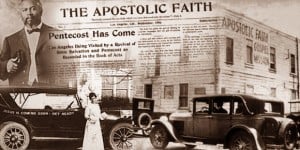 From the late 1800’s through the Azusa Street Mission that started in 1906, the idea of a fresh outpouring of the Holy Spirit was introduced. It was taught that the outpouring of the Holy Spirit at Pentecost in the book of Acts was the “early rain” and that a new outpouring of the Holy Spirit was the “latter rain,” (hence the name of the movement “Latter Rain.”) This all gave rise to the various branches of the modern charismatic movement which has affected pretty much all of Protestant Christiandom. With the Azuza street revivals, Christianity was steered from having it’s footing in sound Biblical doctrine to embracing an experiential faith that was expected to produce perfection in a believer’s life (including perfect health) as well as the legalism which resulted in the appearance of many Futurist cults like Mormonism, the Jehovah’ Witnesses and others. 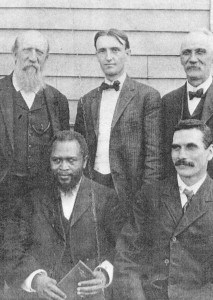 Latter Rain prophets and apostles explained their dismissal of long held Christian doctrine by claiming that “new” teachings, prophecies and interpretations of Scripture that had previously not been revealed to the church, were progressively being unveiled. These new teachings were considered to be doctrine because they were accompanied by spiritual experiences. Experiential Christianity was born. But God’s Word says:

Hebrews 1:1,2 “God who at sundry times and in divers manners spake in time past unto the fathers by the prophets, hath in these last days spoken unto us by his Son.”

Jesus Christ is the Word of God

1 Corinthians 14:29 says that all prophecy in the church needs to be tested and judged by its conformity to Scripture.

1 Corinthians 14:29 “Two or three prophets should speak, and the others should weigh carefully what is said.”

Isaiah 8:20 “To the law and to the testimony: if they speak not according to this word, it is because there is no light in them.”

I was always taught that if I walked by the Spirit I would not gratify the sinful tendencies of the flesh… and that’s true. Galatians 5:16 But I’ve come to realize that what I was being taught involved more “listening for hunches” than it did rightly dividing the Word of truth, guided along by the Holy Spirit.  Now some of you might think that I’m starting to sound pretty “Baptist” when I say that, but I’m not talking about denominations. And I’m not talking cessation of the gifts of the Holy Spirit.

This steering away from the doctrines in God’s Word and leaning more toward experiential faith was (disturbingly) written about by Theosophist Alice Bailey. 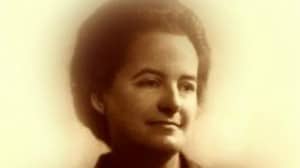 “…The church movement, like all else, is but a temporary expedient and serves but a transient resting place for the evolving life. Eventually, there will appear the Church Universal, and its definite outlines will appear towards the close of this century… This Church will be nurtured into activity by the Christ and His disciples when the outpouring of the Christ principle, the TRUE second Coming has been accomplished… the Christian church in its many branches can serve as a nucleus through which world illumination may be accomplished… the church as a teaching factor should take the great basic doctrines and (shattering the old forms in which they are expressed and held) show their true and inner spiritual significance. The prime work of the church is to teach, and teach ceaselessly, preserving the outer appearance in order to reach the many who are accustomed to church usages. Teachers must be trained; Bible knowledge must be spread; the sacraments must be mystically interpreted, and the power of the church to heal must be demonstrated.” Alice Bailey – The Externalization of the Hierarchy

Did you get that? She’s referring to traditional church doctrine as “old forms”: should “take the great basic doctrines and (shattering the old forms in which they are expressed and held) show their true and inner spiritual significance.” She is talking about teaching the church the “true inner spiritual significance” of church doctrine!  Doing away with “the old forms.”

A Shift In The Church

Latter Rain doctrine is actually a modern version of  Gnosticism. Early Christian Gnosticism taught that a spiritual elite possessed “hidden knowledge” of the divine realm and placed their personal revelations, spiritual experiences, and private interpretation of Scripture above the ordinary revelation of God’s Word.

The Luciferian plan for a New World Order involves a great deception in the church. It involves the bringing in of occult spirituality and Ecumenism to bring about the planned one world religion. It involves confusing and distracting the masses with esoteric fables. In order to do that, an infiltration into the church was needed to steer Christians away from the teaching of doctrine. 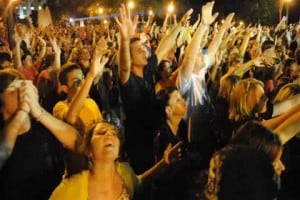 Charismatic Christians have brought the gospel and a lot of good to the world, resulting in the salvation of countless souls. So credit where it’s due. I considered myself to be a charismatic Christian for years. It was only when I started to research into how false teachings, such as the mystical fable of the fallen angels we’ve been looking at, managed to slip into the church, how as Christians, we’ve become so easily ‘swayed by every wind of doctrine,’ that I realized how imperative it is to have the basic doctrines of Christianity firmly under our belts.

I am not talking about cessation of the gifts of the Holy Spirit or saying there are no signs and wonders for the church today. But I believe that the popular focus I’m seeing on them, to the neglect of a solid understanding of the basic doctrines of Christianity, is leaving us vulnerable to deception, since we are told that satan is able to perform “signs and lying wonders” 2 Thess 2:9.

As a direct result of these things, we’re seeing a myriad of doctrines in the church today like at no other time in church history. The Catholic church with its’ Ecumenism, bringing all denominations back under “mother Rome” is being promoted throughout Protestant denominations, unhindered by sound doctrine, because the doctrines of the Christian faith have been neglected. And while no denomination is without its’ errors, this error is decidedly most apparent in the charismatic churches.