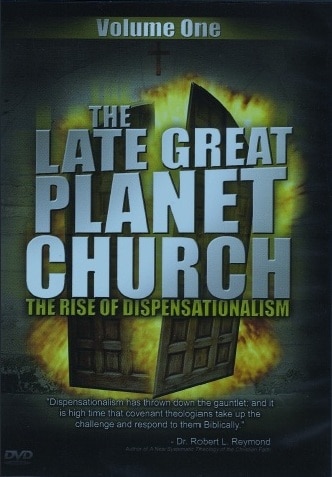 This article was posted in 2011 as was the DVD, but this topic is as relevant today as ever. There is also a second volume.

(YouTube link) (The original video was disabled. This is only an excerpt.)
In December 2009, I did research on the Pre-Tribulation Rapture lie and its origin. I’ve always questioned whether the Scriptures reflected Dispensationalism.
In this production, they examine the beginnings, beliefs, and motivations of this movement by focusing on its relatively recent development, stormy history, and its most influential proponents.
There is an interesting doctrine that is lumped-in with this flawed doctrine. Gary DeMar makes the point that most of the early Church fathers made no distinction between Israel and the Church. They saw the Church as the fulfillment of all of the promises made to Israel. This is because the Gentiles were grafted into an already existing Jewish Church. They viewed Israel and the Church as being the same entity. This is a 19th century phenomenon. (All in part 2)
The presentation includes an insight into who John Nelson Darby and Cyrus Scofield were, and comments of people who lived during their time. It wasn’t mentioned in the video, but both of these individuals were Freemasons.
The last discussion is on the issue of salvation and why people go to hell. It is not because they reject the Gospel. People go to hell because they are lost in sin without the benefit of the blood covering.
This is a thought-provoking video! If you want one of your own, there are two places to buy it. I’ve provided a link to Amazon, or you can buy itdirectly from their website.