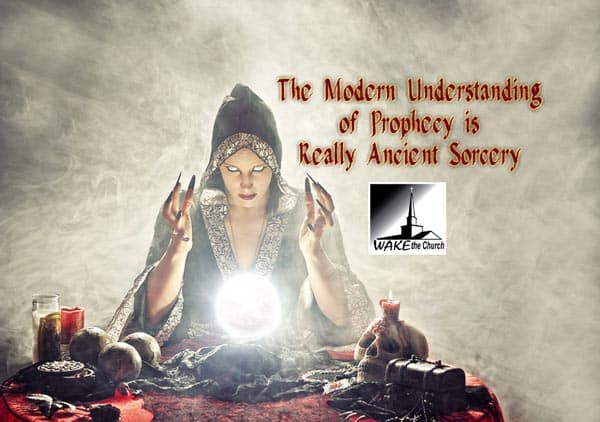 If you asked people randomly in any church in America what the definition of prophecy is you would get 100 different answers. Most people nowadays understand prophecy as someone claiming to be able to decipher scripture, to foretell God’s plans relative to current events, interpret cosmic happenings, dictate into people’s lives and even prognosticate peoples demise as if executors of God’s wrath.

For some the pursuit of the latest prophetic word and insight creates an endorphin rush, prophecy media has become a drug. People spend so much time trying to acquire all these strange doctrines, teachers, and elaborate theories pertaining to prophetic happenings, it becomes very hard not to get sucked into it. Those putting forth these theories, are caught up in the whirlwind of media circuits and PR as they go from congregation to congregation riling up the crowds to their inflated ideas of prophecy and foretelling. Comets, moons, events, all foreshadow our immediate demise apparently, so hurry up and pass the offering plate and buy the books and DVD’s in the lobby.

As exciting as all that is, and as thrilling as it is to chase down the latest celebrity prophet tidbit, the reality is, by the Bibles own definition these things are Sorcery. 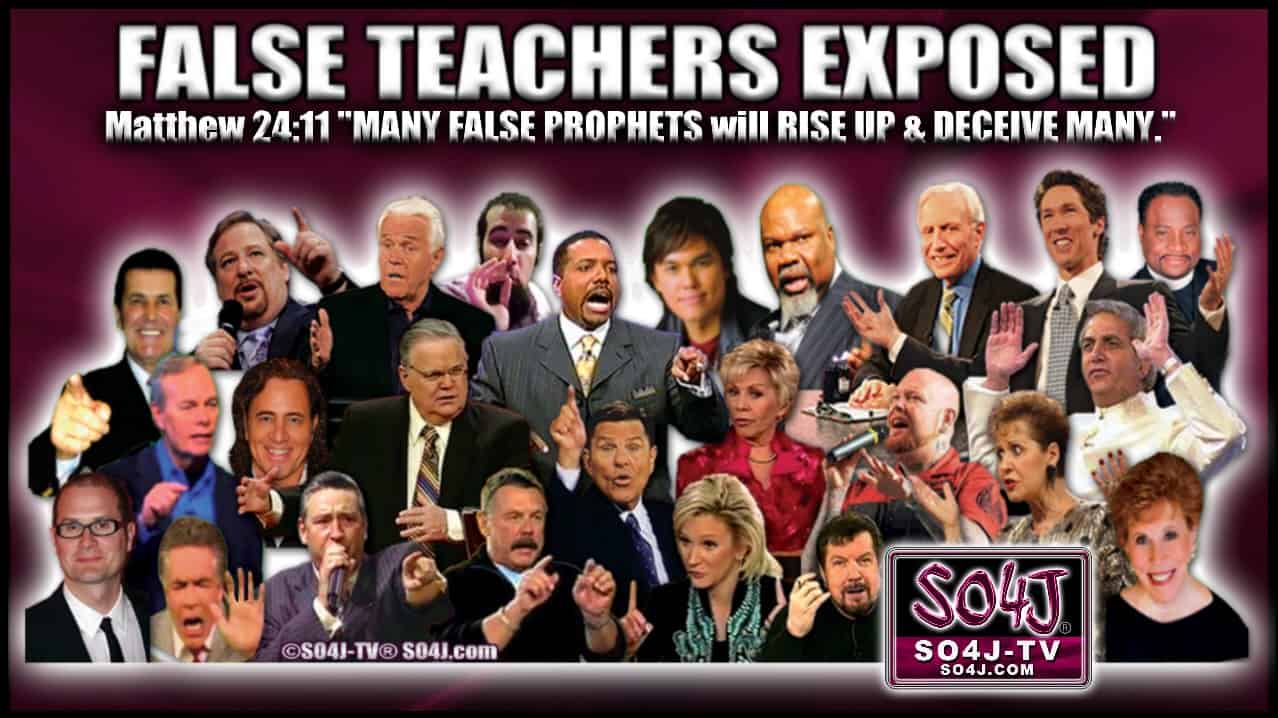 Let’s analysis the words and meanings to come to a fuller, scriptural understanding of what exactly a prophet is and does.

Prophēteía(4394) –  (from 4396 /prophḗtēs, “prophet,” which is derived from 4253/pró, “before” and 5346 /phēmí, “make clear, assert as a priority”) – properly, what is clarified beforehand; prophecy which involves divinely-empowered forthtelling (asserting the mind of God) or foretelling (prediction).

Read the last line again, “…asserting the mind of God”

The Prophets that sprang up after the time of Moses did one thing for the most part, and that is pronounce judgment on behalf of God for violating His Law. God’s Judgment was almost always in the form of invading nations and the enslavement of the Israelites. This is the reoccurring pattern throughout scripture. So when the above definition says “ …properly, what is clarified beforehand” it is exclusively talking about the Mosaic Law. The emphasis was on what has already been written down, what has already been established, codified, and already made Law by God almighty Himself. God always was referring back to the contract he made with Moses, and that first generation of recently freed Egyptian slaves called Hebrews.

The prophet’s job was to pronounce God’s impending Judgment, relative to the violation of His established Law. Everything the prophet did, was point to God, His word, and ultimately to the coming judge of all humanity in the personage of Jesus Christ.

Prophecy is all about the accountability we have individually and collectively to a Holy God.

So the confusion today comes down to a backwards understanding of the two roles of a prophet. The emphasis is always on forthtelling, not foretelling.

Forthtelling ­– The prophet per the above definition is most usually forthtelling, or  “…asserting the mind of God,” meaning admonishing people towards the Law. This is, and this has always been the primary role of the prophet. In modern parlance this means in a divine sense, speaking truth to power.

Foretelling – This is taking explicit instruction and Word’s from God pertaining to the future work He is about to perform and publicizing it abroad.

Foretelling in this authors opinion does not exist anymore. All prophecy is a pronouncement of Jesus Christ, past, present and future. Jesus having lived, died and resurrected is the fulfillment of all prophetic foretelling. Jesus is the ultimate judge of both mankind and the nations. There is no need for another prophet, seeing Jesus is our Great Priest, Prophet, and Eternal King. These are the roles Jesus filled in entirety.

Q. Why is he called “Christ,” meaning “anointed”?

A. Because he has been ordained by God the Father
and has been anointed with the Holy Spirit to be
our chief prophet and teacher who perfectly reveals to us
the secret counsel and will of God for our deliverance;
our only high priest who has set us free by the one sacrifice of his body,
and who continually pleads our cause with the Father;
and our eternal king who governs us by his Word and Spirit,
and who guards us and keeps us in the freedom he has won for us.

As such there is no need for another priest in the Vatican, a so-called prophet on the Trinity Broadcast Network, nor a king in the Whitehouse. Christ is it. I frankly take exception to anyone who claims to fill anyone of these roles today, they are frauds and charlatans. Egomaniacs who dare think they can prognosticate and divine anything more than what Christ has already finished. They read scripture, or look at the moons, or current events and say they can add to the record of prophecy. I say that is utter horse manure and that they are thieves of Christ’s testimony and witness.

So the only thing left is forthtelling, which is speaking Truth to Power. All of the Prophets brought their messages before kings. Whether Samuel to Saul, Elijah to Ahab, or Jeremiah to Zedekiah, it was always kings who were the focus of the railing accusations and warnings of the prophets. As the leader of the people they were responsible for leading the people towards the Law and the Righteousness of God.

Why don’t we see more Christians chastising our government leaders in the spirit of forthtelling? Because speaking truth to power is not a fun, likeable, or easy job. It often costs people more than they are willing to pay, yet that is the primary function of the prophet, to sacrifice everything to speak the truth.

The Church has made False Idols of Prophecy Celebrities

If you notice the people that go around from church to church and show up on every religious TV network and show are always talking about the latest and greatest piece of prophetic insight. That’s because there is no risk preaching this prophecy stuff to Christian congregations, in fact, just the opposite. That is because these modern Christians eat it up and spend billions of dollar annually on the media and books produced by these neo-fortunetellers. They are celebrity prophets, people love them, and people hang on every word they say. With every new crazy theory and book they produce they get richer and richer. These are not prophets, they tickle ears, and are allowed their platforms and space. If they were ever to fervently call out by name the wicked rulers of our modern era, they would be stripped of their fame and fortune in an instant. The life of a prophet, because of their relentless pronouncement of truth to power becomes synonymous with official persecution and the ire of the wicked culture.

Foretelling, something that is finalized in, and speaks only of Christ alone should be a dead art, but instead it has become mysterious, captivating and even a lucrative occupation, exactly how the false prophets and sorcerers where in the days of the wicked kings of Israel.

So if these celebrity prophets are literally interpreting signs in the heavens (Bloodmoons), uncovering hidden, supposed verses with prophetic truths (numerology, and Bible Codes), and layering prophecy verses onto current events(Foretelling) what is it they are actually doing? They are engaging in sorcery and witchcraft. God say’s these people are a curse and that he will make their knowledge foolish.

“Thus saith the LORD, thy redeemer, and he that formed thee from the womb, I am the LORD that maketh all things; that stretcheth forth the heavens alone; that spreadeth abroad the earth by myself; That frustrateth the tokens of the liars, and maketh diviners mad; that turneth wisemen backward, and maketh their knowledge foolish;;” Isaiah 44:24-25

God speaking through the Prophet Jeremiah discerned their intents and called these types “lying prophets” that speak from their own deceitful hearts.

“How long shall [this] be in the heart of the prophets that prophesy lies? yea, [they are] prophets of the deceit of their own heart;”  – Jeremiah 23:26

If you truly think that there is a role for “foretelling” type prophecy, then you must believe the final word, prophecy and life of Christ Jesus must not be sufficient and somehow you can add something to the scriptural record. This is a blasphemy and heresy and should be a convicting realization for anyone who is obsessed with these things. Charismatics, Mormons and other false religions that emphasis miraculous signs and knowledge over the principles of scripture are in God’s eyes liars and deceivers, He didn’t give them a “word”, He gave them Christ.

If you really want a up close look at the failings of these would be modern prophets and how they interact with the political scene simply look at the failed presidential candidacy of Ted Cruz. He was made out to be the next messiah by tele-vangelists and his family, and lost horribly showing the false nature of their prophecy. READ HERE They are a sorry lot to say the least.

The right use of prophecy is the difference between freedom or slavery with in our society. When the Christian church is wholly sold-out to the ear-tickling, prophecy pimps who foretell everything other than Christ crucified, they become fat, lazy, entertainment driven, Christians. All they know how to do is feast on the latest fear-mongering prognostication on the radio or TV. They are caught up in the razzle dazzle of prophetic speculation and mystery. This thinking has taken over the American church, and dominates the thoughts and worries of millions. Foretelling is done away with, Christ is sufficient.

What we need is more forthtelling, and to drop all this sorcery type foretelling that we see in the churches today. We need more people using their voices to call out the leadership of our churches, corporations, and political institutions. A calling back to the sound moral, and theological teaching and reasoning we once knew in this country. Teachings that held this country together for well over 200 years now. Jesus called out the powers that be, he died at their hands, not the people’s hands. It was them he directed his words of warning too. Like Us on Facebook and also Sign up for our weekly Newsletter.

True prophetic teaching preaches the conviction of sin, the salvation of Christ Jesus, and the principles of Christian Liberty to a lost world. Our nation would be so much freer if only Christians were demanding a return to moral instruction and teaching, instead of filling their minds with speculative drivel. The obsession with prophecy speculation in favor of moral instruction and chastisement is a net loss on our society. As a result we have exactly the kind of pagan, profane and disgusting culture that sends us into the hands of God’s righteous judgment, just like the pagan nation of Israel in ancient times.

“But avoid foolish questions, and genealogies, and contentions, and strivings about the law; for they are unprofitable and vain.
” Titus 3:9

**HHA note: My posting this article is not an endorsement of all Wake The Church material and links.