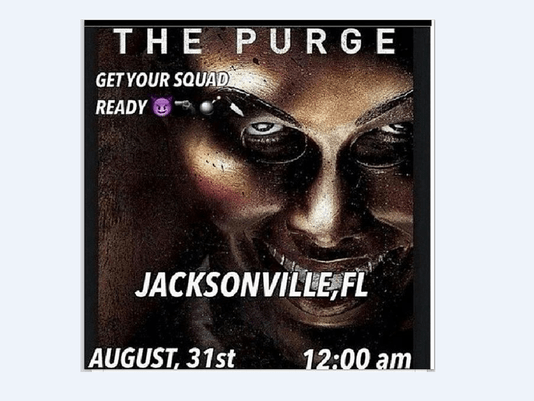 It seems that the government is behind a psyop that is being pushed nationwide right now for August 31st.  Reports are coming in from cities around the United States where flyers are being put up announcing “The Purge” and saying “Get Your Squad Ready!”  They say “The Purge” will begin on August 31st!  It’s also going out on Instagram, Facebook and other social media!

For those that don’t know, “The Purge” is a movie series that has so far had two movies – “The Purge” and “The Purge Anarchy”.  In the movies, the government allows 12 hours where any crime is legal.  You can murder anybody in those 12 hours (7pm to 7am) and do any kind of crime and and it’s perfectly legal!  Of course no emergency services will be available during the purge hours so they advise you to get off the streets if you’re not purging this year!  You can use weapons of Class 4 or lower during the purge.  The only people that you can’t murder are government employees of ranking 10 who are immune to the purge.  This was all setup by “The New Founding Fathers”  who said that the yearly purge was necessary to “Release the Beast”, keep full employment and to bring about a renewed America!

This “Purge” psyop is VERY dangerous.   Our society is so dumbed down and evil now that many gang bangers could go out and copy cat the movie and start killing people!  We must continue to resist the tyranny in a peaceful manner because God is on our side.  Let’s pray that nobody dies on August 31st over this evil government psyop to incite violence so they can crack down more on the population or bring in Martial law which is what they ultimately want.

Here’s clips from “The Purge” movies so you can see the demonic, twisted world the new world order wants to make!   This is their dream.  Law of the Jungle with them sitting on top!  Let’s all spread the truth more than ever so that the NWO doesn’t get their dream.  Go to the top of this article and get my free ebook called “How to Spread 1,000 Times more Truth” and let’s do it as a team! 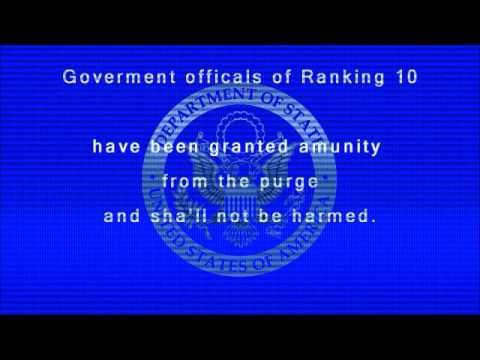 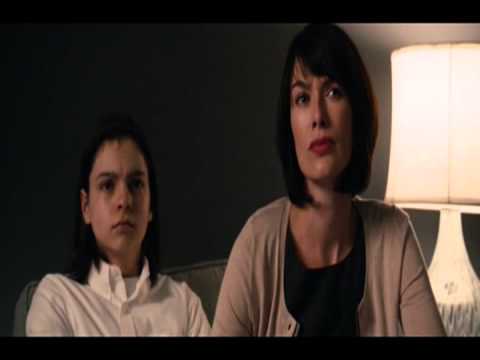 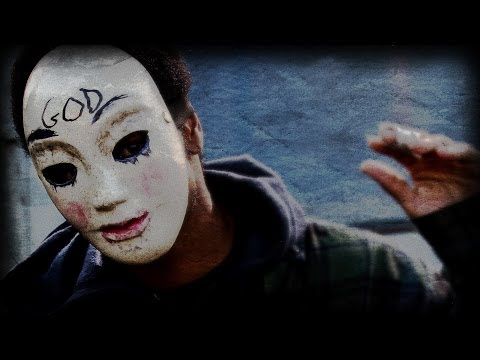 Here are links to several cities that have already been covered with flyers for “The Purge” and posts on social media.  I live near Jacksonville and this has been all over our news here.  I’m sure it will pop up in many other cities before August 31st.  Please pray that this evil does not push people to kill their fellow man and pray the people behind this psyop are caught and punished for promoting it!

“The Purge” in Jacksonville, Florida

“Don’t want my name out there but this [photo] is all over Facebook and people are actually thinking it’s real. You have any idea what this is about,” another FCN Facebook user wrote in a message.

Jacksonville Sheriff John Rutherford caught wind of the concerns and put out a statement Wednesday evening. Rutherford said there is “no credible information to indicate that this is a legitimate threat to the city of Jacksonville.”

The Jacksonville Sheriff’s Office takes all threats (or perceived threats) including those posted on social media, seriously. We are aware of The Purge posting (based on the fiction contained in a movie) and are looking into this. Obviously, we will not discuss tactics, but as with any perceived threat, we appreciate the assistance of the public in passing that along to us.

“The Purge” in Cleveland

Cleveland Police are investigating social media postings that are encouraging a “purge” later this month. A Purge is a period of 12 hours of total lawlessness..

The postings appear to be inspired by the movie, “The Purge: Anarchy.” In it, anything goes during the purge, even murder, with no legal repercussions. The postings we’ve seen warn of trouble on Ohio streets. Included is a warning to be prepared and an indication this is no game.

“The Purge” in Louisville, Kentucky

Could a Real Life “Purge” Happen in Louisville, KY This Weekend?

Residents in Louisville, Kentucky are being warned that a real life “Purge” could be planned for this weekend, and police say they are ready.

As reported by WLKY, Louisville Metropolitan Police report that posters and fliers have sprung up advertising that a ‘Purge’ crime spree would be in effect on Friday from 8:30 pm to Saturday at 6:30 am for residents in Kentucky’s largest city. Louisville MPD released a statement on the posters and fliers assuring residents that the department will be ready if there are any sort of mass disturbances.

Note by Glenn:  Please friend me on Facebook if you are a Truth Warrior!   I’m urging all truth warriors to go to Facebook and LIKE the “VT Truth Warriors” page – huge stories breaking there and we are taking ACTION!  Also get my free ebook  “How to Spread 1,000 Times More Truth” using simple tips.  Visit my Youtube channel also for VeteransToday Radio and much more!   We are being lied to by our fake news and the lies are increasing every day.  We have no more time to waste!  Let’s WIN this thing by spreading more truth!  Let’s do it together!