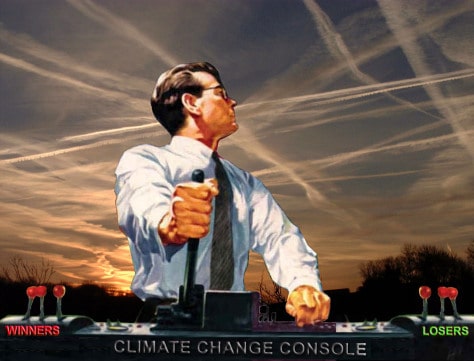 But this same technology in the hands of a globalist military authority can be applied as a weapon for creating floods, droughts and more.

The current global network of stations with ionospheric heaters and EM weather modification capability, in addition to the dozens of NEXRAD stations, is now revealed as no less than a coordinated operation of climate modification as originally organized under NASA in 1966.

The 1966 government document – National Program In Weather Modification (PDF) recruits all agencies of the federal government as a necessary participant of the weather modification agenda.

Originally envisioned as an open-sourced civilian program with “no secrets”, the advanced weather modification technologies were soon hijacked into secrecy by the military under the usual pretext of “national security”.

As a result, all administrative and department heads of federal agencies have been recruited to strict secrecy under the perversions of military authority.   This is why NASA, NOAA, FAA …etc. are under lock-step order to deny the ongoing geoengineering/chemtrails and EM weather weaponization programs as are lucidly described in proposed legislationHR-2977 (PDF) aka “The Space Preservation Act of 2001″, sponsored by rep. Dennis Kucinich, OH.

A stinging critique of the weather modification program transition from civilian to military authority is documented in draft form on the site ofFederation of American Scientists :  WEATHER MODIFICATION: THE EVOLUTION OF AN R&D PROGRAM INTO A MILITARY OPERATION (PDF)

There’s a reason why the long history of geoengineering efforts to warm the climate and polar regions is robustly documented but rarely referenced in corporate media or included in the climate change debate.

The embarrassing truth of climate manipulation lies in the multiple proposals to warm the climate for decades until – suddenly – it was discovered that CO2 could warm the arctic for free.    With no explanation, the scientific community did an about-face and lobotomy to claim that warming the climate by CO2 could be catastrophic – while,  at virtually the same time, proposals by renowned meteorologist, Harry Wexler –  to detonate H-bombs and spray chlorine in the stratosphere were being entertained as workable strategies for gaining access to ice-locked, northern latitudes.

The story of this inexplicable transition of climate agendas is revived from the memory hole in an article:  “Geoengineering and The Climate Industrial Complex”

Adapted from a post by investigative reporter Jim Lee

Kenya, 11/10/2011: In one segment, KTNK’s Dennis Okari interviews Aquiess CEO David Miles and Director of International Planning and Communication, Dr Mahendra Shah. Prior to the KTN interview Aquiess had demonstrated their capability by bringing early rainfall into the drought-declared region at the Horn Of Africa. The project to “Break the Drought” was announced in Rome on August 18th 2011.

In this statement Dr Shah says:

“We, today undertake to deliver gentle rain within the next 45 days to break and end the drought and in particular extend the coming short rainy season.”

Early rains came in and subsequent anomalous rainfall to deliver better than expected results. The rainy season was also extended beyond the normal period.

The Aquiess system can change the course of oceanic atmospheric rivers(AR) by coordinating applied resonance with satellite meteorology. The electromagnetic resonance of each station is adjusted to “hack” the atmospheric conditions to provide a path of least resistance to allow theAR flow to reach the targeted are of drought or wildfires. Since more than 90% of rain falls over the ocean, the consequences of steering a tiny amount of this precipitation over land should have little impact.

The ionospheric heater located on Long Island, NY provided opportunity to influence the path and intensity of Hurricane Sandy. It’s public information that the Department of Homeland Security had been experimenting with manipulation of tropical cyclones under their HAMP program (Hurricane Aerosol Microphysics Program)