What should our response be to the growing fascist One World Government and Religion brazenly being brought about before our eyes? Shamefully, the church again is mostly silent in the face of the uprising of heinous evil. What are the justifications?

Here is an article calling to mind the response of the church to Adolf Hitler in World War II. It seems that it’s true; Man does not learn from history.

Today, when fascism is making its appearance once again on the social map, threatening our fellow man, the leaders of the Church should not be silent. A repetition of the errors of the period between the two World Wars and pastoral indifference will lead to a crushing rejection of our ecclesiastical leaders and, perhaps, even Christianity itself.
Miltiadis Konstantinou and Efstathios C. Lianos-Liantis | 08 May 2014

But I have this against you, that you tolerate the woman Jez’ebel, who calls herself a prophetess and is teaching and beguiling my servants to practice immorality and to eat food sacrificed to idols. (Rev. 2:20).

We should begin with a persistent historical paradox: When fascism and Nazism became the dominant state ideologies in Europe, the great Christian confessions did not resist them. They did not put forward the crucified Christ as a counter to the armbands and swastikas, nor did they contrast the word of Gospel with the hate-filled speech of the fascists. They kept quiet, they went along, they blessed, but they did not oppose. And this stands—and will always stand—as a shameful chapter in the history of the dominant Christian groups of those times. The Church, however, is not (only) its hierarchical bodies and administration; the Church is, primarily, the saints and martyrs of every age. The Church was founded and will ever be founded on the blood of its martyrs; and those Christians who confessed the truth of Christ and were persecuted, imprisoned, and executed by the fascists are its modern boast. As has always happened throughout history, the Christian truth was reconfirmed by the bravery and martyrdom of a few.

No Christian confession today wants to recall Nazi collaborators or accept the timid apology of members who supported them without the criteria of truthfulness. Everyone—almost everyone, if we take into account the unique case of Cardinal Stepinac—has been condemned to oblivion. And one would that after the disclosure of fascism’s hideous crimes against unarmed minorities and the Holocaust in its entirety, the Christian world would permanently delete any ideological reference to or sympathy for it. For some, however, this remains fascism’s “secret lure.”

Despite its inherently anti-Christian stance, the lure of fascism as a movement is in how it employs traditionalistic values and “deifies” the concept of the nation (and therefore, the superego of a people), esteeming a particular society solely because it belongs to a certain racial [ethnic, cultural, etc.] group. These are the points that correspond to certain inflexible notions of a part of the ecclesiastical hierarchy, which—leaving aside the Christian message’s universal perspective and the radical equality proclaimed by Christ and his disciples—simply repeats history, and, in a completely arbitrary way, prefers to barricade the Church within the limits of the nation-state, making it hostile toward foreigners and those who are different. And precisely when Christian identity is turned into a paradox, or nullified altogether, at least for a conscientious member of the Church, one adopts a kind of fascism.

In 1933, when the fragile Weimar Republic was succeeded by Nazi totalitarianism, the National-Socialist theorists tried to construct a fake Christian confession, which would serve the fascist state machine. The main thrust of what they called “positive Christianity” essentially negated the fundamental principles of the Christian faith, replacing Christianity with a racist, neo-pagan construct, which simply used the name of Christ. Their stated intentions included the rejection of the Old Testament as Christian Scripture and the “de-Judaizing” of the New Testament (especially the Gospel of Matthew and the Pauline Epistles), the view that the Reformation was being fulfilled in the “messianic” figure of Adolf Hitler, the racial identification of Jesus as an Aryan, and the replacement of Jewish elements of Christianity with ancient German traditions and Druid myths. 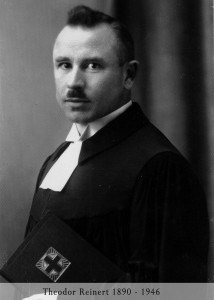 (My grandfather, Theodor Reinert. One who resisted. -yn)

A handful of German pastors, theologians, and lay people reacted to these positions, as well as to the creation of the Reichskirche, the Nazi “church,” and formed the Bekennende Kirche (Confessing Church) in an attempt to resist the growing fascism in the Protestant confession. In their Theological Declaration at Barmen, the leaders of the Bekennende Kirche noted: “We reject the false doctrine, as though the Church in human arrogance could place the Word and work of the Lord in the service of any arbitrarily chosen desires, purposes, and plans.” The leading figures in this small group of exiled Christians were herded into concentration camps and some were executed, even up to the very end of the war. Among those distinguished by the vigor of their spirit are the great Karl Barth and the “martyr” Dietrich Bonhoeffer. The subsequent vindication of the Christian resistance was not complete, however, because responsibility was never assigned to the members of the Church, the common people, who, rejecting Christian love, loved the metaphysical “I” of the nation or the race.

Christianity can be true only when it is chosen, exists, and ministers with absolute freedom, and is inspired by love, as described beautifully in Greek by Paul. Any other form of Christianity is fake, because it tarnishes the image of man as a creature of God’s love and abolishes its expression of the Word’s redemptive, loving sacrifice. Fascism is incompatible with this freedom of love—as well as with freedom of expression and conscience—and this is precisely why it cannot be Christian. The Church is the Body of Christ when it accepts and embraces everyone; the Fathers, typically, did not consider those who consciously place themselves outside the Church as adversaries, but rather as “potential” members of the Church. Fascism always operates the same way: it singles out a social group and presents it as “the enemy” in order to incite people’s emotions, trigger their instinct for self-preservation, and rally their followers. The Church—the true Church—embraces its enemies; fascism constructs its enemies, and then banishes or executes them.

In the exquisite hymn sung before the Epitaphion on Good Friday, Joseph of Arimathea beseeches Pilate to give him Jesus’ dead body with the following words: “Give me the foreigner, foreign as a foreigner from childhood. Give me the foreigner, killed as a foreigner.” The first foreigner in Christian history was Christ himself; he who in his earthly life was a refugee, persecuted, a political prisoner, who died as a criminal on the cross, talking about his “kingdom” to a thief.

The foreigner, the “other,” is a sanctified entity in the body of the living Church. He is the one whom the community of believers will help and embrace as if he were Christ himself, just as Christ said: “I was a stranger and you welcomed me, I was naked and you clothed me, I was sick and you visited me, I was in prison and you came to me….Truly, I say to you, as you did it to one of the least of these my brethren, you did it to me” (Mt. 25:35-40). Can this practice of welcoming and actively supporting the foreigner coexist with the abysmal hatred and violence birthed by fascism and similar ideologies?

Today, when fascism is making its appearance once again on the social map, threatening our fellow man, the leaders of the Church should not be silent. A repetition of the errors of the period between the two World Wars and pastoral indifference will lead to a crushing rejection of our ecclesiastical leaders and, perhaps, even Christianity itself. Indeed, Orthodoxy, which is the dominant faith in this country [Greece], was in its golden age when it identified itself with the powerless, when it chose to be persecuted for the truth. As Fotios Kontoglou beautifully describes it in one of his short essays: “The Orthodoxy of that time was like the tortured mother whose children grieved her more rather than herself being complacent. True love is what they call painful love, on which Christ founded his sweet faith.”