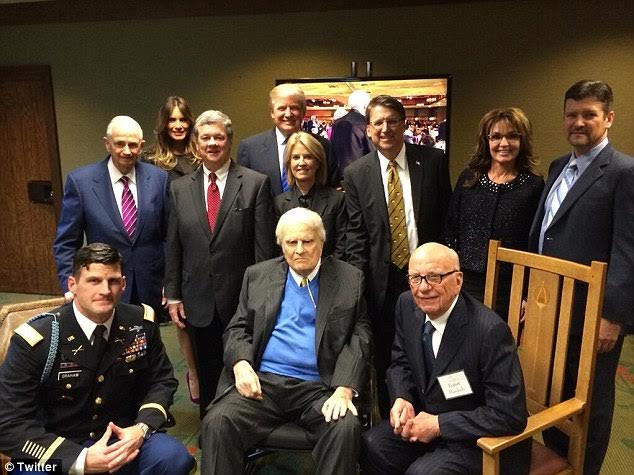 (above, Trump and Melania at Billy Graham’s 95th Birthday Party in 2013. That’s Rupert Murdoch beside Bill Graham Murdoch owns Fox TV which is “against” Trump.)

This is pretty bold, but I agree with Henry about Trump. Still, be sure to follow up with the links provided before arriving at your own conclusions. And be sure to read the comment at the bottom.

Fact # One- He is a member of the illuminati – i.e. a satanic cult dedicated to pedophilia and ritual murder. Fiona Barnett writes:

“I was trafficked to the USA, to Bohemian Grove where I was drugged & raped by the Rev BILLY GRAHAM – Richard Nixon’s pal, in a pink bubble room. I was also made to dress up like a teddy bear and play hide, seek & rape. I also witnessed the ritual murder of a person by politicians dressed up in robes. I was taken via Sydney airport, in a crate like an animal. On the way home I was drugged, raped and beaten at an exclusive, after hours, pedo gathering at Disneyworld. Yes, Walt Disney was a pedo. Why do you think the Mickey Mousketeers go nuts and shave their heads? Why did pedo ‘Whacko Jacko’ build a Neverland based on Disneyland?”

Fact # 2: His Campaign Director, Michael Glassner, used to work for the Israel lobby, AIPAC. After reading this, do you really think Trump will be “neutral on Israel” ?  Cancels debate to speak to AIPAC, “a very important group of people.”

“How does one go from serving as AIPAC’s Southwest Regional Political Director a year ago to running Donald Trump’s national political operation today?

Ever since Trump announced his White House bid last June, Michael Glassner has been serving as his campaign’s national political director. In part, he is credited with landing the coveted Sarah Palin endorsement ahead of the Iowa Caucus last month.

Glassner’s political journey began as a 20-year-old college student from Kansas when he served as Bob Dole’s traveling aide in the 1988 presidential campaign. “I became the right-hand man for the Senate Majority Leader and a presidential candidate,” Glassner related in an interview with Jewish Insider. “It was a tremendous education in politics, and that was the beginning of what became a 15-year relationship as I worked for Senator Dole in a number of capacities.” 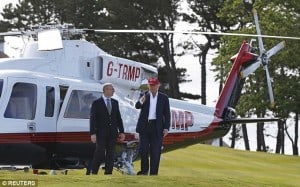 Upon moving to New Jersey in the late nineties, Glassner served as a senior advisor to Lewis Eisenberg, the then-Chairman of the Port Authority of New York & New Jersey and a prominent Republican Jewish leader [who sold the property to Larry Silverstein.] . He worked out of the Port Authority’s World Trade Center office but left just before 9/11 to join IDT Corp in Newark. Glassner credits his former boss, IDT founder Howard Jonas, whom he referred to as “a strong Zionist and an AIPAC guy,” with encouraging him to become more active in pro-Israel politics. Intermittently between 2000 to 2008, Glassner would take time off to return to the campaign trail: running George W. Bush’s general election campaign in Iowa, fundraising for Bush’s ’04 re-election effort, and in ’08, where he managed Sarah Palin’s vice presidential campaign.

“My interest in pro-Israel politics had grown exponentially,” Glassner recalled. “Particularly since 9-11, which represented a real credible threat to all Americans and in particular as a Jew, I felt very strongly about the threat of radical Islam and so I became more and more involved with AIPAC.”

In 2014, Glassner officially joined AIPAC as their Southwest Regional Political Director where, according to his LinkedIn profile, he managed AIPAC’s legislative mobilizations, conducted briefings with candidates, and spoke at political events throughout the region.

In July 2015, the phone rang. Donald Trump, a real-estate magnate, decided to run an unconventional campaign for president. Keeping senior hires to the minimum, the Trump campaign offered Glassner to join and serve as its national political director. “The Trump campaign came to me for a lot of reasons,” Glassner told Jewish Insider regarding the recruitment process. “I think they were looking for somebody that had experience in presidential politics and who was already in the area, and I live in New Jersey.” And, of course, there was the Sarah Palin factor. … 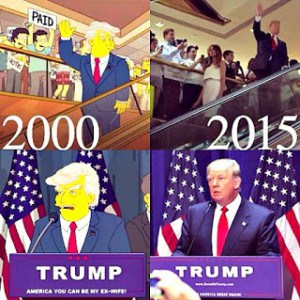 Glassner pointed to Trump’s robust statements against the Iran deal as a clear example of where he stands on Israel. “One of the things that Mr. Trump talks about, almost every single speech he gives, is how bad the Iran deal is,” Glassner maintained. “And he uses that as an example for a lot of reasons. One is, I believe it encourages Iran’s bad intentions toward Israel. Secondly, it’s an example of what bad deal making and poor negotiations can result in. I don’t think it directly speaks towards his policy on Israel but it makes it clear that he recognizes that Israel is our most important ally in the region and through poor deal making the current administration has endangered that ally and that is unacceptable and has, in essence, said that many times.”

“I don’t think there can be any question about his steadfast support for Israel,” Glassner declared just hours before Trump suggested he would be “neutral” on the Israeli-Palestinian conflict. “I would not be working here if I didn’t believe that that was held by the candidate himself. It’s very important to me, very important to him and the country.”

Holy cow Henry, I can feel the volume of e-mail you must be receiving calling you everything from an anti-Semite to Satan himself. The Trump loving Neo-Cons and Christian Zios must be spitting fire over these latest revelations you have brought to light. Palin, Graham, Murdoch, all hero’s to the uninformed Israeli loving Trotskyite Neo-Cons. Trying to make us believe everything’s all right even though it’s all wrong.

Being raised Southern Baptist it was had for me when learned how Billy Graham was basically a nobody until Hearst gave the orders to “Puff” him. In Grahams own words. ” Evangelist Billy Graham recalls .. in his new book the pivotal point in his young ministry when, during a 1949 Los Angeles crusade, a two-word directive from publisher William Randolph Hearst to “Puff Graham” (meaning, give him great publicity) made him an Instant Celebrity Nationwide. It is widely written and known that ‘Hearst the Freemason’.. (not Jesus the Christ) .. made Graham a Superstar through his Newspaper.

For me this was just the beginning of my education. With help from people like yourself I was able to pull the scabs from my eyes and see the truth. After many years I have learned nothing ever changes for the good because it is a rigged game and all the power elites serve Satan first and themselves second. You will never make the top layer in Religion, Politics, or Even the Military unless you serve the Illuminati and Satan.

As Guy Carr points out Satan is the prince of this world, and you will never make it to the top and STAY there unless you serve him.
– See more at: http://henrymakow.com/#sthash.g4TmLFnk.dpuf