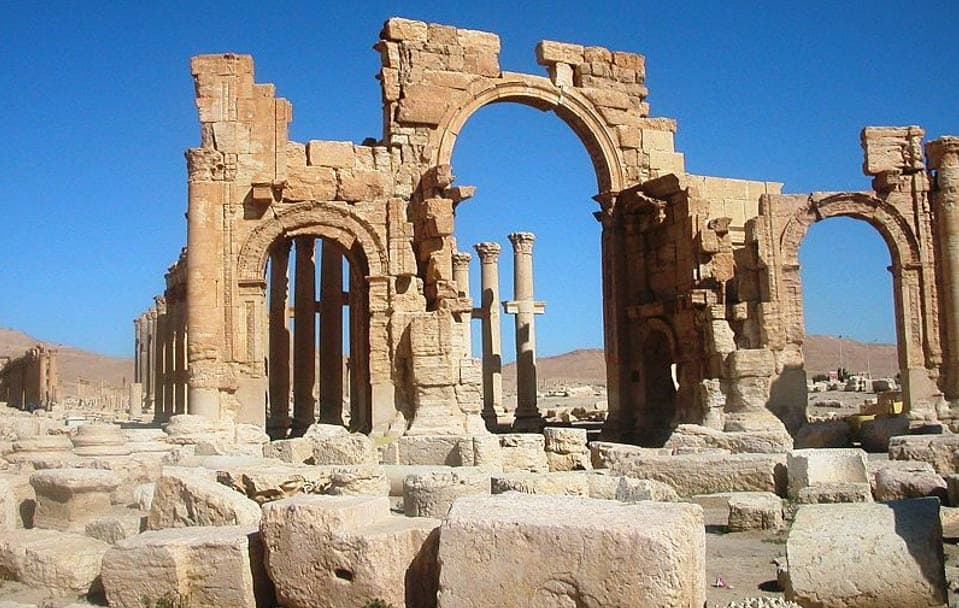 This is a very informative article even though it comes from a site run by Talmudic Zionists. Kabbalah is the source of Talmudic Judaism and virtually all occult religion, yet the author purports to “expose” the occult behind Palmyra and CERN. This also builds on yesterday’s (lengthy) post about Alexander Dugin, Torah Jews and the mass chaos & confusion they’re creating.

A recent display in Switzerland brought together elements of a New World Order, Idolatry, and experiments in Quantum physics.

Ten days ago, a 20 foot-tall replica of Roman Victory Arch of Palmyra was unveiled for a 12 day display in Bern, Switzerland commemorating the 70th anniversary of the Swiss Commission for the United Nations Educational, Scientific and Cultural Organization (UNESCO). The date seems random however June 21 is the summer solstice, a major day in the calendar for the form of idolatry which focuses on sun-worship.

It’s current location in Bern brings it to within 100 miles of The European Organization for Nuclear Research, known by the acronym CERN, which operates the largest particle physics laboratory in the world. CERN performs the most cutting edge experiments in quantum physics, some of which are quite controversial. In 2009, Sergio Bertolucci, Director for Research and Scientific Computing at CERN, briefed reporters about some of the possible implications of an experiment labeled AWAKE. He speculated that the experiment could possibly open portals into the “unknown”.

“Out of this door might come something, or we might send something through it,” Bertolucci was quoted as saying.

Other experiments raised concerns that black holes might suddenly appear with unknown consequences.

Despite being an institute dedicated to scientific research, visitors to CERN are greeted at the gate by a large statue of the Indian goddess Shiva. A gift of the Indian government, the statue is described by the institute as a metaphor comparing the cosmic dance of the Nataraj and the modern study of the ‘cosmic dance’ of subatomic particles. The official explanation fails to mention that in the Indian pantheon, Shiva is known as the destroyer.

It should be remembered that Palmyra, the home of the original arch for two millennia, was a major center for idolatry, specifically the worship of Ba’al, also known as Moloch. Mentioned more than 90 times in the Bible, most notably when Elijah defeated the priests of Ba’al in a contest to bring down fire from heaven to burn a sacrifice, Ba’al became the archetypical form of idol worship. Pantheistic, his adherents worshipped Mother Nature while denying the existence of a creator. Followers of Ba’al engaged in bisexual orgies and sacrificed human infants, burning them alive. Anthropologists conjecture that the child sacrifice was to cull the population after the inevitable outcome of wanton sexuality.

Palmyra was dedicated in 32 CE to the worship of Bel. Lower levels of the ground underneath the Temple of Palmyra indicate human occupation that goes back to the third millennium BCE. Converted into a Christian church during the Byzantine Era, parts of the structure were modified into a mosque by Muslims in 1132. It remained in use as a mosque until the 1920s.

In addition to being rooted in idolatry, the recreated arch is emerging as a symbol for world government, reappearing in several venues hosting world government summits. It was erected to inaugurate the World Government Summit in Dubai in February 2017, an event that brings together leaders in business, technology, and politics from around the world. The arch was then erected in Italy in May 2017 for the G7 Summit, a meeting of the leaders of the seven largest economies in the world representing more than 64 percent of the net global wealth.

Rejecting idolatry should be a universal concern. Judaism does not desire for non-Jews to convert to Judaism but the third Noahide law is a prohibition against idolatry.

Also known as May Day, Beltane is an Anglicized reference to the god “Ba’al.”  An annual Beltane Fire Festival is held in Edinburgh and in other parts around the globe as part of ancient Gaelic culture. In an unfortunate misunderstanding of the festival’s roots, they are frequently billed as family events, with children being given special discounts.

The IDA and UNESCO have paired up in other projects presenting symbols of idolatry. In November 2017, a statue of the pagan goddess Athena was reconstructed by the IDA and presented at an exhibit “The Spirit in the Stone,” at the United Nations’ headquarters in New York City. The exhibit described Athena as “synonymous with reason, refuge and the rule of law, all of the same values on which that historic institution was built,” but the spear lying at the statue’s feet belied her more common association as the goddess of war. Some scholars believe the Greek goddess was based on the Mesopotamian goddess al-Lat.

The original arch was destroyed by the Islamic State (ISIS) in October 2015, but one year later, the Institute for Digital Archaeology (IDA) used 3-D printing technology to reproduce a 20-foot  full-scale replica. Before the outbreak of the Syrian Civil War in 2011, Palmyra was a popular tourist attraction, drawing 105,000 visitors a year.


Am I missing anyone?

This is chaos, mass confusion.

It brings protocol #5 to mind again.

“In order to put public opinion into our hands we must bring it into a state of bewilderment by giving expression from all sides to so many contradictory opinions and for such a length of time as will suffice to make the [average person] lose their heads in the labyrinth and come to see that the best thing is to have no opinion of any kind in matters political.” ~ Protocol #5