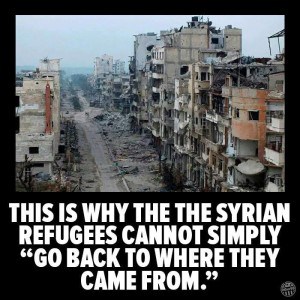 I was recently on a four-man panel about Syria–I may have been the only one who had not been there.  My topic was Use your own common sense in weighing the news, whatever the source.  Most of the audience were heartbroken about the Syrian refugees and seemed to agree with me.  Where information is not dependable, we must use our instincts and examine the basic premises of media, reporters, and politicians, and rely upon our own judgment to straighten out the news.

The crowning question about Syria has little to do with how good or evil the ruling Assad family.  Nor is it about the fairness of Syrian elections.  It is not about whether the people would be better off with or without Bashar Al Assad, for it should not be the American purpose to decide who runs each government.  But we deserve to know whom our government is supporting and why, and Syria vs. ISIS is a good test of why only our common sense, not the media, can save us.

A new political group called ISIS (also called ISIL or Daesh in Syria) is a threat to the whole world, we are told.  So violently Islamic is it that we must be prepared to defeat it or it will come here.  We are also told the Assad “regime” in Syria is opposing it but is losing, which is why there are millions of Syrian refugees, with more homeless still inside Syria.  We are told the US is now bombing ISIS in Iraq and Syria, even though our leaders are demanding an end to the “Assad regime,” and we are supposed to believe that our President has sent a handful of special force Americans to Syria to help other “moderate” groups that are also opposing both ISIS and the “regime”.  So the US  admits it is bent on eliminating  both ISIS and Assad, supposedly planning a different and more democratic government so the refugees can return home.

We can also verify through Russia’s media that it is in Syria, bombing all groups that oppose the Assad government.  Our own government confirms this, therefore there is now a chance that Russia may bomb kill the Americans “advising and training” in Syria, and Russia will certainly destroy some equipment the US provides to the “moderate” Assad opposition. Russia has called these US special services, “human shields” to prevent Russia from bombing the opposition that the US is backing.

We are also told–or it is richly implied–that ISIS has lots of money and hires volunteer fighters from all over the world, including from the UK, USA, and Europe; that ISIS is an orphan army that has no national homeland nor any land of origin.  Nevertheless, we are given to believe it is a formidable fighting force, even against our own military might. Obviously this implies that ISIL has lots of money and resources to spend on war.  So what is the source of these funds?  This part gets tricky.

One example of the ISIS dollar deception is found in one of my most reliable sources of business information, London Financial Times.  It produced a series of stories about how ISIS is funded.  “ISIS Inc: How Oil Fuels the Jihadi Terrorists,” is authored by three members of FT.com  prestigious London staff, complete with impressive maps of oil fields and refineries. The story tells us ISIS has captured and runs an oil field with the help of imported petroleum engineers and technical staffs.  ISIS is said to sell the products through free lance black market truckers, who supposedly queue up “for miles,” driving away with loads of refinery products which are hauled by road to Iraq and peddled.  The imaginative and fanciful story tells us the the Assad government actually buys products from this enemy, financing its own demise.  It’s a spellbinding story line, but what is wrong with it? The answer is obvious to someone who thinks a little for himself.  Refined gasoline–and even crude oil–burn very well.  If truck convoys full of oil were crossing the desert on roads to Iraq, or any other road, the US drones would find the convoys in a heart-beat.  Trucks full of fuel make a dandy blaze in the night!  That is if the US is really bombing ISIS as they claim to be!  Some will recall the “Highway of Death-Iraq” from Kuwait City to Basra, Iraq, 1991?  Search it on Wikipedia, you will see photos of what happens when a convoy of trucks get caught on in  bombing.  Please recall that Sadam Hussein’s Republican Guard, was said to be upwards of 80,000 men, were completely destroyed on the desert of Kuwait in what we called Operation Desert Storm, which had occupied Kuwait in January 1991.

So one of the two stories we are told has to be a myth:  either the USA lies when it tells us it is bombing ISIS, or the refinery story is the yarn!  And if ISIS is not financing its war by selling oil, it must have another, hidden source of income.  Is the USA lying about bombing ISIL or did Financial Times dreaming up its more fanciful version of this old story about ISIL’s refining operations?  Either way, we are not getting the truth, and only our sense of reasoning can guide us.  If not oil, who is financing ISIL?  In either case this suggests that ISIS is an ally, not an enemy!  Absent Petro-income, ISIS has unlimited  funded from some home base, which assures it plenty of modern war machinery, and seemingly unlimited cash dollars.  Note ISIS has no currency of its own nor any bank, like Syria’s Central Bank, that we know of.  Simple logic dictates that the USA is faking the fight with ISIS, wishing it to destroy the Assad.  Is it possible that the USA is only pretending to fight ISIS, who they do not want to win because they have thier own idea of how to govern Syria? Is this like Iraq, Afghanistan, Sudan, and Iran?  And is it possible ISIS has a home base of operation in the Middle East that supplies it to keep it going and does their banking for them?

This is where common sense comes into play. Can the cartoon that depicts ISIS as a product of the CIA possibly be right?  Can it be funded and supported by oil-rich US allies in the ME.   This question splits into two more questions, which are:

How can ISIS pay for attracting and paying volunteers world wide?

The common sense answer is more like this:  ISIS has big money to spend paying mercenaries who may be motivated by a modicum of anti-US fanaticism, but still must be paid. And Pan Am and Delta require big fares to bring in volunteers from London or New Your by airplane. Blackwater combat mercenaries claim to receive upwards of a quarter million dollars a year!  It must cost a bundle to assemble 5-10,000 mercenaries.

All the arguments about how ISIS finances itself evaporate in smoke when common sense is apples to the official stories.  It seems clear that the US fight with ISIS is a fake fight.  It also seem clear that ISIS is getting its money like all armies do, from back home, and that means the USA and/or its surrogates in the ME. So who are the US allies in the ME?

Stepping back to where we began, a common view of the four-man panel on Syria, held at a church interested in how to save the refugees they see on TV.  Retired Denver University International relations Prof, Robert Prince, who is a ME specialist with vast experience who longs for a diplomatic solution, spoke out.  His professional view fell not far from my common sense evaluation, and deserves to be read.  (link)

Only Saudi Arabia and Israel can be the true Godfather of ISIS, and the latter is pretty much ruled out for obvious religious reasons.   But Saudi Arabia and ISIS have one common trait that pretty much seals the deal under common sense logic:  the Saudis and ISIS are the only professing Muslim states (if you want to call ISIS a state) that practice a unique form of Islam (Wahhabi) that beheads its political prisoners!  This year Saudi Arabia has beheaded upwards of 151 humans at last Wikipedia count.  ISIS has publicly beheaded an unknown number.  Both say they do it in the name of God.- cec