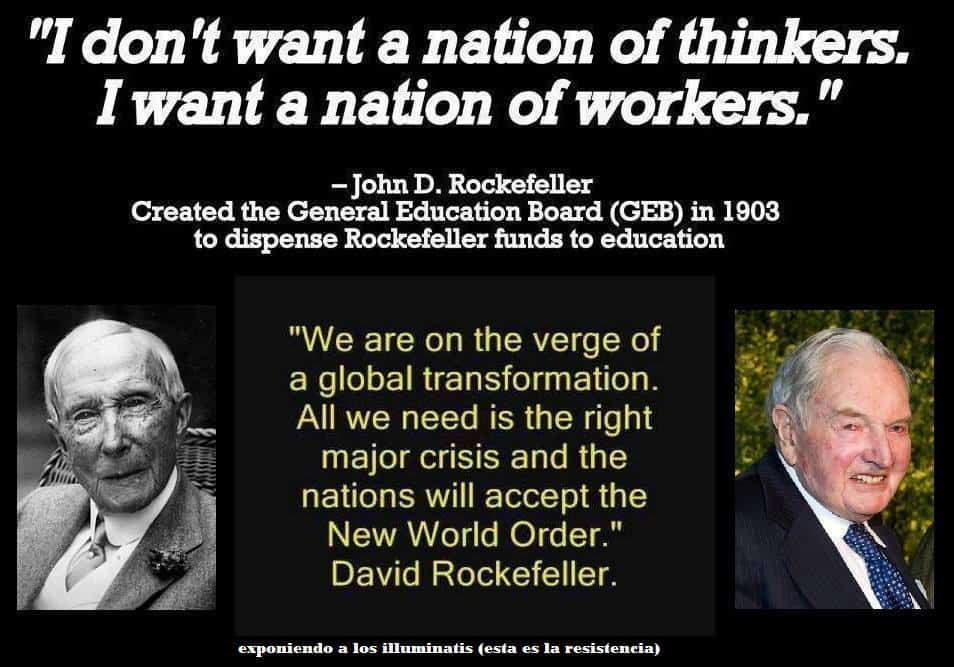 Wake up to the Rockefeller movie of political reality

The key document here is the 2010 Rockefeller Foundation brainstorming exercise, “Scenarios for the Future of Technology and International Development”.

It imagines various disasters and possible responses to them.

The report presents a friendly and concerned front, but reading between the lines, you can see Globalism at work, shoring up a new and improved international order—as if that solution is the only viable future for humanity.

Here is a choice bit of scenario-building and forecasting from the report:

“In 2012, the pandemic that the world had been anticipating for years finally hit…national leaders around the world flexed their authority and imposed airtight rules and restrictions, from the mandatory wearing of face masks to body-temperature checks at the entries to communal spaces like train stations and supermarkets. Even after the pandemic faded, this more authoritarian control and oversight of citizens and their activities stuck and even intensified. In order to protect themselves from the spread of increasingly global problems—from pandemics and transnational terrorism to environmental crises and rising poverty—leaders around the world took a firmer grip on power.”

Ah yes, the favorite phony stepchild of the Globalists: a pandemic. Forget the fact that every dire prediction of worldwide destruction from a dreaded virus, during the past 15 years, has fallen flat. SARS, Swine Flu, West Nile, Bird Flu, etc. Duds.

Here’s another preposterous Rockefeller future, from the viewpoint of 2010:

“Sea levels were rising fast, even as countries continued to build-out coastal mega-cities.”

“In 2014, the Hudson River overflowed into New York City during a storm surge, turning the World Trade Center site into a three-foot-deep lake. The image of motorboats navigating through lower Manhattan jarred the world’s most powerful nations into realizing that climate change was not just a developing-world problem.”

Now read further, to get a flavor of the Rockefeller solution to the “climate disaster.” Notice that an international order, and NOT separate nations, is required:

“In such an interconnected world, where the behaviors of one country, company, or individual had potentially high-impact effects on all others, piecemeal attempts by one nation here, one small collective of environmental organizations there, would not be enough to stave off a climate disaster – or, for that matter, to effectively address a host of other planetary-scale problems.”

“But highly coordinated worldwide strategies for addressing such urgent issues just might. What was needed was systems thinking – and systems acting – on a global scale.”

“International coordination started slowly, then accelerated faster than anyone had imagined.”

“In 2015, a critical mass of middle income and developed countries with strong economic growth publicly committed to leveraging their resources against global-scale problems, beginning with climate change. Together, their governments hashed out plans for monitoring and reducing greenhouse gas emissions in the short term and improving the absorptive capacity of the natural environment over the long term.”

“In 2017, an international agreement was reached on carbon sequestration (by then, most multinational corporations had a chief carbon officer) and intellectual and financial resources were pooled to build out carbon capture processes that would best support the global ecosystem. A functioning global cap and trade system was also established.”

“Worldwide, the pressure to reduce waste and increase efficiency in planet-friendly ways was enormous.”

Now here is the big one, with technocracy as the master:

“New globally coordinated systems for monitoring energy use capacity – including smart grids and bottom-up pattern recognition technologies – were rolled out. These efforts produced real results: by 2022, new projections showed a significant slowing in the rise of atmospheric carbon levels.”

“Inspired by the success of this experiment in collective global action, large-scale coordinated initiatives intensified. Centralized global oversight and governance structures sprang up, not just for energy use but also for disease and technology standards. Such systems and structures required far greater levels of transparency, which in turn required more tech-enabled data collection, processing, and feedback.”

“Enormous, benign “sousveillance” systems allowed citizens to access data – all publicly available – in real time and react. Nation-states lost some of their power and importance as global architecture strengthened and regional governance structures emerged. International oversight entities like the UN took on new levels of authority, as did regional systems like the Association of Southeast Asian Nations (ASEAN), the New Partnership for Africa’s Development (NEPAD), and the Asian Development Bank (ADB).”

Are you following this? The monitoring of energy use, for example. This is nothing less than moment to moment tracking of energy production and consumption, planet-wide.

It’s the ultimate top-down force. What flows from this position is the ALLOCATION of energy to every nation—and, up the road, TO EVERY HUMAN.

“Mr. Jones, your energy-use card shows you’ve reached your limit for this month. Ten days left until February 1. All your energy-producing devices and assets will shut down now. Have a nice day.”

You don’t think that could ever happen? There is no way to assign energy-use limits to nations without directly impacting use by individuals.

I also hope you noticed the reference to emerging “regional governance structures.” The takeover of separate nations by the UN, the EU, and other unelected bodies.

This is the preferred and mandated Rockefeller solution.

And now a word about the hated and loved Donald Trump. Whatever you think of him, he raised the issue of Globalism, front and center. He shot down the Rockefeller TPP treaty. He didn’t sign the Paris Climate pact. He emphasized nationalism, as opposed to internationalism. He mocked climate-change “science.”

For the moment, let’s assume the very worst. Trump didn’t mean anything he said. He was a liar, is a liar, and will be a liar. He was actually put in office by the Globalists, who wanted a ludicrous enemy to play off of. He wasn’t and isn’t an enemy of Globalism. He’s a complete fraud. By relentlessly attacking Trump, the Globalists will defeat their “last opponent,” and in the next election they will sweep into power as never before, believing they can then complete their plan for worldwide domination. Let’s assume all this.

Nevertheless, millions and millions of people have become alerted to this thing called Globalism as a destructive force with a covert agenda of planetary control.

Observers can go full-bore gloom and doom, claiming it doesn’t matter. They can bitch and moan about how nothing has changed. They can confirm their own personal prophecy of failure along all fronts.

Or they can try to wake up more people to what Globalism is really all about.

The freedom to take destiny into their own hands.

That idea is not dead. It will never be dead.

THE INDIVIDUAL is at the very bottom of the Globalist plan. He is considered to be a fly in the ointment who needs to be eradicated, in favor of The Group.

He is considered to be an extinct evolutionary appendage.

That is why the Globalist superstructure must be defeated.

An individual is better than a nation.

A free individual is better than a sleeping individual.

This is where it all starts.

This is where it has to start.

It doesn’t start with a global glob of fantasizing utopians, who are unaware they’re acting on behalf of an Earth Empire.