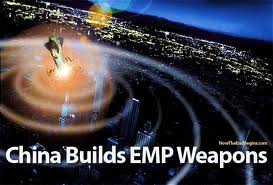 In an interview I conducted with Dr. Jim Garrow on May 4, 2014, the ex-CIA official was adamant that the Chinese plan to use EMP weapons against the United States in order to bring any organized resistance to a complete standstill. A widespread EMP attack, precipitated by a pair of high altitude nuclear weapons over the midcontinent United States, would knock all electronics that were not previously and purposefully hardened against such an attack. The effects of such an attack would greatly reduce the population. Millions would die in the first few minutes. Over the next two years, 90% of the US population would perish largely due to their inability to obtain food and clean drinking water.

Alex Jones Was the First to Report the Missing Nukes

Back in late August of 2013, a potentially devastatingly event  transpired at a base located in West Texas as the result of an unauthorized Nuke transfer. There was no signature required for the transfer and this transaction was totally off the books, thus, making this a black ops activity. The black ops activity involved the unauthorized transfer of three nuclear bombs presumably to use as an EMP weapon.

Initially, the Jones report seemed to lack specific documentation. However, on the same day of the Jones report, Senator Lindsay Graham (SC) , stated that if we did not immediately go to war with Syria, that Charleston Harbor would be nuked. In the midst of Graham’s stunning prediction, he appeared to be disorientated and a man who was under severe duress. Graham may be a globalist insider, but he did not sign up to have his own backyard nuked. The Graham statement provided instant credibility to the Jones report of nukes on the loose.

The following was a synopsis of Jones’ report on this event.

As we now know, the nuke that was potentially targeted by Charleston was intercepted by our military, seized from the black ops force who obtained unauthorized possession of the nuke and detonated it almost 500 miles out to sea.

President Obama’s subsequent actions lent even more credibility to key elements of the Jones report as he began disassembling the nuclear command structure in the United States military by firing the two top generals in charge of America’s nuclear weapons and then letting go of over 30 top military officers in charge of security for the nukes controlled by this country. These brave officers provided intelligence information so that the nuke could be intercepted and destroyed and they paid for their patriotism with their careers.

Using a Sledgehammer to Kill a Fly

In the 9 months following the stunning Jones revelation is that Alex discovered the fail safe plan to devastate this country’s infrastructure should America not go quietly into the night. It is likely that Charleston was not under immediate threat of a generalized high altitude nuclear detonation resulting in an EMP attack. It is also likely that Senator Graham did not know that these nukes were part of a contingency, doomsday plan.

New revelations clearly demonstrate that the Chinese do intend to use EMP weapons to subjugate the United States. However, these EMP weapons will be local and leave most of America’s infrastructure intact. A limited EMP attack makes a lot more sense, from a Chinese perspective, because the Chinese acquisition of the Federal Reserve (as reported in Part 2 of this series) and their ability to extract mineral wealth from beneath the ground would proceed unimpeded if smaller, more localized EMP weapons were to be used.

I have surmised that the Chinese must have developed more sophisticated EMP weapons; weapons that could be directed at specific targets and not totally destroy the surrounding infrastructure and this is exactly what I found.

A declassified intelligence report, obtained by the private National Security Archive, provides details on China’s EMP weapons as well as the plans for their use.

The report details how much of China’s military is developing EMP weapons that the Chinese plan to use against  targeted U.S. aircraft carriers with regard to any future conflict over Taiwan. Parts of the National Ground Intelligence Center study on the lethal effects of electromagnetic pulse (EMP) and high-powered microwave (HPM) weapons revealed that the arms are part of what China refers to as the “assassin’s mace”. This  arsenal of EMP weapons allows a technologically inferior China to defeat U.S. military forces while leaving much of the surrounding infrastructure intact. The report further states “For use against Taiwan, China could detonate at a much lower altitude (30 to 40 kilometers) … to confine the EMP effects to Taiwan and its immediate vicinity and minimize damage to electronics on the mainland.”

The  once labeled “top secret ” report, revealed that Chinese military writings have emphasized the importance of building low-yield EMP warheads. The report said that future Chinese EMP weapons should emphasize developing “any low-yield strategic nuclear warhead (or tactical nuclear warheads) could be used with similar effects. The DF-21 medium-range ballistic missile was prominently mentioned as a platform for the EMP attack against a country such as Taiwan”.  Of course, this strategy has definitive applicability in its use against the United States.

According to the report, this “trump card” or “assassin’s mace” weapons that are based on new technology, has been developed in high secrecy. Trump card would be applicable if the Chinese have developed new low-yield, possibly enhanced, EMP warheads, while assassin’s mace would apply if older warheads are employed, the report said.

The Chinese Are Producing EMP Weapons Which Target Humans

Americans have been told by our corporate controlled media that EMP weapons will have no impact on human beings. These reports are a bold faced lie as this same report went on to detail how the Chinese have conducted EMP tests on mice, rats, rabbits, dogs and monkeys.  The results of the mammal directed EMP test results produced eye, brain, bone marrow and other significant organ injuries. It stated that “it is clear the real purpose of the Chinese medical experiments is to learn the potential human effects of exposure to powerful EMP and high-powered microwave radiation.”  The report also concluded that these human based EMP tests may have been conducted to determine safety or shielding standards for military personnel or weapons.

My sources tell me that Chinese plans for nuclear EMP strikes against the United States are part of Chinese military doctrine and there is also evidence that China has already developed a set of super-EMP nuclear weapons that produce powerful EMP fields, but with EMP related effects that can be contained to specific geographic locations. There is no doubt  that the Chinese are perfecting task-specific EMP weapons to a degree that is now known outside of classified circles.

The Chinese Solar Energy Zones are no doubt part of the Chinese plans to  employ a localized EMP strike against America designed to disable its command and control as well as any local military forces which would resist a joint Chinese/Russian takeover of the United States. The missing nukes, as reported by Alex Jones, are the fail safe component of this plan.

Part four of this series will examine the operational details of the deployment and use of these weapons in combination with other attack strategies.