Far beneath the ground, the federal government owns the rights to mineral and energy leases, from which they receive no royalties, rents, and bonus payments, states the Institute for Energy Research, an industry group. According to their estimates, the government states that the assets are worth $128 trillion. Some estimates double the Institute for Energy Research’s estimate of underground mineral wealth. This wealth will never be used to pay down our debt.  This is an American asset that has been given away to the Chinese. This asset no longer belongs to the people of the United States. It was pledged to China as a first step in the total takeover of this country. And this vast mineral wealth is merely the tip of the iceberg with regard to what some our leaders have pledged to the Chinese

Why would the Chinese be dumb enough to even purchase a significant portion of our $17 trillion dollar debt? Why would any country purchase a debt from a single country when that debt is more than 25% of the entire value of the planet? In this scenario, where is the return on investment? This would be a totally foolish financial move by the Chinese and just the simple math alone, would suggest that the Chinese own as much of our debt as they do. Yet, the Chinese are still purchasing our debt, why? And I have to agree with the rumor mongers about one thing, there is something of ours that is of enough value to get the Chinese to continue to throw good money after bad.

This discussion can go no further until we mention that trip that Hillary Clinton took to China, several months ago, and she did come away with a guarantee that the Chinese would continue to purchase our debt. Short of performing a lap dance for the Communist part leadership, how in the world could Hillary ever get the Chinese to agree to what seems to be such a one-sided deal? In other words, this internet rumor, regarding the collateralizing  of our homes, does indeed have some basis in fact because something is collateralizing the Chinese actions as they continue to bail out water on a sinking ship with no hope of realizing a return on investment from a monetary standpoint.

Back in January of this year, World Net Daily reported that former Secretary of State Hillary Clinton did indeed go to China for the express purpose of convincing the Chinese to continue to purchase our debt. With our economy in the mess that it is in, that had to be one tough sell. There can be no question that the Chinese had to be promised something really, really, really big to continue investing in the sinking American economy.

I completely understand why many people would jump to the conclusion that Clinton pledged the homes of American citizens and I believed that this promise was made. If you do not believe this statement, then please read the previous four parts of this series and see how the Chinese and their consortium interests are gobbling up control over the Federal Reserve through controlling the Federal Reserve’s investor banks. If the Chinese will soon control the banks, they will soon control your home mortgage. Do you get it now?

World Net Daily got it right this past January. However, most of us have underestimated the degree of takeover that the Chinese have planned.  We falsely reasoned that private debt is not public debt and the United States government has taken no overt legislative power, nor have Executive Orders been issued that could hand the Chinese direct control over homes. Were we ever wrong. The evidence for the totality of the Chinese takeover of every American asset is hiding in plain sight. If Obama and Reid are willing to hand the Chinese $128 million dollars of underground mineral wealth, control over solar energy and the ability to neutralize any American military opposition, then why not just hand them the entire country at the same time. Well, that is exactly what Obama did!

There is no doubt that the Chinese are being granted authority to control our international inland ports in which eventually all commerce will flow through. If the Chinese own the Inland Ports, then they own the American trade system, by default. This is a likely asset that would have been pledged by Clinton as well. However, if I was taking on a debt the size of the United States, I would think bigger and the Chinese are thinking much bigger.

All Material and Human Capital

I have written extensively on Executive Order 13603. This EO sets up the most draconian martial law authority on the planet. Literally, everything is controlled by the government. All food, all industry, all energy and you are controlled by the President. The interesting thing about EO 13603 is that does not require an emergency declaration to be acted upon.

It is becoming clear that the Chinese control of our vast underground mineral resources  is just the tip of the iceberg. Our focus on the Chinese takeover of our mineral resources, the establishment of Solar Energy Zones in order to dominate our power grid, the Chinese plans to use localized EMP weapons in order to neutralize key military bases that are adjacent to these new Solar Energy Zones is just the tip of the iceberg. The Chinese plan to dominate every single bit of American wealth in repayment for the U.S. debt owed to China is where our collective focus should have been.

We in the alternative media have grossly underestimated the totality of the Chinese takeover of the United States.

They Want It All

Previously, I believed that EO 13603, which was the brainchild of the Obama administration which was designed to grant this President unlimited control over U.S. assets. I further believed that this EO would allow Obama the flexibility to indefinitely occupy the White House. However, I had set my sites to low with regard to Chinese intentions. Harry Reid and Obama have not just given away our solar energy and our vast mineral resources to the Chinese, we have given away everything to them. 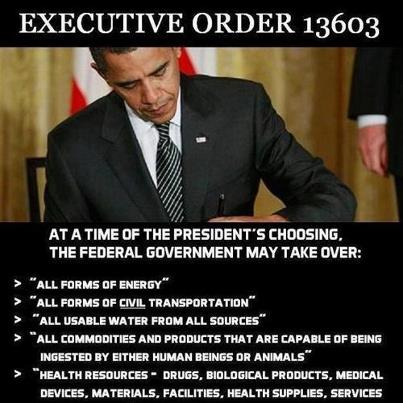 A review of EO 13603 reveals that a Chinese controlled puppet President (i.e. Obama of Clinton)  not only can seize every material asset in the country, the Chinese can seize you and your family and assign anyone and everyone to duties of his choosing.  An examination of this EO reveals that the “new draft” would be controlled by the Secretary of Labor. The military draft would be administered by the Selective Service as it always has been done. The civilian draft will be overseen by the Secretary of labor. Can you now fathom the implications of this EO? If not, please allow me to spell it out for you.

WE HAVE OFTEN SPOKEN ABOUT THE EVILS OF CHINESE SLAVE LABOR IN WALMART FACTORIES IN CHINA. THE CHINESE ARE COMING TO AMERICA TO REPAY THE FAVOR. WE WILL SEE AMERICAN SLAVE LABOR CONTROLLED BY THE CHINESE.

EO 13603 is the whole enchilada. I have written four articles on different aspects of EO 13603 and I would suggest that everyone spend some time Googling this EO and come to your own conclusions. I think there is no doubt that it would take this type of pledge to keep the Chinese from withdrawing their support and it would be a good deal for them. If I could own all of America, including its people, in perpetuity, I would certainly make the deal the Chinese have apparently made with Hillary Clinton President Obama.

Handing over all capital resources to the Chinese, including human capital, makes a great deal of sense because this is the one thing that Clinton could have pledged which might have convinced the Chinese to continue to purchase our out-of-control-debt. If only our homes had been pledged to the Chinese as collateral for their investment in our debt, that would have been the deal of the century for all Americans.

If you are still playing mental catch-up, let me make this clear. The Chinese own every asset that you mistakenly think is yours. More importantly, they own you and your family.

Can it get any worse? Yes! Think gun confiscation to minimize the resistance to the Chinese takeover and this will run hand in hand with the NDAA.