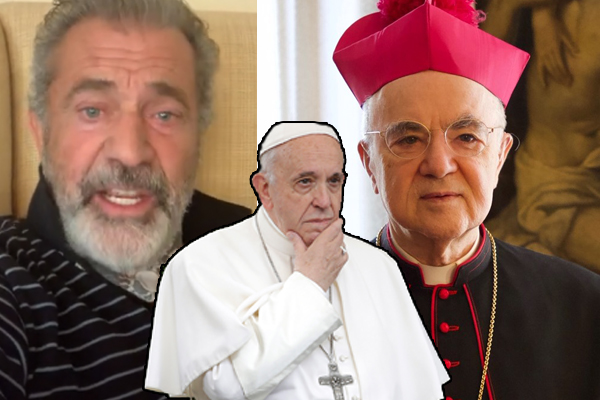 Archbishop Carlo Maria Viganò has long been an outspoken critic of Pope Francis, and the “parallel counterfeit” / “aberrant” element of the Roman Catholic Church (RCC) that stands opposed to the Church’s traditional teachings on faith and morals. Mel Gibson (The Passion of The Christ) recently published this brief video in support of a group calling itself the “Coalition for Cancelled Priests”; a group who has fallen victim to this element. 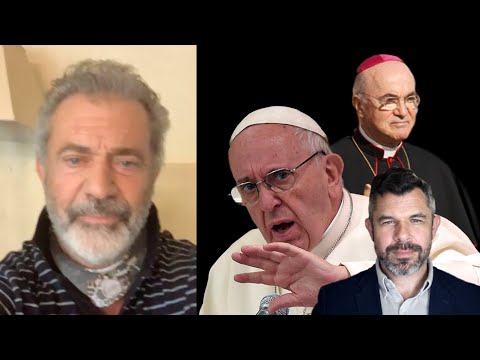 In this Sept 18 interview, Viganò spells out everything we already know about the true purposes of “COVID vaccinations,” “Climate Change,” Freemasonry, and the complicity of the Pope (who Viganò simply calls “Bergoglio”) in the establishment of a tyrannical/communist New World Order.

“We Are At War, A War That Is Not Openly Declared” Archbishop Carlo Maria Viganò (2:20)
Here’s an Overview:


Listening to Viganò makes you want to stand up and cheer! We’ve been inundated with lies about these poisonous injections for so long that someone in the height of power honestly speaking out about what’s going on is a breath of fresh air!

…But hold back on the applause for just a minute. We need to really think this through.

Always keeping the spiritual nature of the battle at the forefront, believers, must consider the spiritual position/message of those we align ourselves with. We all want this hellish genocide to stop. But while Viganò rightly condemns the Pope’s complicity with the murderous tyrants behind the New World Order, what he holds out as our hope and strength is the RCC process of salvation continually accomplished in the Eucharistic (Canon 904) and praying to Mary, doctrines that place salvation in the hands of man and an institution rather than in Christ alone.

Faith in Christ Jesus alone is the great and sure mark of the Holy Spirit’s work in every believer. It is only by His work that we are made partakers of the inheritance of the saints in light and life.

To claim that there is a source of confidence in tradition (man) that is equal to that of Scripture is to speak against the person and work of the Holy Spirit.

In the 1500s, the Reformers believed in five essential biblical principles: (1) truth is known based on the Bible alone, (2) a person is saved by grace alone, (3) through faith alone, (4) in Christ Jesus alone, (5) and consequently all praise and glory to God alone. And yet, Christiandom today is haphazardly tossing away the sound doctrine their forefathers willingly died for to stand together with the very institution that condemned them. (Acknowledgement is given to the factions in the Reformation and abuses of within their ranks, each, as I show in my book, was inspired by the Jesuits. No denomination is free of some degree of error.) Still, how did we get from such conviction to the doctrine-barren, social gospel that marks our time? The answer to that question has filled many books, but we’ll narrow it down for our purposes here.

“The ecumenical movement is the brain child of the Roman Catholic Church. This moment gained momentum during the Second Vatican Council held in Rome from 1962 to 1965. The primary purpose of the ecumenical movement is to draw individuals, groups and churches back into the Roman Catholic religious system. The eventual goal is to enslave all people under the Roman pontiff as head of the “Universal Church”. The movement employs various techniques that range from joint declarations of faith to stadium events filled with people from various denominations [ie The Return of 2019]. All are encouraged to be united through emotional experiences instead of Biblical truth.” Berean Beacon

Even if we’re tempted to minimalize the differences in doctrine between born-in-the-spirit believers and that of Roman Catholicism and are willing to blur the line between the scriptural means of salvation and that of the RCC, we should know that the RCC is not. In fact, the Council of Trent not only condemns true, biblical faith in the sufficiency of Christ’s atonement for our sins, but it calls those trusting it “anathema” (cursed).

“If anyone shall say that justifying faith is nothing else than confidence in the divine mercy which remits sins for Christ’s sake, or that it is this confidence alone by which we are justified: let him be anathema.” (Source: Henry Denzinger, The Sources of Catholic Dogma, Tr. by Roy J Deferrari from Enchiridion Symbolorum, 13th ed. (B. Herder Book Co., 1957), #822.)

Sadly, this dismissal of the adequacy of the atonement is also found in Christian legalism, as exemplified by Charles Finney.

1. “Several theologians have held that regeneration is the work of the Holy Spirit alone … but I might just as lawfully insist that it is the work of man alone.” (Charles Finney, ‘Lectures On Systematic Theology’)

2. “The doctrine of imputed righteousness, or that Christ’s obedience to the Law was accounted as our obedience, is founded on a most false and nonsensical assumption” (Ibid.)

3. Christ “could do no more than justify himself. It can never be imputed to us … it was naturally impossible, then, for him to obey on our behalf.” (Ibid.)

It is also found in every works-based pseudo-Christian cult.

To further their agenda, Ecumenical leaders gathered in the Vatican on October 4 with representatives of other religions, scientists and experts from around the world for “Faith and Science: Towards COP26”. Participants signed a joint appeal in anticipation of the coming UN COP26 Climate Conference that will be held in Glasgow Nov. 1-12.

VATICAN CITY (RNS) — Scientists and religious leaders from all over the world, including Pope Francis, gathered at the Vatican on Monday to present a joint appeal affirming their commitment to protecting the environment and to bridging the divide between faith and science.

“We plead with the international community, gathered at COP26, to take speedy, responsible and shared action to safeguard, restore and heal our wounded humanity and the home entrusted to our stewardship,” a summary of the appeal shared during the event (Oct. 4) reads.

The document, signed by about 40 religious leaders and scientists, was handed to Alok Kumar Sharma, president of the COP26 summit. The summit will gather political leaders from all over the world in Glasgow, Scotland, in November to discuss and reinforce their commitment to protecting the environment.” (emph & bold mine)

More troubling yet is the new One World Religion Headquarters, Abrahamic Family House, on the Saadiyat Island in Abu Dhabi, set to open in 2022.

But in the increasingly totalitarian climate, amidst talk of unity and peace, the schism in the Catholic Church continues to grow.  Not surprisingly, the Vatican has formally come out against Viganò, who enjoys the following of Catholic traditionalists and Evangelicals alike in his stance against Francis. But while they rightly reject the current pontiff’s evil actions and associations, Evangelicals continue to be the same saltless, Ecumenical crowd.

Recommended reading by the both the pope and his predecessor is Robert Benson’s dystopian apocalyptic novel Lord of this World. The book, published in 1907, presents a future where secular humanism has triumphed and religion is suppressed to almost non-existence, it’s protagonist being a Catholic priest who fights to preserve the faith. The novel, which follows the apocalyptic, dispensational script, reflects the insights of English Cardinal John Henry Newman (1801-1890) who wrote that:

“What I have said upon this subject may be summed up as follows: that the coming of Christ will be immediately preceded by a very awful and unparalleled outbreak of evil, called by St. Paul an Apostasy, a falling away, in the midst of which a certain terrible Man of sin and Child of perdition, the special and singular enemy of Christ, or Antichrist, will appear; that this will be when revolutions prevail, and the present framework of society breaks to pieces; and that at present the spirit which he will embody and represent is kept under by “the powers that be,” but that on their dissolution, he will rise out of their bosom and knit them together again in his own evil way, under his own rule, to the exclusion of the Church.”

(As an aside, I can easily see Donald Trump returning in 2024 to take the role of the the novel’s “Felsenburgh.” Not a prediction, but just saying…)

Missing from the novel is the current schism in the RCC, but Francis’ associations and actions are clearly recognizable.

I see this divide in the RCC as a means to prime believers for the destruction of the “whore” (Francis’ RCC) according to the “script” of Revelation and embrace the great, coming spiritual deception. It cannot be by chance that so many sources are coming out with evidence of the truth about these injections – and yet they are not being stopped. I don’t think the intent is to ever stop it, but rather to continue to carry out the enemy’s work to it’s ultimate ends:

Dates and astronomical signs appear to support these dynamics as well, but that would be another post.

As always, I don’t claim to have all the answers. But this much I know; there has never been a more crucial time to make sure your faith is on the solid ground of Jesus Christ alone!

“For there shall arise false Christs, and false prophets, and shall shew great signs and wonders; insomuch that, if it were possible, they shall deceive the very elect.” (Matt 24:24)

Do everything to make your calling and election sure!

Wherefore the rather, brethren, give diligence to make your calling and election sure: for if ye do these things, ye shall never fall:

For so an entrance shall be ministered unto you abundantly into the everlasting kingdom of our Lord and Saviour Jesus Christ.

Wherefore I will not be negligent to put you always in remembrance of these things, though ye know them, and be established in the present truth. (2 Pet 1:9-11)

(Thanks to Petra Fels for her contributing research)